I first caught sight of Vibe’s Shearwater 125 with X-Drive at the last face-to-face ICAST tradeshow. At a three-o’clock meet and greet in the Vibe Kayaks booth, I set my beverage in the Shearwater’s cup holder while company chief Josh Thomas took me on a tour of his latest creation.

It was hard to hear with the music and chatter, but Thomas described a do-it-all boat that would be adaptable to any type of fishing. The prototype holding my beverage was an open-hull concept with an open bow, wide, flat deck and large tankwell. Thomas had the boat mocked up with pods, motors and pedals, but I was anxious to see the finished product.

That didn’t happen until this spring. With ICAST cancelled and the world in a panic, I didn’t receive a Shearwater until the first leaves were on the trees. Turns out the timing was perfect; a kayak fishing craze has swept the country and the Shearwater is poised to be everyman’s boat. 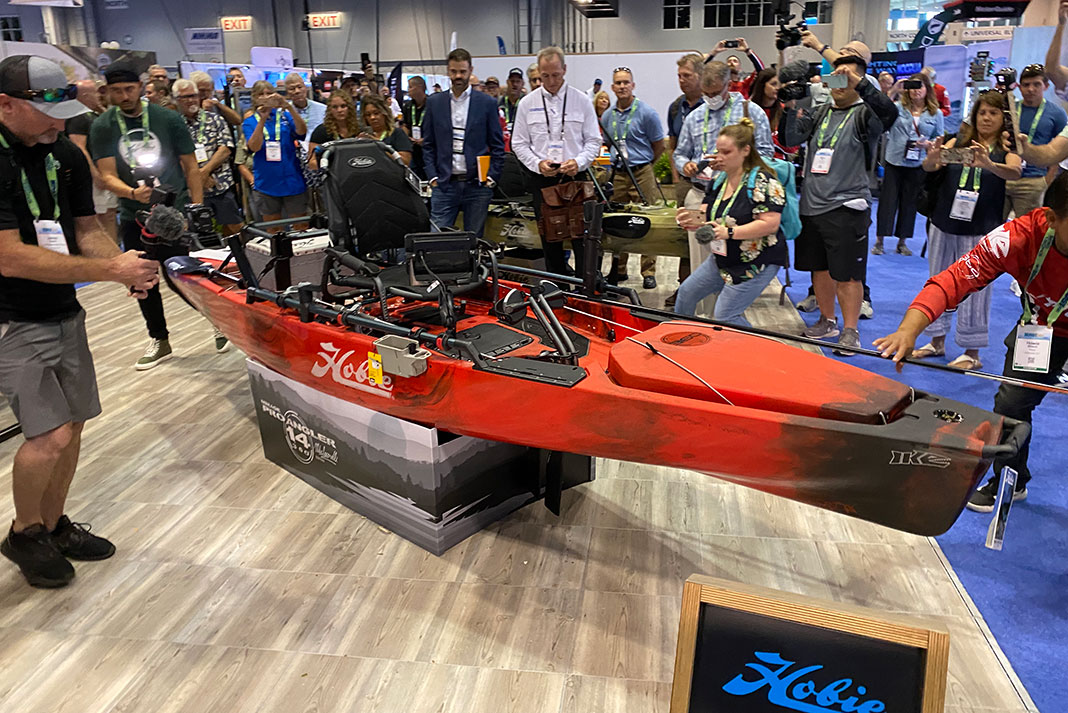 Vibe Kayaks Rounds Out Its Lineup

Vibe Kayaks splashed onto the scene a few years ago with line of smart, utilitarian fishing kayaks at a great price. From the simple Yellowfin to the performance-oriented Sea Ghost, Vibe had the bases covered. But the missing link was a full-feature sled that is at home on a farm pond or the tournament trail. This was the inspiration for the Shearwater 125.

But if you’re going to play with the big boys (think Wilderness Systems ATAK, Bonafide SS127, Old Town Topwater and other pro-level boats) then you better bring your A game.

Which is exactly what Thomas did with the Shearwater. Improving on popular features from other boats in the class, the Shearwater checks all the boxes for a serious fishing platform. But does the new boat keep up with the rest of the pack?

By today’s standards, a padded deck, multiple flush mount and horizontal rod holders, tackle storage, electronics pods and gear tracks come standard on the best kayaks. Vibe had to step it up to stand out. Here’s where they hit the ball out of the park.

The seat, for one. As if to answer the challenge of redesigning the wheel, Vibe took the versatile frame seat serious anglers demand and moved it up a notch. Literally. The high-low seat also reclines and is easy to remove for a completely open deck. To create the ultimate standup kayak, fold the seat forward and add a standing platform.

Moving the seat through the different positions was easy. Perched on top the platform, I could see into the water further and deeper than standing on the deck. Also, the elevated angle makes it easier to pitch a jig and hold my rod tip low to work a twitch bait.

Motor or Pedal with the Shearwater 125

From the factory, the Shearwater is ready to fish with quality components and construction. To take the game to the next level, the boat is available with pedal or motor power.

I received the Shearwater with Vibe’s X-Drive Pedal Kit. Rigging was easy and quick, but I’d like to see a more solid rudder connection. It took some time to dial in the cables and get both systems working properly. The rudder can be rigged to operate with foot pedals when I’m paddling. Or, when I’m pedaling the X-Drive, a control dial next to the seat turns the boat.

To use the pedal kit, I removed the flat center panel and installed the pedal well. The X-Drive is similar to Hobie’s original MirageDrive, kicking the pedals forward and back make flippers flap below the boat. Fans of the MirageDrive claim the system is easier on the legs and moves more water than a propeller. I would say the advantages of propellers and flippers even out and it comes down to personal choice. 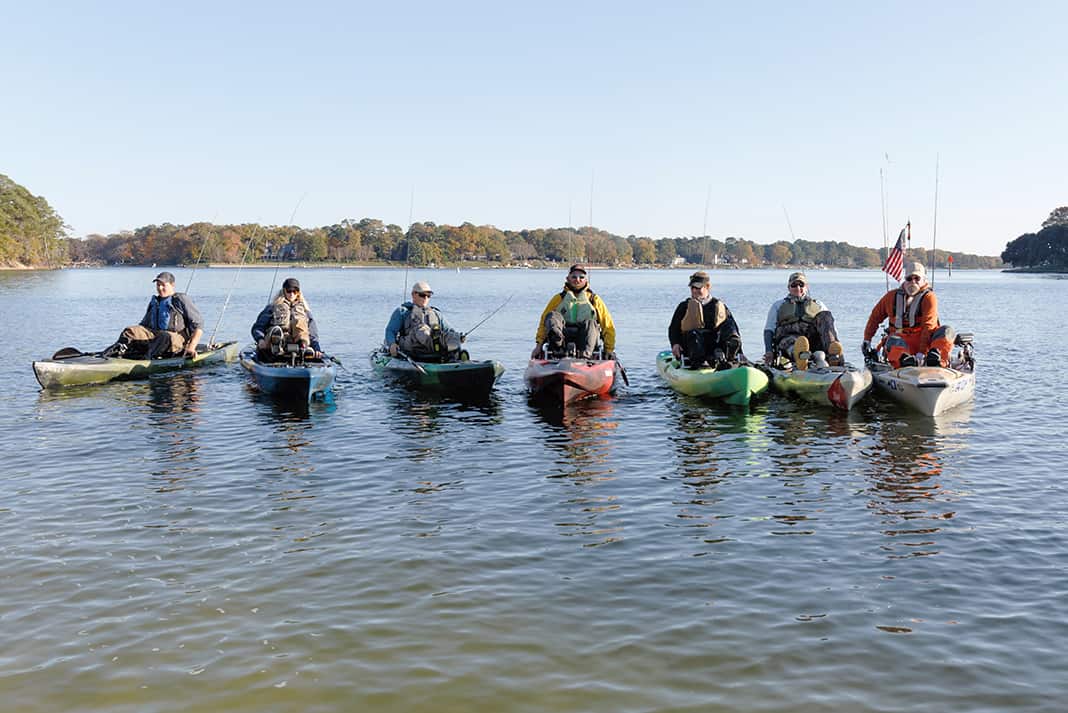 In our Pedal Boat Shootout, we found that flipper systems tend to have more torque but slightly less top-end speed. The advantage is Vibe’s pedal well accepts any Hobie MirageDrive system (except the MD360). During my tour of the prototype at ICAST, Thomas told me he hopes to offer more pedal well options so anglers can pair the Shearwater with other systems.

While the X-Drive is simple and sturdy and will provide many happy hours of pedaling, the system is not the most advanced or powerful. And, it doesn’t have reverse. If those are dealbreakers, then plan to upgrade to a Hobie MirageDrive 180. If not, the X-Drive is a reliable pedal system at a fraction of the cost.

Same goes with the factory available motor option. Vibe partnered with Bixpy to offer an electric motor option to the Shearwater platform. The Bixpy system is a football-sized, torpedo-shaped propeller powered by a waterproof lithium-ion battery and handheld remote control.

The Shearwater is a perfect match for the Bixpy motor. The mounting bracket fits on the rudder and the battery tucks into the tankwell. To add more power, the Shearwater has plenty of room for an electric outboard or trolling motor. Again, Vibe offers the reliable and functional Bixpy to get the job done with the option to upgrade to a more powerful electric outboard or trolling motor.

On the water, the Shearwater performed as expected for a standup kayak. It’s super stable with plenty of deck space. The frame seat, wide beam and flat hull are not friendly for straight-line performance or heavy seas, but that’s not what the Shearwater is about. As a paddle kayak, the Shearwater is best for standup fishing in backwaters and flats, farm ponds and lakes.

Adding the X-Drive gives the capable kayak a wider range than would be available with a paddle. With pedals, the Shearwater turns into a serious fishing boat that can cover miles of water and unpredictable conditions.

While I was pedaling the Vibe Shearwater to my favorite spring trout hole, I couldn’t help recalling my conversation with Josh Thomas on the ICAST floor. His vision of a full-feature fishing kayak satisfying serious anglers and still serving a casual audience was now covered in saltwater and fish slime.

After a season testing the Shearwater, I certify the new boat as a standup paddle kayak or formidable pedal kayak. Comparing the Shearwater to similar boats in the class, I couldn’t find anywhere Vibe fell short, except the low price. Whether you’re looking for a reliable fishing platform or a tournament-ready plastic bass boat, the Shearwater is a capable platform to realize your kayak fishing goals.

5 Questions To Ask Before...