Do you need a kayak you can store in a closet? Are you looking for a boat to take on the bus? Wouldn’t it be great to go on vacation and bring your kayak on the plane? If you answered yes to any of these questions, you’re probably in the market for an inflatable kayak. If you’re looking for versatility and a pedal drive, then your best option is a Hobie Mirage iTrek.

The latest model to enter the four-boat Hobie inflatable fleet, the Mirage iTrek 14 Duo is a tandem pedal kayak that folds up into a rolling bag. After Kayak Angler contributor Lisa Ballard tested the pocket-sized Mirage iTrek 9, I was anxious to find out if the big sister would live up to the family’s reputation. 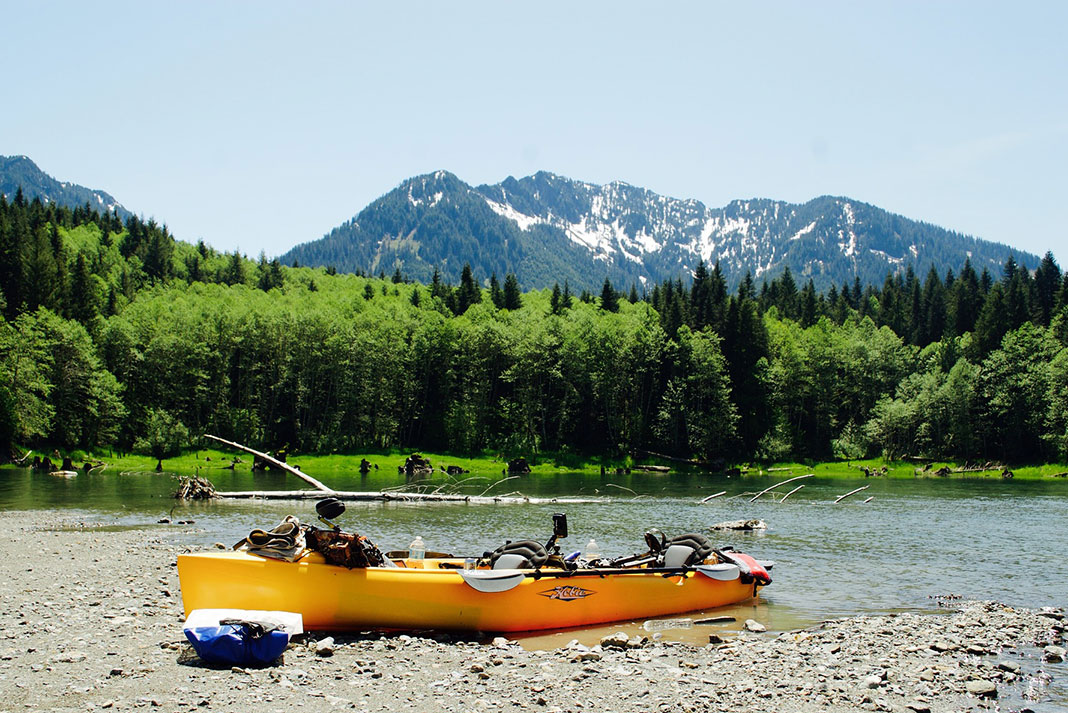 When a Hobie Mirage iTrek 14 Duo arrived at the Kayak Angler office, everyone fought over who would borrow the fun and fishy family sled for the weekend.

One weekend, the boat was on a camping trip to the lake. The next weekend, the iTrek spent a day at a hidden bass pond. Birdwatchers explored the swamps and anglers worked the backwaters. The iTrek 14 Duo is at home fishing the lily pads, taking the family for a nature outing or pulling up to the sandbar party.

To combine packability with performance, the iTrek 14 Duo is 13 feet, eight inches long, with just enough space for two people and a handful of gear. At 44 inches wide, the Duo is super stable yet cuts through the water with little effort. Best of all, the inflatable only weighs 45 pounds empty and 73 pounds fully rigged, so it’s possible for one person to carry.

The secret to the iTrek’s success as a portable tandem pedal kayak is the simple design. The iTrek looks like a standup paddleboard with a flat drop stich deck supported by low-pressure chambers along the rails. The design is stable and compact. Add the MirageDrive pedal system and the iTrek will keep up with any pedal kayak on the water.

To turn the Mirage iTrek Duo 14 into a fishing kayak, I added a Hobie H-Crate to the bungees in the stern. The 13- by 13- inch crate fits perfectly with room for four rods and a couple of tackle trays.

To the front bungees, I strapped a waterproof deck bag to hold lunch and rain gear. If I was rigging the iTrek for serious two-person fishing missions, I would install an adhesive accessory base and an elevated rod holder like a Scotty 341 Glue-on Mount Pad and 241 Side Deck Mount accessory base.

Since our iTrek 14 was a loaner boat, I kept rigging to the basics, but with a little creativity, the iTrek 14 Duo could be turned into a functional fishing kayak.

The star of the show is Hobie’s MirageDrive GT with Kick-Up Fins. Installing the drive in an inflatable kayak puts performance on par with a hard plastic kayak.

The MirageDrive GT stands for Glide Technology. Using corrosion-resistant ball bearings and simple but robust construction, the GT is ready for years of efficient performance.

The coolest feature is the Kick-Up Fins. When the fins hit an underwater obstruction, they fold flat against the hull until the danger passes.

With the Kick-Up Fins, I didn’t worry about lending the Mirage iTrek 14 Duo to inexperienced pedalers. The feature makes the kayak virtually kid-proof, too. Running aground is the greatest threat to pedal drive systems, and the fins go a long way to extend the life of the MirageDrive.

On the Water Performance

When it was my weekend to borrow the iTrek 14 Duo, I put together a plan worthy of the Dad Hall of Fame.

My 21-year-old daughter Daria was home from college and mentioned she wanted to go fishing. Before she had a chance to run off with friends or disappear into her room, I nailed down an exact date and time for the fishing trip.

The beautiful part of the scheme involves the iTrek 14 Duo. Usually, Daria would take her Wilderness Systems Tarpon 12 and I would climb into my Ocean Kayak Trident 13. We might start the trip chatting and paddling, but eventually, I become consumed with casting to a rock while Daria wanders off to look at birds and butterflies.

Not this time. When Daria came out of the house, instead of her kayak loaded onto the trailer, she found the iTrek strapped to the roof rack.

I expected her to protest, but she was intrigued by the two-seat pedal kayak.

Once we got to the launch, the light and portable iTrek made it easy to go from the car to the water. Since I wasn’t worried about carting two heavy kayaks to the water, I chose an out-of-the-way spot where nothing would disrupt our daddy-daughter time.

The iTrek 14 Duo made fishing easy. I’ve tested almost every make and model of Hobie kayak and I’m always impressed with the design and construction. All parts work as intended and function reliably.

The elevated seats are comfortable and at the correct angle for efficient pedaling. I would love to see Hobie’s Vantage seats in the iTrek boats, but that would add weight and bulk, making it more difficult to pack the seats into the carry case.

Hobie’s removable rudder drops into a bracket in the stern and connects to the controller with a flexible cable. The rudder is perfectly matched to turn the long tandem kayak.

Hobie included a three-piece aluminum paddle to move the boat in reverse or get into tight spaces. When we reached a shallow fishing area and retracted the fins, the paddle was sufficient to maneuver the shallow draft inflatable while Daria fished from the bow.

The iTrek was so stable, before long, Daria and I were both standing and fishing. The drop stitch deck provided a steady platform for standing and kept the boat from wobbling or folding under pressure.

With rock-solid stability and easy operation, the iTrek instilled confidence to fish and have fun without worrying about paddling or falling overboard. Daria and I cast, retrieved and pedaled while chatting and laughing, my plan worked perfectly.

The true test of an inflatable kayak is packing the boat into its carrying case. Hobie helps the process by including a huge storage case.

With a little work, I fit the folded kayak, seats, paddle and rudder into the case with room to spare. Yet, the package is small enough to carry in a hatchback and store in a broom closet.

I always wanted a tandem kayak, but I don’t have room for another boat in my yard. The packable, inflatable pedal-powered tandem is a sensible solution. When the objective is family time with a side of fishing, the Mirage iTrek 14 Duo is the platform for focusing on what is most important—having fun with a favorite person.

Take a look at the most streamlined and lightweight, tandem pedal kayak by Hobie. Completely redesigned from the bottom up, its rugged PVC hull quickly inflates into a rigid and durable platform, perfect for long days on the water. And when you’re all done for the day, the iTrek 14 easily deflates and stows away into its rolling travel bag. Powered by two MirageDrives with Glide Technology and patented Kick-Up Fins, this tandem kayak is perfect for couples and families.
Learn more