Kayak Angler contributor and Hobie team member Raf Vargas is a 22-year veteran of the U.S. Air Force. He spent his first years in the service stationed in Louisiana where he learned how to bass fish. Ten years later, while stationed in Nebraska, Vargas started fishing from a 10-foot-long sit-inside kayak. As Vargas’ proficiency with bass fishing improved, and kayak fishing became more popular, he gathered like-minded locals and started the Midwest Kayak Fishing Series tournament.

The bass trail was a big hit and Vargas organized other events for middle-America anglers. As Vargas built steam on the bass scene, he got news both good and bad. He would have to abandon his tournament series because the Air Force was transferring him to Guam, an island paradise in the middle of the Pacific Ocean. We pick up Vargas’ story as he lands on Guam, a fanatical kayak bass angler thousands of miles from the nearest largemouth.

After living the good life in Nebraska and Kansas, my Air Force career took me to an assignment of a lifetime: Guam. As a B-52 “Crewdog,” I knew it was going to be my best assignment. I couldn’t decide whether I was more excited about my career opportunities in Guam or the fishing opportunities.

What Happens When a Kayak Bass Fisherman Enters Bluewater

I thought saltwater fishing was easy. I packed tackle for mangrove snapper and tilapia, abundant backwater fish reminding me of my beloved bass. Inshore fishing in the jungle rivers was action-packed, but not as challenging as targeting black bass back home. It didn’t take long before the deep, blue water surrounding the island started calling my name.

Guam is a U.S. territory located in the western Pacific. The island is roughly 30 miles long and 15 miles wide. The history, culture, and way of life pivots around a strong lineage of the Chamorro culture and fishing heritage. The island’s natives still use fishing practices dating back to their ancestors 4,000 years ago. Although English is the official language, most of the fish species are still known by their original Chamorro names. Learning the language offers the opportunity to connect with locals and understand the culture. People from Guam are well known for their ocean passion, exquisite island food, and friendliness.

Folks on Guam have been kayak fishing for years, but we needed a way to come together as a group.

As soon as I arrived, I created the Guam Yakers Facebook group. In three years, we gained over 800 kayak fishing friends. This was the first step in connecting with great people who helped me achieve some milestones. We collectively put our brains together and explored new techniques, lures, and presentations. As we continue to push the boundaries, the community continues to grow.

[ See also: Find All The Answers On The Best Kayak Fishing Forums ]

Through the Facebook group we organized outings, demos, small-scale tournaments, and get-togethers. We fish all day and then chill at the beach while grilling our catch and soaking in the island life. Sometimes all it takes is saying hafa adai, which means hello in Chamorro. The locals call it “GUd Vibes” from Guam’s two-letter postal abbreviation.

A typical kayak fishing weekend in Guam starts with the weather forecast, especially the ocean conditions. Wind and swell direction are our biggest potential hazards. We decide where to fish depending on the conditions. Miscalculating the weather and swell could be a fatal decision. A slight change in swell direction and huge waves will break on the reef, preventing us from going out or coming back in. We always put safety first when launching the fleet.

What are the Challenges of Changing to Bluewater?

One of the challenges is learning to catch wary pelagic fish from a kayak. When I first started, I mostly caught mahi-mahi. After a few trips, I wanted to catch a wahoo. The lure I wanted to use for wahoo should move fast to work properly. Since pedaling my kayak won’t produce the speed, I cut a rubber skirt from a trolling lure and pulled it over the swimming plug to give it more action.

The next day, I was on the water before sunrise. As soon as I passed the outer reef, I got a violent strike on my trolling rod. My reel screamed as I fought a powerful fish. After a long battle, and the fish’s continuous efforts to dive deeper and deeper, I finally saw its shape. I caught my first wahoo on my homemade lure.

The west side of the island hosts offshore buoys called fish aggregating devices (FADs). The buoys are spread out from five to 11 miles offshore, anchored with 4,000-pound concrete blocks in 3,000 to 5,000 feet of water. Algae on the anchor chains attract small fish bringing in larger predators. Fishing boats troll around the buoys in hopes of catching blue marlin.

This far offshore, the average swell is nine feet. We must choose our days very carefully before making the long trip to a FAD.

The first time we made the trip was the first time anyone on the island had fished a FAD in a kayak. The Guam Yakers like to tease about who will be the first to catch a marlin. We headed to the FAD in hopes of making this dream come true.

It was a clear day with gentle rollers and calm winds. Predominant winds are always from the east, so a six-mile trip to the west with strong winds would mean a direct headwind on the way back.

When we reached the FAD, we did not catch a marlin. Luckily, Bryan Hiura hooked a feisty mahi on the way back. Even if we didn’t get the billfish, our first FAD milestone opened the offshore buoys to our attention. After our long-distance trip, the Guam fishing community calls us “those crazy kayakers.”

I normally set up my trolling rods with a topwater lure as well as a deeper lure. Occasionally, I will troll a live flying fish or big eye scad, also known as atulai.

Catching live bait is very time consuming. I knew I had to improvise a way to catch bait without missing the morning bite. I often attach a camera to my line to film fish chasing my lure. After watching the video, I discovered flying fish are inquisitive little critters. I decided to develop my own rig while not compromising the action of the big lure.

Starting with a four-inch trolling lure, I add a two-inch trailer of 10-pound monofilament and a small spoon. The first day I tried the rig it worked. We quickly caught live bait and the trailer didn’t dissuade the trophy species. Now we troll for big fish and bait at the same time.

My typical inventory for a day of kayak fishing includes two trolling and two jigging combos with one casting rod. When trolling does not generate any bites, I fall back on vertical jigging.

Vertical jigging from a kayak is challenging. The boat is low to the water, madly jigging the rod while cranking the reel is exhausting and hooking a big fish is tough. After suffering rookie mistakes and missed hookups, my buddy John Barber coached me through early attempts. Soon, I was catching all types of fish on the jigs.

As I spent more time jigging, I studied different techniques and setups through online videos. I discovered slow-pitch jigging works best for me.

Japanese anglers, who have perfected the art of vertical jigging, believe less is more. I started to mimic their techniques. According to renown Japanese anglers like Norihiro Sato, lighter equipment, lighter line and smaller hardware is the path to more hookups. I use 200- to 260-gram jigs to reach targeted depths over 600 feet. I now spool my reels with 40-pound braid connected with a FG knot to 25 feet of 30-pound fluorocarbon leader.

When slow pitch jigging, it is imperative to maintain a steady sequence of stop and go in each pitch while keeping the rod movement consistent and quickly turning the reel handle. The upward acceleration of the jig, added to the whipping movement of the rod, receives plenty of attention from predators. When bringing the rod down, slow pitch jigs will continue to dance sideways. Many times, the fish bite on the fall.

We have hooked amazing fish with vertical jigs including amberjacks and giant trevallies, wahoo, tuna, mahi-mahi, red and grey snapper, and shark.

Every time I hook a fish and the reel starts to scream, I feel like a five-year-old at Christmas. No matter what fish is at the end of the line, the excitement and adrenaline intensify when fishing from a kayak.

Guam is an incredible place to live. The fishing is phenomenal, but the friends and bonds made along the way are what make this place an unforgettable experience. While I look forward to finishing my assignment in Guam and heading home, it may be hard to go back to kayak bass fishing. 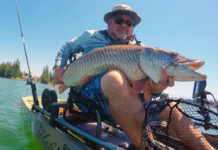 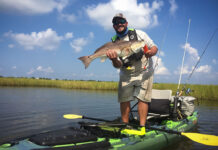 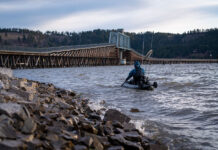 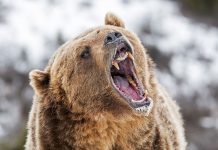