The following is from a press release courtesy of AIRBORN Inflatable Boats.

“TREASURE CAY, Bahamas (Jan. 31, 2014)– AIRBORN Inflatable Boats™ will introduce a new inflatable Stand Up Paddle Board specifically designed for fishing at the upcoming Atlantic City Boat Show at the Atlantic City Convention Center.  The FishDeck™ is 10 feet by six inches long, 34 inches wide and weighs only 28 pounds.  The FishDeck is designed with travel in mind and packs in the trunk of a small car or checks as standard baggage on most airlines.

Dick Swan, AIRBORN’s owner and CEO, said, “The market for recreational Stand Up Paddle Boards is exploding.  But only a few boards have been designed specifically for anglers.  We started experimenting with paddle boards for fishing in the spring of 2013 and found them to be an outstanding tool for the solo angler.  They are a simple craft that can be launched anywhere. The FishDeck™ floats in 3 inches of water and can be paddled standing up allowing the angler to see feeding fish at distances of up to a hundred yards away.”

The high quality inflatable FishDeck is unique in that it is 2 inches thicker and 4 inches wider than the average Stand Up Paddle Board.  It also has a lot more surface area allowing for increased stability.  The shallow draft of the FishDeck allows anglers to approach feeding fish other boats just can’t reach.  “We think the FishDeck will be the go-to craft for the float tube crowd.  You can easily stand up, stay dry and move quickly to rising fish without the need for waders or swim fins,” said Swan. 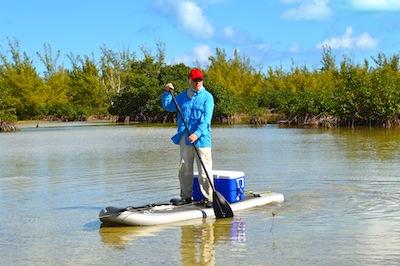 This new paddle board is equipped with a non-slip deck pad and 15 D-rings to tie down a cooler and other gear.  The split tail design allows anglers to quickly stake out their position when they see fish.  For those long days on the water an optional ice cooler makes an excellent seat.  In fact, the FishDeck can be paddled with a kayak paddle while using the cooler as a seat.  This feature has great appeal for the angler who doesn’t feel comfortable paddling from a standing position.  In this mode the FishDeck™ is as easy to maneuver as a kayak.  The cooler not only serves as a seat but as a storage chest for gear, lunch and beverages.

The benefits and unique features of this new craft will be on display in on-water demonstrations at the casting pond sponsored by the American Fly Fishing Schools at the Atlantic City Boat Show Feb. 5-9. Interested attendees will have a chance to try it out in the 50-foot long casting pond. The new FishDeck has a suggested retail of $1,250.00 and will be available for purchase online at www.airbornboats.com and at quality dealers this spring.

View AIRBORN’s YouTube channel for an informational video about the innovative FishDeck. For the latest information on AIRBORN products please visit us on Facebook at http://www.facebook.com/AirbornBoats. 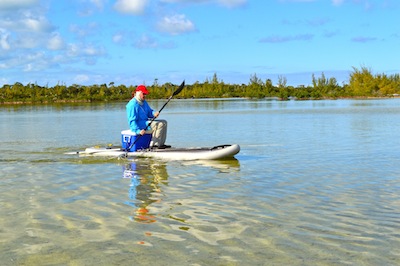 AIRBORN™ is an inflatable boat company founded in the summer of 2012 by Richard Swan, an avid fly fisherman and entrepreneur. Formerly, Swan was the CEO and Founder of Glacier Glove® based in Reno, Nev. Glacier Glove® is best known for the introduction of neoprene fishing gloves to the market in 1983. The innovation allowed anglers to fish in comfort in cold weather.” 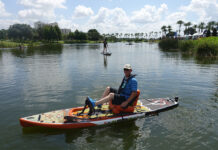 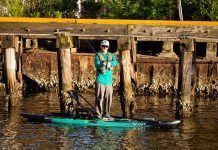 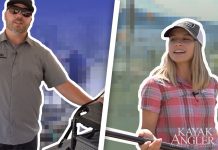