@lucas.decasper My buddies reaction to me being stalked by a great white. #fishing #shark #crazy ♬ original sound – Lucas

Lucas Decasper was kayak fishing off Pigeon Point in California when what appears to be a juvenile great white shark approached his boat. DeCasper’s commentary in his encounter video, asking his nearby friend for advice, is something many without experience in the situation would likely ask. Decasper’s friend Danny Bernardo had a classic what else are you to do response, “Film it.”

In an interview with local news station ABC7, Decasper reveals the catch he was trying to document drew the attention of the shark. The encounter lasted longer than the video clip, with the shark making multiple passes. In the interview with ABC7 Decasper adds that after the pass in the video the decided to head back to shore. The shark again approached them with what Decasper described as aggressive behavior.

Decasper told ABC7 he’d likely head out to Pigeon Point to fish again, but with a bigger boat. We’d have to assess that being a good call as well. We are all about fishing with the kayak you’ve got, but the Clearwater Affinity 8.6 it appears Decasper is using seems bold for fishing the rocky surf along the beaches off the cold Pacific coast. Not only is the boat pretty small, but a sit-inside recreational kayak without bulkheads could create a difficult scenario in the environment were Decasper to capsize. If the angler needs any advice on his next kayak for fishing sharky waters off California we have a few in mind. 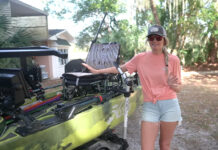 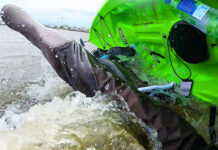 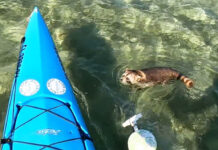 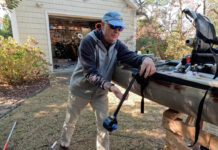