The most valuable fish in America is inedible to humans and impossible to catch with hook and line. However, the battle over menhaden management has been one of the nastiest fights in fisheries history. Last winter, conservationists scored a huge victory in protecting the defenseless menhaden. But the war is far from over.

Why are Menhaden So Important?

Menhaden are small, silvery fish swimming in huge schools from New England to the Gulf of Mexico. An important part of the marine ecosystem, menhaden filter water and serve as a food source for many fish and crustaceans.

Even though they are too boney and oily for humans to eat, menhaden are a valuable source of Omega 3 oils used in health food and cosmetics. The little fish’s biggest contribution is high-protein feed for livestock and fish farms.

Over the past 50 years, increased regulations on the menhaden harvest has depleted the industry to one company, Omega Protein, and a handful of reduction facilities. Many states have banned the fleet from their waters, leaving Virginia’s Chesapeake Bay as ground zero in the menhaden battle.

In Virginia, every recreationally or commercially valuable fish—except menhaden—is regulated by Virginia Marine Resource Commission. Instead of science-based management used by VMRC, menhaden limits are set by the General Assembly. In 2019, the State and Omega worked together to place a cap on the menhaden catch in Chesapeake Bay.

Last fall, when the fleet exceeded the cap, Virginia’s Governor Ralph Northam and Maryland Governor Larry Hogan, asked the Secretary of Commerce Wilbur Ross to intervene and the fishery was shut down. According to a statement by Omega Protein, “poor ocean conditions, and an abundance of menhaden just inside the bay, led to higher Bay harvests.”

In their defense, Omega points out that Bay harvest is historically low, the fishery has been labeled healthy by National Oceanographic and Atmospheric Administration (NOAA) and the current cap is not based on scientific evidence of overfishing. “It is the first time ever that the Commission has recommended non-compliance for a healthy fishery,” Omega states.

A Victory for Anglers and Conservationists

While the menhaden fleet will most likely return to work at the beginning of the season, the victory is seen as a sea change in fisheries management. Dr. Ken Neill III, a commissioner on the VMRC board, says “This is a really exciting time, a time I thought I would never see.”

In addition to serving on the Commission, Neill is also an enthusiastic angler. “Menhaden definitely have an impact on local fishing,” he says. He’s seen good fishing before a menhaden harvest, then the local action drop off after the fleet leaves. However, Neill points out that the menhaden fleet has been active in the Chesapeake for almost 100 years, “through the glory days and declines of the striped bass population.”

For Virginia Beach charter captain Trey Ritter, there is a definite correlation between menhaden and his business. “I’ve seen dead cobia, red drum and striped bass floating in the wake of the menhaden fleet,” he says. According to Ritter, local guides put together a “gentleman’s agreement” with the menhaden fleet to avoid to the Virginia Beach Oceanfront. “Without menhaden, our sportfish do not have a food source to rely on.”

Even though the menhaden fleet will return to Chesapeake Bay as soon as they comply with the ASMFC menhaden plan, environmental activists are encouraged by the development. Chris Dollar, menhaden campain manager of the Theodore Roosevelt Conservation Partnership, says, “No single state or entity should be able to blatantly ignore regional fisheries plans at the expense of other businesses and recreational fishermen.”

Moving Toward Scientific Management of Menhaden

Dollar says the conservation community is hoping for two results. “First, the ASMFC must adopt Ecological Reference Points,” he says. These science-based numbers would give regulatory agencies the basis for catch limits. “Second, the Virginia Assembly must vote to turn over menhaden management to the scientists and experts at VMRC,” he says. In February, the Responsible Fisheries Management Act passed the Assembly, transferring management to VMRC.

Whatever the results, the menhaden fleet will still fish Chesapeake Bay and conservationists will continue to fight for reasonable management. VMRC commissioner Ken Neill says, “Instead of managing for maximum harvest, we are managing fisheries as a part of an ecosystem.” Recent moves in menhaden management are a major shift in that trend.

The True Value Of Fishing Licenses 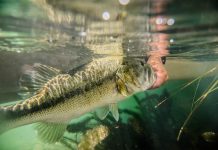