Author C.S. Lewis is credited with the quote, “Integrity is doing the right thing even when nobody is looking.” For anglers, that means following the fishing rules even when the game warden isn’t around. But one angler imposed his own regulations, beyond what is required by law, and the idea is catching on. Saltwater anglers are increasingly signing on to set an upper limit on speckled trout to ensure their breeding success.

[ See also: Back To School—Speckled Trout ]

Freshwater bass anglers gladly release trophy largemouth, even though they could take their catch home. It wasn’t always this way. Before Bassmaster founder Ray Scott started the Don’t Kill Your Catch program in 1971, anglers would return from the bass pond with a stringer of bucketmouths.

Recently, the concept hit saltwater and caught on like wildfire. A movement to release large speckled trout has spread across the country and it’s having an effect.

Speckled sea trout are a favorite target from the mid-Atlantic to the Gulf Coast. The fish are prolific, but their populations are fickle. Some years, anglers have an abundance of big spotted trout and other years the fish are scarce.

One Man Starts a Movement

David Fladd is a speckled trout enthusiast from South Carolina. He is also one of the founders of tackle manufacturer Eye Strike Fishing. “I was wondering why there wasn’t an upper size limit for speckled trout,” he recalls. South Carolina anglers can keep 10 trout over 14 inches. So, he set his own upper limit, “I decided to release any trout over 20 inches.”

As Fladd shared his voluntary size limit on social media, his friends joined in the effort. But the movement really picked up steam when it reached Joe Neely’s ears. Neely is regional director at North Carolina’s branch of the Coastal Conservation Association. Fladd remembers, “I was talking about my size limit on Eastern Currents podcast and Joe Neely heard me.”

With Neely’s encouragement, and support from the country’s largest conservation organization, Fladd’s Release Over 20 became a legit conservation effort. “Coastal Conservation Association NC has focused on promoting the initiative in North Carolina and I’ve run the movement nationwide,” Fladd says.

The Release Over 20 Rulebook

Here’s how it works. An angler catches a speckled trout over 20 inches, takes a photo of the fish and uploads to a smartphone-friendly online form at ReleaseOver20.com. For registering a release, the angler receives decals and is entered for a monthly prize. “Prizes are donated by sponsors and our funding comes from donations and apparel sales,” Fladd says. He adds 100 percent of the money goes back into the program.

The wider Fladd cast his net, the more anglers he caught. “I’m amazed at the people I’ve met,” he says. For example, November’s winner from Virginia works for an outdoor advertising agency. One thing led to another and Release Over 20 was displayed on digital billboards in Virginia and South Carolina. The digital signs are programmed to display photos of participants and their catch.

After the success of the speckled trout program, Fladd is adding flounder to the initiative. Flounder populations have been on the decline coastwide, and current regulations don’t seem to be stemming the dive. Fladd says South Carolina’s Department of Natural Resources has determined flounder catches need to decline 70 percent for the fish to recover. However, flounder are incredibly valuable to recreational and commercial anglers and a huge catch reduction would not be popular. So, where fisheries management falls short, Fladd says anglers have to take responsibility.

“Any flounder over 13 inches is probably a female,” he says. But what good is a released fish if it dies after the encounter? “This year, we’re going to focus more on education and proper catch and release skills,” Fladd says.

Anglers Choose Their Own Limits

The concept of voluntary catch and release isn’t new, and many anglers already release fish they could keep. But programs like Release Over 20 are changing attitudes among new anglers. While there’s no way to measure the effect, if the fisheries managers won’t do what it takes to save threatened fisheries, then anglers will have to step in. 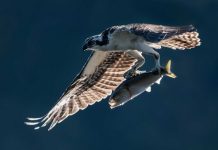