Grabbing a slimy, flailing fish while balancing on a kayak—and avoiding the sharp fishhooks, too—is one of the most difficult and dangerous aspects of the sport. The trick is choosing tools that are small enough to fit in the kayak and tough enough to survive hand-to-fin combat. To help your end game, we collected four of the most useful gaffs and grippers for kayak fishing.

Gaffs and Grippers for Kayak Fishing

A whole day of fishing comes down to just a few seconds. Your trophy catch is between the water and the kayak. Time to seal the deal. Don’t screw up!

Among bluewater anglers, the Hawaiian kage has become a popular way to handle toothy fish. A kage is a short spear with a long, narrow point. When the fish is close, the angler jabs the point in the gills, securing the fish and finishing it off. If the fish freaks out and explodes in wall of spray, simply release the spear and let the fish run itself out. Once in the boat, the tip is easy to control. The Spear Gaff by ProYaker has a 46-inch handle that floats. The spear is ribbed to hold the fish and all components are stainless steel. Unlike a gaff, the kage’s point faces away from the angler, making it safer to use in a smaller fishing kayak.

A fish gripper is one of the most ubiquitous accessories. From largemouth bass to striped bass, grabbing the fish by the lip is the best way to protect the catch and the angler. Keep the grips in reach with YakGear’s Fish Grip Lock, which attaches to any gear track. Fish Grip’s vice-like grips lock onto the fish’s lip. When landing a trophy, the best plan is net the fish, then attach the lip grip to keep the catch from kicking out of the boat. Fish grips make great tool for releasing the fish, too. Attach a four-foot tether to the grippers and swim the fish beside the boat until it kicks on its own.

Show off your trophy catch and the first question is, “How much did it weigh?” For ultimate bragging rights, Rapala’s Mechanical Scale and Fish Gripper secures and weighs the fish. For the most accurate measurement of length and weight, first use the lip gripper to hold the trophy on a measuring board. Then, lift the fish with the gripper and take its weight. Hold the fish horizontally and take a couple photos. Rapala’s Fish Grippers are corrosion resistant for years of safe releases.

No one knows more about fish gaffs than AFTCO. Nearly every boat on the water has at least one of their premium aluminum gaffs under the gunwale. The company’s iconic gold or black anodized shaft is light and strong for lightning fast reactions. With a dozen models in a half dozen lengths and hook gaps, the best option is a three-foot shaft and two-inch bite. Using a gaff while kayak fishing allows you to land the fish quickly, with little chance of it getting free. For toothed fish, the gaff will control the fish’s head. Always keep the hook covered when not in use.

Most important: be ready for the end game. | Feature photo: Jason Schall 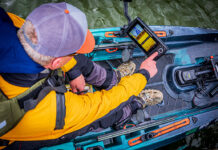 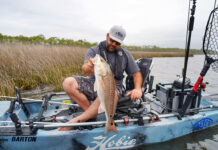