As soon as I received Ocean Kayak’s redesigned Prowler Big Game II for testing, I launched it on the local farm pond to kick the tires and chase smallmouth bass. The boat is stable enough for sight fishing and maneuverable enough to scoot around the sheltered waters.

A few weeks later, I took the Big Game II after striped bass on the sandy flats around Cape Cod where it proved just as capable in coastal chop as on a sylvan pond. The flared bow easily cuts through the surf and the boat tracks straight.

While no kayak will do it all, Ocean Kayak’s modifications to their already popular Big Game make it a boat that can go from backwater to open water without missing a beat. And, with a capacity of 600 pounds, you won’t miss any gear, either. 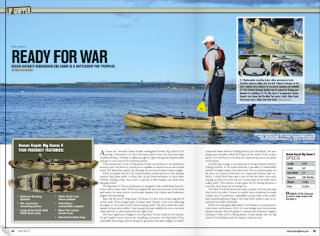