Diamond Shoals on the eastern tip of Hatteras Island, North Carolina, is known as the Graveyard of the Atlantic because the confluence of the Gulf Stream and Labrador Current has claimed many ships and many lives. In this roiling cauldron of saltwater, I met kayak fishing guide and Wilderness Systems pro staffer Rob Alderman to test the new Thresher.

As soon as we unloaded the 140 and 155, product designer Dave Maughan took me on a tour of the design features and fishing accessories. He told me how they had refined the hull to include enough rocker to perform in the surf yet maintain steady tracking. The boat carries a lot of volume in the bow to crash over waves while flared sidewalls provide stability.

On the topside…Click here to continue reading in the free desktop edition of Kayak Angler, Summer/Fall 2014. 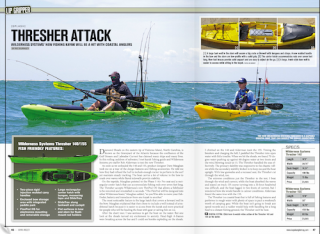 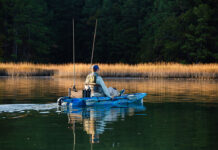