Smallmouth bass may generally considered a smaller species of fish but they cannot be underestimated according to Wilderness Systems pro and river guide Jedediah Plunkert. With the Susquehanna and Potomac rivers running through his backyard, he’s learned to love his neighbors.

River smallmouth live in a moving world. Any baitfish that stops swimming is turned into a meal. Plunkert’s favorite technique gives smallies a stationary target they can’t resist. When he’s fishing an area with slower current, he drops a jig and low-profile soft plastic fluke or crawdad to the bottom and lets it sit motionless. “Keep the line tight and use your fingers to feel for the slightest tap,” he suggests. Plunkert lets the current do the work. “I picture the lure gen- tly undulating on the bottom until—whammo!” he says. 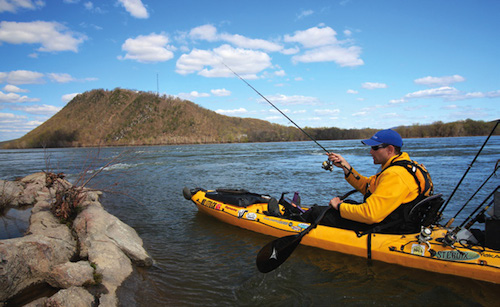 “River fishing requires a particular skill set,” Plunkert says, “both to fish and to paddle.” To survive a rapid, Plunkert says aim for the V. “Shoot for the meat,” he says, explaining that the water creates an inverted V shape as it travels between rocks. “The deepest water will usually be in the center of the V, improving the chances that you get through without hitting anything or turning sideways,” Plunkert says. After clearing the whitewater, Plunkert suggests making a U- turn. “Smallies like to hold in eddies of slow water on either side of the rapid.”

“Losing a big fish at the boat is painful,” Plunkert admits. Smallmouth jump, run and dive making them difficult to hook and land. “A floating landing net is essential,” he insists. When the fish is within reach, Plunkert instructs anglers to leave the net in the water and use the rod tip to direct the fish to the net. When the fish is over the net, lift up and scoop the fish into the boat. “Don’t chase the fish with the net like Keystone Cops,” he laughs. 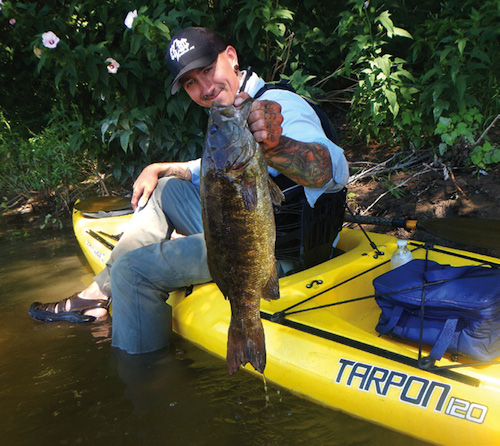 S2 Slider Compact Net: This net not only floats, but the handle extends to reach out and grab the fish of a lifetime. Retract the handle to store in the kayak. Rubber net- ting is easy on fish scales and slime coat, improving release survival. www.egos2slider.com.