It’s not a fishing kayak, but you can paddle, row or buzz around with a motor on the Flycraft Stealth inflatable fishing boat. Blast through rapids and fish all day long in this versatile inflatable craft that crosses lightweight portability with rock solid construction.

Weight: 98 lbs
(without oars and basket)

Flycraft Stealth Blows Up the Competition

When I first saw the Stealth from Flycraft USA I couldn’t wait to get my hands on one and test it out for myself. Upon arrival I inflated the boat and, after about ten minutes of preparation, tossed the lightweight craft onto my truck’s roof—yes, it’s really that light. Then, off we went.

On the water I found that, unlike a kayak, I ended up rowing the Flycraft Stealth most of the time. You could quite easily paddle it as well. My first moments at the sticks were clumsy like a newborn fawn, but soon I got the hang of it and was spinning the boat around like a prima ballerina. The Stealth spins on a dime, perfect for casting toward that rising fish that always seems to appear directly behind you.

[ See also: Mental Toughness Is The Key When Fishing Is A Grind ]

Row the Flats or Run Whitewater

An inflatable boat like the Stealth is a great way to fish. Much like a bass boat, the two rotating pedestal seats are very comfortable and are placed at the perfect height for proper posture—but also for spotting fish from far away.

Flycraft engineered a drop stitch floor that inflates to rock solid firmness, so you can stand on it all day long without feeling like you’re balancing on a soft pool toy. The sides are also firm enough that you can sit or stand on them if you need for those extra inches to see a far away school of fish.

The Stealth’s frame is rugged and sturdy like the rest of its construction, ensuring heirloom quality and also providing plenty of mounting points for your rod holders or cameras. The cage that sits on the back of the frame is huge and perfect for securing any gear that you need to access quickly or need to have tightened down for an upcoming section of whitewater.

Give the Flycraft Stealth a Spin

The Flycraft Stealth is rated for Class II whitewater, and I’d be tempted to see what it could do in Class III with experienced paddlers. The Stealth is hands down the only drift boat I would buy if I lived in a river town. Even though I don’t, this is still one of my favorite inflatable boats on the market.

Video Review of the Flycraft Stealth:

Sending out a cast while soloing in the versatile Flycraft USA Stealth. | Feature image: Ben Duchesney/YouTube 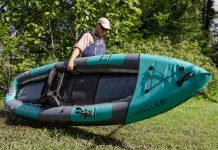 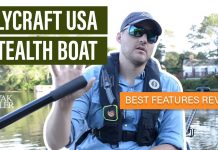