Speckled Trout, from the Gulf Coast to the mid-Atlantic, speckled trout are one of the most popular species for food and sport. While it’s one thing to bail school-sized trout for a fish fry, it’s another thing to chase trophy gators for bragging rights. Ocean Kayak pro Lee Williams combines tactics from all along the trout coast to target speckles in Tidewater, Virginia.

Big trout often lurk deep, waiting for a clueless baitfish to swim overhead. To give the fish what it’s looking for, pros around the country are using suspending twitch baits. These rubber or hard plastic baitfish imitations are designed to sink slowly and swim erratically. “The key is to work the bait slow,” Williams says. Cast out the lure and count as it sinks to the appropriate water depth, then work the lure back by alternating a strong twitch of the rod tip and a hard turn of the reel with a motionless pause. “Count each pause to control how deep the lure sinks between twitches.”

Speckled trout will often hold in the current waiting for the water to bring a meal. The best strategy can be to anchor down current of the fish and bounce or slow-roll a soft plastic jig. Williams uses an anchor trolley system to keep his kayak in place. “I run one trolley to the bow on the left side and one trolley to the stern on the right side,” he explains. This allows him to anchor with either his nose or stern into the current. Williams warns to use caution when anchoring a kayak, especially in current or rough water. “Throw the anchor and clip the line in the carbiner on the anchor trolley then work the line to the bow or stern,” he instructs. When the kayak comes tight on the anchor rope, Williams secures the line with a cam cleat. “I can release the line quickly and it won’t get tangled or cause a snag.” 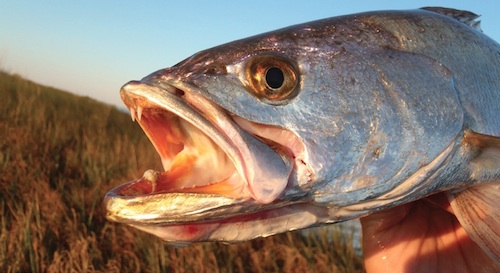 Trout have a soft mouth. Use thin wire hooks that have some spring to forgive the fish’s wild head-shakes. Set a light drag and use a limber rod. “Whatever happens, don’t let any slack in the line,” Williams says.

LiveTarget’s Softbait Shrimp mixed with real shrimp flavor. To produce a realistic movment, the shrimp’s feet move like a shrimp kicking itself through the water. livetarget.com.