Heading down to the pond one evening, I grabbed a baitcasting rod and my seven-year-old son quipped, “Cool. Now maybe you can cast like a real fisherman.” He knows I am far from a casting expert. I can’t even manage the garden hose without it turning into an anaconda choking my thigh. With my prodigy looking on, switching to a baitcasting reel is more than a little intimidating.

A sensible voice would say we’re comparing apples to oranges.

These are two completely different reels, each better suited for specific fishing techniques. A baitcaster launches a heavier lure farther with more accuracy. A spinning reel is better for finesse fishing with light lures. You’ll find both styles in any serious angler’s quiver. Still, there seems to be powerful reel bias.

Why choose a spinning reel?

There is no argument a spinning reel is easier to use. Hold the line with your finger, open the bail, cast the lure and click the bail closed.

In fact, a spinning reel is better at many things. The reel hangs below the rod, using gravity to achieve balance and power. Maintain control by locking your forearm along the long rod butt.

Why choose a baitcasting reel?

With a baitcaster, I change hands between the cast and retrieve. After I set the hook, I fumble to find the little handles. When I’m fighting a big fish, I’m also fighting to keep the reel above the rod. A baitcaster makes me feel like I’m fishing with T-rex arms.

Mess it up and you end up with an epic tangle choking the reel. Call it a backlash, a bird’s nest or an over-run, you’re left picking out the kerfuffle and pulling loose line off the spool.

Even the wind can cause a baitcaster catastrophic failure. With the wind to your back, cast a mile. Wind in your face and you’ll be picking and pulling.

Despite the obvious downfalls, the modern baitcaster is considered the cool reel because it is difficult to cast.

A baitcaster lets me get nasty with my cast.

It is a sleek, sexy, power-fishing machine with gears, knobs and dials. Carefully adjust the casting brake and spool tension to control how fast the line leaves the reel. Pros carry a dozen baitcasting rods each dialed in for a specific lure.

The spinning reel, on the other hand, is perceived as a dainty, light-line, finesse-fishing, whirling egg mixer.

“Can I stir it?” a four-year-old once asked me. I’ve heard pros refer to spinning reels as a fairy wand or sissy stick. Who wants to show up at the tournament with a fairy wand? How can I face my son holding a sissy stick?

[ Read more: How To Cast A Baitcaster Like A Pro Right Away ]

Is this reputation fair? Sure, we’d all love to drive a manual transmission car. Shifting through the gears like a race car driver as the engine whines and growls. Truth is, most of us drive an automatic. For basic transportation, convenience trumps cool.

I admit there is something extremely satisfying about casting a baitcaster.

As my good friend Jared Schleifer explains, “A baitcaster lets me get nasty with my cast.” Winging a baitcaster, spray flying off the spool, lure arcing through the air, landing with perfect accuracy makes me feel like I’m peeling out in a muscle car burning rubber through 100 feet of black smoke. Casting a spinning reel is like driving Ms. Daisy. You might as well fish with your pinky extended.

Anyway, I recently bought another baitcaster. I’m trying to get back in touch with my nasty side. Right now, I’m working on looking cool while picking out another backlash. 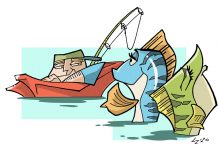 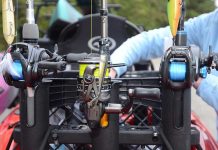 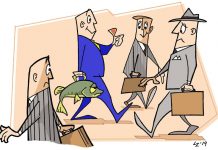 When fishing hurts so good you can’t hide it