The reason I go fishing changes from day to day. Sometimes I fish to practice my craft, other times I fish to learn something new. I fish to be alone and I fish to be with my buddies. Among the reasons I fish, the most exciting is fishing for adventure. Pushing beyond what’s easily accessible can open up some extraordinary fishing possibilities, but the personal benefits don’t stop there.

[ See also: 12 Micro Adventures You Need To Do This Year ]

7 Steps to Seek Out Extraordinary Fishing

Honestly, I’ve gotten in a ton of fishing these past stay-near-home years. As far as I’m concerned, every fish I catch is a good fish, and every day I can fish from my kayak is a good day.

But sticking to my local river became a script. The put-in pool always has a pack of mid-sized smallmouth just off the weedline; the rapid below has the two rocks that produce a hit by stripping a white McFly up the eddyline; the long drift below requires a sinking tip. I’ve got it dialed in. I consider fishing my local river an activity, not an adventure.

The difference between an adventure and an activity is not knowing what the outcome will be. Activities follow a script while adventure is open ended. Adventure is almost always clouded with some doubt and discomfort.

Most definitions of adventure have something to say about seeking risk or exposure to risk. Often interpreted as risking injury, the more accurate reading is risk as uncertainty of outcome.

[ Read more: One Skill Most Kayak Anglers Will Never Learn ]

What do we gain from adventure?

The reasons people seek adventure are as varied as the reasons we fish. There are generations of literature and research on why people seek adventure, much of it inconclusive. Without getting sucked into this deep topic, most thinkers circle back to a human desire to push outward, to learn, or to grow and learn more about ourselves. Adventure is one of the ways to do this.

The past years have totally squashed adventure from my day-to-day life. But I fixed my problem late this summer.

There is a can’t-get-there-from-here spot near me. I live in rural Canada bumped up against thousands of acres of wilderness and famous paddling paradise, Algonquin Park.

I will leave this little river unnamed, but it lies on a remote canoe route and was famous a hundred years ago for beautiful brook trout. The river even had a best selling book written about it in the 1940s.

[ Read more: How To Find Your Own Honey Hole ]

Of the few modern accounts I had heard through the guide-vine, fishing was still pristine because the river is so hard to reach. To get there, die-hard anglers paddle five days with many portages. They do however report the effort is still worth it.

For me, five days is too much time. With a need to explore new water without quitting my job and abandoning my family, I found adventure in seven steps.

Recruit my fly fishing, mountain biking and paddling buddy, Cam. Making it clear to him I’m not sure how this is going to go.

Drive an hour on rough gravel roads that become impassable. Then strap our inflatable packrafts to our fat bikes and pedal for a couple hours.

We don’t have the right valve so we blow the boats up by mouth, which was a bad idea. Then we paddle across a medium-sized lake and into the run out of an unnamed formerly famous river.

4Paddle into the thick of it

Portage our way upstream into the heart of the river. Five hours of high output travel. Find several beautiful brook trout in each pool by swinging wet flies in the narrow, fast current. Lose the landing net somewhere along the way so we land the slippery, frantic fish in my hat, which was another bad idea.

Turn around and reverse all steps, with hopes to get to our truck by dark. My packraft tears on a rock while paddling rapids back downstream. To save time we double up in Cam’s solo raft and boogie back to our bikes. Fail to find the lost landing net.

Deflate the boat with air still in it, ride the bikes, get to the truck a bit darker than is a good idea to be fat biking. Lose the tip of Cam’s rod somewhere along the rattling bike ride. Too dark to look for it.

7 Bask in the sense of accomplishment

So would I do it again? Maybe. But for me returning someday was not the point. The real point was to see if it could be done, to test an idea, to go someplace new after years of being stuck close to home. The effort and the doing of the adventure were valuable, to see how it would turn out. Catching beautiful brook trout just makes for a better story.

Pushing beyond what’s easily accessible can open up some extraordinary fishing possibilities, but the personal benefits don’t stop there. | Feature photo: Jeff Jackson 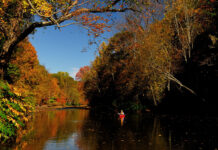 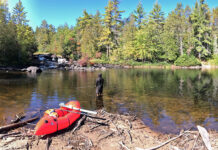 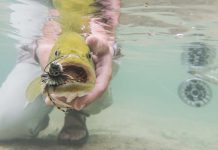 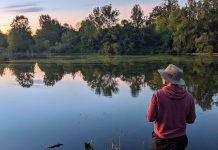 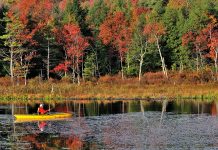