Launching before sunrise, paddling after sunset and fishing all night are becoming more popular for anglers who seek a few extra hours on the water. Fortunately, a variety of LED lights and other kayak lighting options are available for night-fishing diehards and dilettantes alike.

Do Kayaks Need Lights at Night?

The answer is yes, absolutely. Start with safety: According to the U.S. Coast Guard regulations, a vessel under human power is required to exhibit an all-around white light in significant time to prevent a collision. In short, paddle and pedal operators can get away with a flashlight, but that doesn’t mean that they should.

“It is a whole different world at night,” says Ocean Kayak pro Guyton Thorne. “Having the right lights and equipment is as important as knowing the currents and conditions.”

Thorne says, “Most guys use a white navigation light mounted on a pole that stands at least four feet above the water.” He recommends mounting the light in your kayak’s stern, where it will not interfere with fishing or night vision. Shade-tree kayak mechanics can fashion a navigation light out of an ACR C-light and a 48-inch-long piece of half-inch PVC pipe. Fit the lantern into one end of the tube and stick the other end in a rod holder or zip-tie it to the crate.

If the kayak is powered by an electric or gas motor, then follow more strict lighting regulations including navigation and anchor lights.

a vessel under human power is required to exhibit an all-around white light in significant time to prevent a collision.

Kayak Lights Are Fun and Useful, Too

Many anglers have taken their kayak lights and their night-time fishing to another level. In addition to the required safety lights, these tinkerers have added deck and below-deck lighting.

LED striplights are perfect for nocturnal kayak anglers. Hook 1 pro, Michael Guyer, has pimped his Wilderness Systems Ride 135 inside and out with SuperNova lights. Using a super-sticky adhesive, he affixed a narrow ribbon of Supernova LED lights to his bow, stern, inside his cockpit and even inside the hull. “The lights hook into a 12-volt rechargeable battery and draw very little power,” he explains. Guyer also packs a submersible light on a 20-foot cord. “I anchor up, throw the light out 10 feet and let it sink to the bottom, then I wait for the bait and fish to come to me.”

Some kayak fishing lights are meant for more than illuminating the night. Wild Cat Lighting offers Bug Lights, which mount inside the kayak and emit an amber light that repels biting insects and keeps them from interrupting a fishing trip.

Meet the Wizard of Kayak Lighting

Custom kayak designer Romel Labrador is called “The Wizard” for his ability to add lights and accessories to a stock kayak. “LED lighting technology in the public safety industry is very big right now,” says Labrador. At his day job, Labrador designs and installs lighting and equipment on police cars and ambulances, making him an expert in the latest technology.

When applying lights to a kayak for night fishing, Labrador cites several criteria. “I think about the LED’s level of brightness and intensity, quality of the optics, heat output, the effect on operator’s night vision and the angle of the light’s illumination.”

In his home workshop, Labrador adds a word of caution about LED lighting for kayaks: “Currently lights are rather expensive for what they are. You’re paying mostly for how the light mounts on the kayak.” Labrador says most LEDs are made by the same manufacturer, “execution is what you pay for.”

Long time kayak lighting specialist at Yak Lights, Gunther Vinson sees lighting trends driven by “kayak anglers looking for wireless control and bigger lighting kits.” He says many want more sophisticated connections, spotlights and navigation lights that can be controlled independently with separate illumination for boat interiors and other sophisticated connections. With all the possibilities, Vinson reminds us, “Battery capacity is critical.”

At Guardian Angel, a leading LED lighting manufacturer, owner Chad Keller says battery power is a function of time, “It’s always a balancing act. We can dial up power with less run time and optimal output of light.”

Keller and the other experts agree lithium-ion batteries continue to evolve. Kayak lighting is taking advantage of the evolution of output options. “We remain innovative by being keen on other industries, we even look at Tesla.” The luxury electric car company has spawned many innovations in power that trickle down to the kayak lighting market.

What the Future Holds for Kayak Lighting

So, what might we expect in kayak lighting in the near future? Our experts look into the crystal ball.

Gunther Vinson expects to see lights installed at the factory by the original equipment manufacturer. “Just like any other vehicle, a kayak will have to have lights on it.” He envisions changes in regulations requiring more visible kayak lights for night fishing. “There will be some sort of registration system, probably from the Coast Guard,” he says.

Chad Keller at Guardian Angel looks forward to using the best technology available. “More people are looking at performance, not price. We are continually looking at other lighting companies to see what they are doing.”

The rigging wizard, Romel Labrador says “tourney contestants want to add every advantage to get an edge. Our kayaks have become mini bass boats.” He expects anglers using motors will lead to changes in the regulations to address the new classification.

“Less is more”, says Labrador. “Some people realize adding too many lights is overkill. There’s a full range of kayak light users, some just want to be seen, others are looking for a glitzy display on a fully loaded tournament fishing machine.” Whatever lighting systems kayak anglers can dream up, these experts say the sky is the limit.

And it don’t matter if we sit forever. And the fish don’t bite…. You and me go fishin’ in the dark. – Nitty Gritty Dirt Band | Feature photo: Scott Beutjer 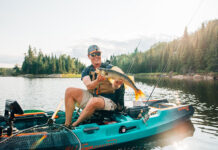 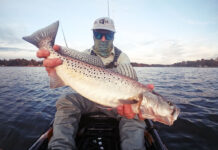