Have you ever fished the flats in your kayak and wished you were on a standup paddleboard?

Or, paddled your SUP a few miles and wished you’d brought the kayak? Do you wish you owned a small skiff?

Evidently, a lot of anglers share your wishes, spawning a new class of paddlecraft called the microskiff.

What Does Kaku’s Voodoo Fishing Kayak, SUP and Skiff Have To Offer?

The love child of a standup paddleboard, kayak and a small, flat-bottom motorboat, hybrids can be paddled standup, sit down or rigged with a lightweight motor to take the work out of fishing.

Last year, BOTE set the microskiff mark with the Rover, a 14-foot fiberglass SUP rigged with a six-horsepower outboard motor. Then, we saw the FishSUP 126 from Sea Eagle, an inflatable paddleboard outfitted with a 12 volt battery and trolling motor.

This year, Kaku Kayaks and SUPs enters the race with the Voodoo, a rotomolded plastic mixed breed which can be outfitted with its own 12-volt battery and electric motor.

Kaku owner, and Voodoo conjurer, Kevin Hawkins calls the board-slash-boat an “authentic fishing paddlecraft.” When we asked him what this means, he explained: “It’s an unique design from the kayak hull and chair to the standup paddleboard deck.” Even though the Voodoo has the flat deck of a SUP, it also retains a keeled hull of a kayak.

“First and foremost, it is a paddlecraft,” Hawkins stresses, but he admits the Voodoo exhibits some microskiff qualities, too. “The mounting options allow Voodoo to take a trolling motor or Torqeedo,” he says.

The Voodoo’s big advantage is offering the convenience of a kayak and stability of a SUP in a tough, rotomolded plastic skin.

By their nature, shallow water boats take a beating. Grinding over oyster bars, bouncing into dock pilings and rolling through rock gardens is all in a day’s work. Rotomolded plastic is tough enough to take the abuse. Better yet, it’s easier to weld than fiberglass is to patch.

The Voodoo is shaped like an expedition SUP with a pointed nose to cut through the water and a wide tail to add stability and capacity. The broad stern—Hawkins calls it a “fat rear end”—provides more room and volume to load the board with cooler, tackle and gear.

Five StarBoard mounting plates on the tail make it possible to add an electric motor and multiple Power-Pole Micro anchors.

On the underside, the Voodoo’s flared bow, keel and channels work to keep the board paddling straight whether I was standing or seated. I didn’t fight to push the nose into the wind and current. While the hull is flatter than most kayaks, it is deeper than a traditional SUP. More material hanging in the water improves tracking and stability, but it cuts down on acceleration and top speed.

The Voodoo weighs 77 pounds, less than many kayaks, but more than most standup paddleboards.

It would be tough to throw the Voodoo under your arm like a traditional SUP and head down to the beach. And so Hawkins built handles on the rails, bow and tail making it easier to load and wheel on a cart.

I splashed the Voodoo at my favorite tidal creek where sight fishing is the name of the game. Paddling through the marsh, hitting docks with a jig or casting twitch baits over a depth change, the shallow draft made the big board easier to maneuver than a kayak. The sides of the Voodoo are lower to the water than a kayak, so it doesn’t get blown around as much.

When I’m fishing the flats, I like to take both a SUP paddle and a kayak paddle so I can switch from standup paddling to sitting down. The Voodoo paddler sits almost two feet above the water, so I needed a 245-millimeter-long kayak paddle and full-size, high-angle blades to push the board. An adjustable SUP paddle made it possible to reach around the 35-inch wide rails.

Of course, the trade-off is a heavier craft cutting through the water like a kayak instead of gliding over it like a SUP.

Hawkins calls it a Deck Yak, “It’s really a kayak with a flat deck.” He stresses the Voodoo’s capacity to paddle well. I think it’s more a SUP with a deeper hull. Either way, the Voodoo’s rock-solid stability and acres of deck space outweigh its high-performance qualities.

Sitting in the seat and paddling with a kayak paddle the board vibrated with every wind chop wave and water gurgled up through the scuppers. Still, when I paddled from fishing hole to fishing hole, it was nice to sit in the seat and take advantage of the efficient double-bladed paddle.

The star of the show is the Voodoo seat. Beefy aluminum tubing and a wide seat bottom allows the seat to double as a standing platform. Yes, I stood right up on the seat. The seat back is padded to make a convenient leaning post. Mounted on tracks, the seat can be moved fore and aft making it possible to compensate for a heavy load in the fat rear end.

Unfortunately, I didn’t get to test the Voodoo as a microskiff, but I can tell you it has enough float to handle the load. The Voodoo boasts 450 pounds of capacity, so there’s plenty of room for gear, battery, motors and more.

The deck features gear tracks to mount accessories. Another advantage of a plastic SUP is rod holders can be attached anywhere with rivets or self-tapping screws. Close-cell foam padding on the deck is easy on the feet. I like the dark colors to cut down on sun glare and improve sight fishing. As a nod to its kayak roots, the Voodoo has a large bow hatch and a small day hatch in the stern.

The deal breaker for most hybrids is they don’t adequately perform either intended task. A SUP, skiff, kayak mash-up isn’t worth its weight in plastic unless it’s easy to paddle, fish and motor. The Kaku Voodoo paddles well enough as a kayak with all the stability of a SUP. I don’t really know what Hawkins means by authentic fishing paddlecraft. As far as I’m concerned, his Voodoo doesn’t conform to anything. Instead it takes essential features from kayaks, SUPS and skiffs and smashes them together into a category all its own. 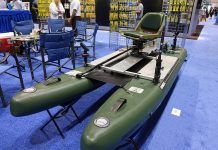 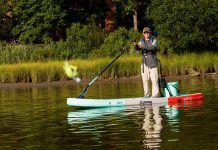 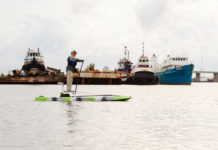 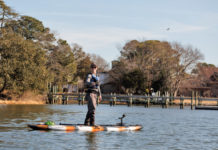 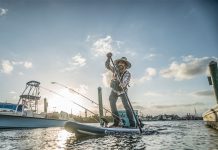