A fresh take on the popular and value minded design

The Hobie Passports have proven to be a popular set of kayaks in recent years. These kayaks have taken some of the best design elements of Hobie’s flagship models, combined with the technology of the MirageDrive pedal system, and managed to produce a fishing kayak at an accessible price point. The Passport R Series, available in the 10.5R and 12R, takes the entire design of the original Passports and places them on a rotomolded plastic hull.

A large part of what made the Passport available at an accessible price was a thermoformed plastic construction. The thermoformed construction provided the lightest hull in the Hobie lineup at a weight of 73 pounds, and with the thermoform process the lowest cost of manufacturing. This gave kayak anglers, especially those new to the sport, a low cost option in the sport built by one of kayak fishing’s legacy manufacturers. After all, Hobie was the first to offer pedal-drive fishing kayaks—propelling the sport in the direction we see today.

The original Passport is also the first Hobie kayak to be built outside the US, in France. With the onset of circumstances most manufacturers have faced since 2020 Hobie has not been excluded, and has pushed the brand to reimagine the value option.

The R Series is the answer, allowing Hobie the ability to continue offering the value design of the Passport. They achieve this first by producing the Passport R Series in the US, using the same construction process as the majority of Hobie fishing kayaks. And second, by creating a lightweight rotomolded kayak nearly identical to the hull weight of the thermoformed Passport. 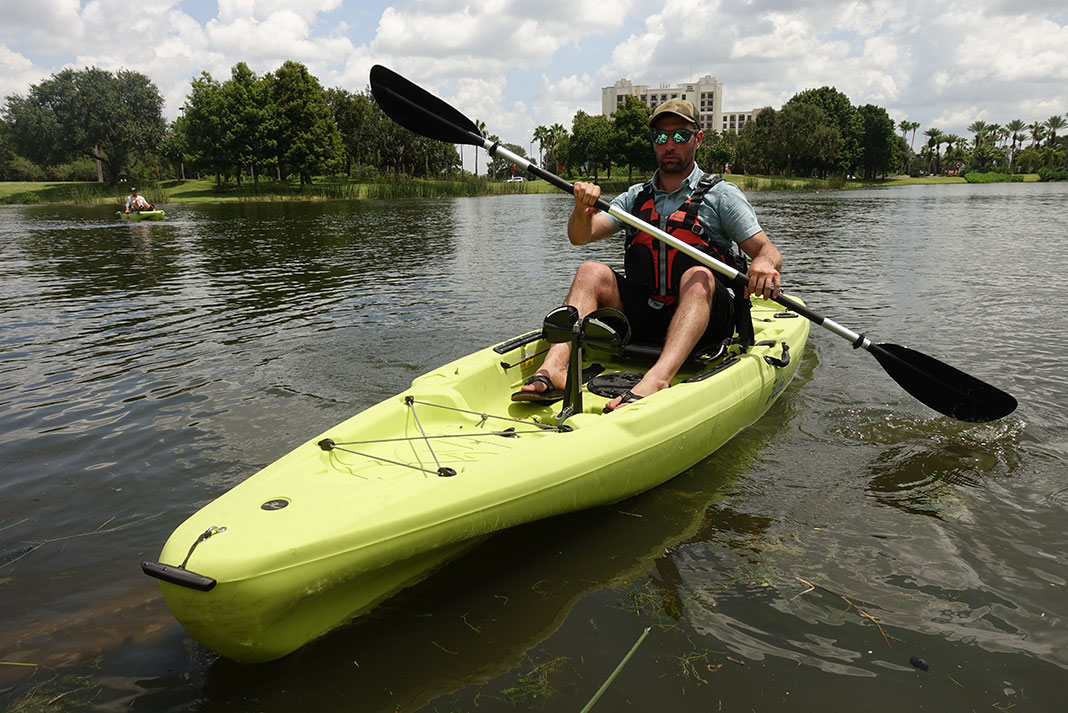 The Passport 10.5R and 12R are built on a stable, pontoon-like hull. The 10.5R measures at 10.5 feet long and 34 inches wide. While the 12R also maintains its namesake at 12 feet long and 34 inches wide. Another aspect of what has made the Passport hull shape popular are these kayaks’ ability to stack on one another well, adding to their value for those seeking to use them for solo fishing endeavors or a recreational outing.

For the deck rigging and features the Hobie Passport R Series carries over the simple, yet thoughtful elements which make for what may first appear to be a recreational kayak but tuned up for the purposes of an angler. The deck has a recessed molded area in the bow perfect for stowing a drybag, and secured with bungee cords. The center holds an 8-inch hatch to access the hull. And a recessed area in the stern is capable of holding a crate while flanked by rod holders to each side.

The Hobie Passport R Series kayaks both have a suspended, folding, mesh seat. They also have a stowable rudder system operated by a single cable, and the ability to mount a Power-Pole to the stern.

What has always made Hobie stand out in the kayak fishing realm are their MirageDrive pedal systems, and the R Series kayaks are no exception. Both the 10.5R and 12R come equipped with Hobie’s MirageDrive GT. The GT, which stands for glide technology, is built with roller bearings to reduce friction and intended to decrease resistance with each kick, for a more efficient pedaling experience. The MirageDrive GT also comes equipped with Hobie’s Kick-Up Fins to prevent smashing your flappy propellers on logs, rocks, and other debris.

How To Flip A Kayak Back Over With Jeff Little (Video)