Pro photographer Scott Beutjer covers the kayak tournament scene with his pen and lens. Chickamauga Lake is one of his favorite stops on the tour. For local intel on the world-famous destination, Beutjer enlisted writer and tournament regular Michael Cheatham.

The Tennessee River begins near Knoxville and ends in the Ohio River. Along the U-shaped path, a series of dams create world-famous bass fishing lakes. One of the most famous, Chickamauga Lake, hosts diverse fishing opportunities where anglers can fish their favorite technique from creeks to deep water, roadbeds, lily pads, rip rap, even bluff walls.

Accessing the cornucopia is easy, the lake is dotted with launch locations. The abundance of fishing options attracts some of the biggest tournaments.

Dayton Boat Dock and Grill is a one-stop shop for local lures and good advice.

Chester Frost Park has plenty of campsites and a boat launch with quick access to the best fishing on the lake. A well-known producer of trophy bass, Harrison Bay State Park is across the lake from Chester Frost. Well-kept and convenient, the campground has also put up winning largemouth. Campers be warned, lock up your food, the local racoon posse is relentless. Dayton and Chattanooga host affordable hotels; make reservations well in advance of big tournament dates.

Dayton Boat Dock, that’s right, the tackle shop has a café. Get a bite for yourself and something for the fish to bite. Don’t miss the best shrimp and grits at Café on the Corner on Lookout Mountain. In Chattanooga, Tremont Tavern is home to the best hamburger. Monkey Town Brewing Company, in Dayton, offers adventurous food and beverages.

In 2000, the Tennessee Wildlife Resources Agency started a program stocking lakes with Florida largemouth. The initiative has paid off in a big way.

The average largemouth is four pounds and double-digit fish are on the rise. The state record largemouth, 15 pounds and three ounces, came from Chick in 2015. So did the state record spotted bass and the lake holds a healthy population of smallmouth.

Giant bass are available year-round, but the best shot at a personal best is early spring when the fish are shallow.

[ Also read: How To Fish A Chatterbait ]

Cast a white and chartreuse buzzbait or a white Chatterbait and paddle-tail trailer around wood and docks. For smallmouth, fish a six-foot, six-inch St. Croix Mojo Bass spinning rod and 10-pound test monofilament with a four-inch black and blue-flake Senko.

Chickamauga Lake has acres of water to cover. A pedal kayak is the best way to beat traffic. Big boats, like the Hobie PA14, have the advantage when fishing open water. A Humminbird Helix 9 G3N with sidescan sonar will pinpoint bass to narrow the search.

Chickamauga’s fishery is so healthy, bass seem to live everywhere. Fishing the deeper Harrison Bay is productive for big bass, but watch out for heavy boat traffic. Richland and Mud Creek are grass-filled bass jungles. Sale Creek has easy access to both shallow upper waters and open water near the creek mouth. Smallmouth fishing is excellent against the Chickamauga Dam or travel to the tail waters at Watts Bar Dam.

10 Top Kayak Designers On What Makes Them Tick 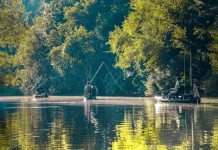 3 experts on redfish, speckled trout and striped bass in the winter