Everyone knows drop shots and small jigs are standard operating procedure for bass. Problem is, the bass know about finesse fishing, too. Give old mossback something he hasn’t seen before by combining old school tackle with new school techniques. Here are four proven finesse rigs to use while kayak fishing for bass.

What’s swimming over the weeds? Is it a fish? Is it a crawdad? No, it’s a small swim jig with a wiggly tail trailer. A 3/16-ounce or 1/4-ounce Strike King Bitsy Bug pairs perfectly with a Zoom Super Chunk Jr. trailer to mimic a bluegill, shad or crayfish. The skirt gives the body depth and action like a thick-bodied bait. Swim the combo close to cover. Let it drop on break lines. Watch your line for a grab on the way down. Or, let the lure settle to the bottom and drag or scoot it in rocks and wood where bass hunt crabs.

A good old Zoom Centipede dragged behind a heavy Carolina rig sinker has caught bass for years, but there’s more than one way to rig a centipede. Try threading it flat on an exposed 1/0 Matzuo Sickle Hook with a 1/16- to 1/8-ounce sinker to keep the big bait near the bottom. The lure works great casting into a quartering current in rocky areas where it rarely hangs up. Use 20-pound fluorocarbon on a baitcasting combo for the power to pull the centipede out of the rocks and snags.

In still water, the centipede is equally deadly dragged along the bottom. The big, juicy worm looks like dinner to bass. They often nail it when they’re not even in the mood to feed.

The split shot worm is a California classic for heavily pressured fish. Picture a downsized Carolina rig. The traditional rig uses a split shot 12 inches above a rubber worm. Instead of pinching the thin line with the split shot, peg a bullet-shaped sinker to the line. Tungsten weights offer more heft with less bulk to easily slide through the grass. Also, tungsten sinkers are harder and more sensitive than lead, providing a better feel of the bottom structure. A classic rubber worm works great or change up to a fluke, minnow or crawdad to match the local bait.

Use a spinning combo and light line to cast the split shot worm. Or horse the jig out of cover with a baitcasting setup and 15-pound-test fluorocarbon.

Take a cue from anglers fishing heavily pressured bass in Japan. They don’t worry about using small hooks to catch some of the world’s biggest bass. Two favorites are 1/32-ounce head and No. 6 hook or 1/16-ounce head with a No. 4 hook. A good compromise is Z-Man’s 1/15-ounce NedlockZ mushroom head, which has a heavy-duty No. 2 hook. Elephants eat peanuts, and a four-inch Z-Man Finesse WormZ shortened to 3.5 inches matches a small minnow’s slim profile.

Put out good vibrations by swimming the lure—slowly, reel while twitching the rod tip. 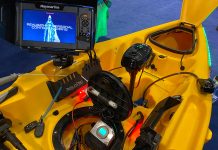 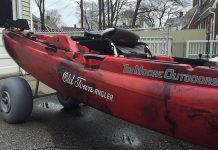 How To Easily Build Your Own Kayak Beach Cart

Does Your Fishing Kayak Need A Rudder Or Not? 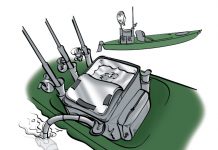 6 Steps To Add A Livewell To Your Fishing Kayak 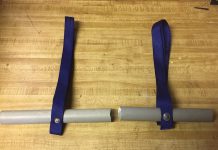