Moving deeper into this new year, many of us have high hopes of achieving personal angling goals. It might be winning a tournament , becoming more effective with a certain type of lure or just catching a bigger fish than your annoying fishing buddy! I’ve realized through speaking with kayak anglers at my seminars that many have the proper motivation to accomplish their angling goals but often fall short of reaching them. In most cases, anglers falter because they make goals that are too big, to numerous or not specific enough.

As luck would have it, there is already a pretty darn good system for setting and evaluating goals that is widely used in all types of organizations. A fella by the name of George T Doran is credited with developing the SMART strategy for setting goals. I’m not sure if he was a kayak angler but he probably never imagined his work would eventually show up on a kayak fishing blog! The acronym stands for Specific, Measurable, Attainable, Relevant and Time Bound. To avoid a long winded explanation of each of these terms, I’ll just walk you through one of the goals I set for 2016.

My goal – “To catch at least one river smallmouth bass using a fly rod from my kayak in each of the winter months here in the northeastern United States. This includes November, December, January, February, and March.”

Let’s see how this measures up with the SMART approach…

Is The Goal SPECIFIC?

The goal as stated above is very specific. It’s probably better to give you a non-specific example to compare. I could have set the goal “Become a better winter kayak fly angler.” It’s not very specific in nature so it makes it difficult to measure and determine if the goal has been reached. Always make sure your angling goals are specific.

Is The Goal MEASUREABLE?

The goal is definitely measurable. It states a quantifiable objective which is “one river smallmouth each month”.  If I wanted to become a better crankbait angler I might set my goal as “catch more bass with a crankbait this year” That’s a good goal and might be measurable if  I kept details of every catch from year to year in my fishing log.

An even better way to set that goal to make it easier to track and measure would be to say something like “I want to catch at least 2 bass per outing on a crankbait” this would force me to stick with it and fish a crankbait in a variety of conditions not just when the crankbait bite is on fire. Let’s face it, when the bite is on fire, anybody can sling a crankbait and catch fish. The goal is to become a better crankbait angler so set the bar a little higher. 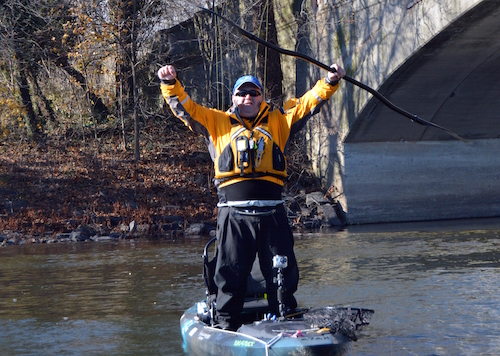 Is The Goal ATTAINABLE?

This is sometimes the toughest part of setting goals. You want to have a goal that is attainable for you but at the same time you want the goal to challenge you to move to another level in your fishing skills.

The goal that I set for myself is attainable in my estimation. I’ve consistently caught river smallmouth from my kayak in the winter months for almost a decade. I know catching bass with conventional gear is attainable but I’m not sure I can replicate that success with my fly fishing gear. It’s definitely going to be a challenge.

Is The Goal RELEVANT?

I’ll just say this. If it’s a fishing goal, then it’s relevant in my book!

Is The Goal Bound By TIME?

When do you want to achieve your goal? Goals that are open ended in terms of time frame tend to get pushed off until they are forgotten. Make sure you set a definite time frame or deadline in which your goal needs to be accomplished!

Using my fly fishing goal as an example, it’s easy to see that it is time bound. The goal runs through to March which is officially the last month of winter. It’s got a definite start time and a definite end time. It’s going to be hard to have an excuse for not giving it my best!

Setting a good goal is just a start. It’s also critical to think about what behaviors are necessary to accomplish your specific goal. It could be time on the water, reading articles, attending seminars, investing in new gear, taking a kayak fishing class etc. My point is that having a list of concrete actions steps will propel you toward your goal and your endeavours to become a better kayak angler!

10 Expert Rigging Skills To Level Up Your Game

15 Expert Fishing Skills To Level Up Your Game