My first time trying to fish a whitewater area by kayak ended badly. I lost a pair of glasses, a camera, some tackle and probably 10 degrees of body temperature. The mistake that flung me into the 55-degree Potomac River water is one that has played out many times with new kayak anglers: I broached my kayak on a rock.

What is a Rock Broach and How to Avoid It?

The term “rock broach” refers to a situation when the current slams your kayak sideways into a stationary object like a rock or log.

The jittery newbie startles from the thud of the rock against the hull. He scrambles to paddle quickly off the rock while leaning upstream, away from the rock. The water piles up on the upstream side of the kayak and eventually torques the kayak and its contents into the heavy upstream current.

Nine years of teaching kayak fishing for river smallmouth has brought me to understand that dealing with a rock broach is one of the first river skills that a kayak angler must learn. Without the sense of security that this skill brings, the roar of rapids downstream distracts anglers from concentrating on their current cast. They stop fishing well before the end of the pool, where most of the big bronzeback stack up in push water.

To overcome the natural urge to lean away from the rock, try this drill. Practice drifting into a rock in a current that is steady but not strong. Position your kayak sideways, upstream of the rock, and start drifting downstream. Keep your head turned completely away from the impending collision. To overcome your desire to see the rock coming, choose an upstream object to focus on. If you drift too far to the side, blindly paddle forward or backward so the collision will occur at your hip. When you collide with the rock, lean into the rock. Then repeat the drill on rocks in increasingly stronger current.

This is a drill I do with my students when I’m teaching. If you don’t have an instructor with you to help practice this, make sure you have a buddy who can help you out if you run into trouble.

First, the crash gets the angler used to hitting things with the kayak, avoiding a freezing up reaction.

Second, it develops the reflex to lean into an object. The same nerve impulses in our spinal cord and brain stem that help us pull away quickly when our hand feels a flame come into play here. With repetition of a cued response, our reflex to lean into what we originally saw as a threat comes naturally. If we only understand the concept without practicing the correct lean, the reflex is not there for us when we need it most.

[ Read more: How To Launch And Land Your Fishing Kayak In Surf ]

Once you practice this skill and use it a few times in whitewater, you’ll find you spend less time worrying about what’s downstream and more time with your line in the water. 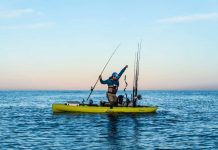