Whether you’re fishing for personal challenge, tournament glory or tonight’s dinner, catching a redfish, sea trout and summer flounder is celebrated as an inshore slam. Catching one of the three is tough enough, but picking the right tackle and tactics to fool a bottom feeding flounder and ambush hunting trout and marauding redfish in one day takes planning, preparation and a lot of luck. We asked three inshore pros for their top tactics to complete this trifecta during the dog days of summer.

How to Catch an Inshore Slam

A full-time guide at Tails and Scales Guide Service on the Gulf Coast of Texas, Esley knows when nothing else works, he can entice reds with a Strike Pro Hunchback wakebait. Wakebaits hit the water with a splash, their exaggerated back-and-forth swimming pattern leaves a telltale Z-trail on the surface. The small lip on the Hunchback allows it to swim just below the surface while wiggling seductively from side to side.

First, Esley finds shallow areas with shell bottoms. “Just about any other lure will get hung up in these spots,” he says. He makes long casts using a medium-fast rod with a stiff backbone to offset the drag the heavy, erratic lure produces.

Eric Henson is a guide and tournament angler on the Johnson pro staff. He fishing for gator trout in the skinny water around Sarasota, Florida. “You’ll catch keeper trout on grass in four to seven feet of water,” he says, “but if you want to catch a gator look in the shallow, mottled bottom early and late in the day.”

Suspending twitch baits, 1/16-ounce jigs and walk-the-dog style topwater are Henson’s favorites. For flies, he likes a Riverbum Cockroach. “These three lures cover the water column,” he explains. The real trick is reading the trout’s mood. Henson starts with a slow retrieve and then speeds up to find the fish’s favorite. “I love seeing the orange mouth when a big trout breaks the water.”

A Wilderness Systems pro from South Carolina, Desrosiers’ bread and butter lure for doormat flounder is a Rapala X-Rap Model 6 in black and orange. The versatile bait can be fished multiple ways, including Desrosiers’ favorite, the jerk and pause method. He locates creek mouths with small, sandy islands. “Flounder love to lurk in the sand and ambush unsuspecting prey,” he shares, “they explode upward at the suspended bait like a freight train.”

[ Read more: How To Catch A Three-Fish Trophy Grand Slam ]

Lurking flounder make up one third of the trifecta known as an inshore slam. | Feature photo: Rob Choi 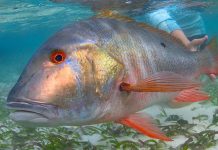 Rule The Reef: How To Catch Mutton Snapper 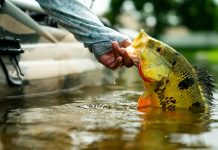 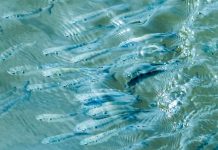 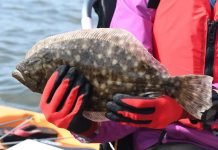 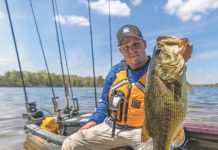 The Summer of Bass