Put two Siamese fighting fish in a bowl and you get a fight. Put two anglers on a lake and you get a tournament. For 2016, there are more kayak fishing tournaments than ever, and a great way to find one near you is through the Kayak Angler Tournament Network (KATN).

Kayak Angler Tournament Network is an online resource for paddle-anglers to find paddle-fishing events. There’s a calendar with locations, tar- get species and other info. KATN events are supported by Kayak Angler magazine with coverage, publicity and prizes. Participants get a free digital subscription to Kayak Angler and tournaments get a media partner with listings online and in the magazine.

There is plenty of news at KATN. River Bassin’ Trail has a new slogan for 2016, “No egos, just fun!” While the tournament still hosts the best river anglers and hottest fishing locations, this year they will add more fun at tournament headquarters with games, demos, food and music. “We want to create a festival feel,” tournament director Drew Gregory explains.This year, River Bassin’ is splitting the tournament into four regions. The champions from each region will meet up to battle for River Basser of the Year. There will even be a season-long, online tournament. Gregory and his canine co- host, Lu, will add a RuffWear award for the angler who fishes with man’s best friend.

Down in Florida, Captain Pat Horrigan’s Kayak Fishing ClassicS is one of the first tournaments to join KATN. This year, Horrigan is adding a television show to the Kayak Fishing ClassicS coverage. “The show will be called Southern Kayak Fishing Report with fishing reports, gear reviews and more stories,” Horrigan explains. KFC has even expanded into Texas. “We’ll have divisions each hosting three events and qualifying anglers will be invited to the Invitational National Championship Classic.

In it’s first year, Great Plains Kayak Fishing Series is taking tournaments in a different direction. The series will feature five tournaments, each with a distinct theme. Tournament director Donald Stubbings counts off the events. “One tournament will give anglers 24 hours to catch a limit of fish.” A kid’s tournament awards big prizes to little anglers. Then, Kayakapalooza will take over Lake Wanahoo a 600-acre impoundment. “The whole lake is no-wake zone,” Stubbings says. Another event will pair a kayak angler with a returned veteran. The last tournament of the series targets the biggest catfish. “Anglers like variety,” Stubbings says, “and GPKFS gives it to them.” 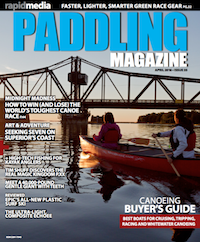 This article first appeared in the April issue of Paddling Magazine. To read the entire issue, click here.