I film from a kayak for a living and I still have to convince myself to put on an action camera chest mount or head strap mount. Usually I end up convincing myself I don’t need the footage badly enough (even though I really do) to look like a weirdo wearing an uncomfortable chest strap over my PFD (what I commonly refer to as the action camera bra) or giving myself a migraine with an even more uncomfortable head strap. When I first heard about the ActionHat, $39.99, the genius creation from Rex DeGuzman, I was convinced right away. This is the answer to so many anglers’ frustrations with capturing POV footage on and off the water. Stop missing chances to shoot POV footage; POV shots are awesome.

(Full Disclosure: DeGuzman and I are going on a trip in the next few weeks, he’s a friend. His product still rocks though).

The Actionhat looks like a regular hat, only it features five mounting locations (the hat can be worn forwards or backwards) for action cameras or smartphones and can be thrown onto your head with one hand as you fish. Try doing that with a headstrap. Before you start worrying about getting on the water and dropping your favorite new hat and expensive camera into the water, the ActionHat floats. It will support the weight of one GoPro and can likely support more, but test out your setup before you go jumping off your kayak with five cameras on your head.

Watch the ActionHat filming on the water with Rex DeGuzman.

There are many colors available, from high-vis options, to camo, to everyone’s favorite color, black, as well as both flat brim and curved brim options. Creator DeGuzman has told us he has even more renditions of the ActionHat coming in the future, so stay tuned for more great products for filming POV footage.

Be sure to follow along with my upcoming canoe trip with DeGuzman, as well as Yak Gear’s Mark Vlaskamp and YakFish TV’s Robert Field. We’ll be testing out the ActionHat, and a few new prototypes, while paddling 100 miles of river in New York’s Adirondacks region. That’s going to be a good one.

For more information on the ActionHat, or Rex DeGuzman, check out LiveLiveGear.com. 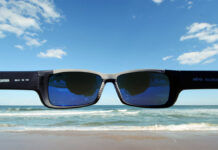 Made In The Shade: 6 Top Fishing Sunglasses 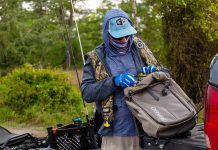