Kraatz came through. The longtime Extreme Kayak Fishing competitor finally put it all together and came up with the big win. In the prestigious and exotic Battle in the Bahamas no less. “Years ago in 2011, a guy came up to me. He reminded me of the guy from Everybody Loves Raymond. I took him out a couple times. He caught nothing,” recalled EKF owner Joe Hector.

Floridian Kraatz – fewer people know him by his first name Joe – brought an aggregate weight of 72.9 pounds to the scale. His kicker was a heck of a kingfish at 30.4 pounds. He rounded out his tally with a 17.2-pound yellowfin grouper, a 7.7-pound mahi mahi, and the exclamation point, a 17.6-pound wahoo. The win earned him a fat $10,000 check. 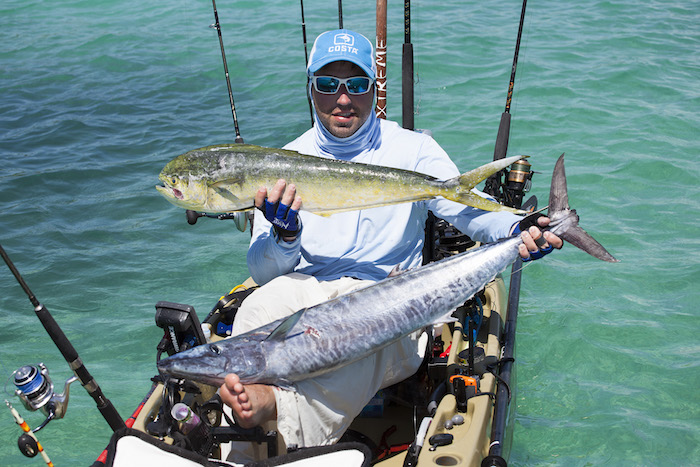 Photo: The waters of the Bahamas are filled with some really big fish.

“I finished second twice, third, fourth, and sixth. Last year I was in first after day one, and got my hopes up. I lost one tournament by one-tenth of a pound,” he told Kayak Angler. “Kraatz got better and better. He came close but never won an Extreme event. Until now,” Hector added.

The Battle in the Bahamas is unique in the world. 50 anglers pile aboard the Balearia Caribbean ferry out of Port Everglades with their kayaks and mountains of tackle. Four hours and a short bus ride later they arrive in Port Lucaya, on the nicer side of Grand Bahama. The water is warm and electric blue, and the species on offer are diverse, everything tropical with a huge helping of impressive bottomfish – if the anglers can pry them from the stony bottom. 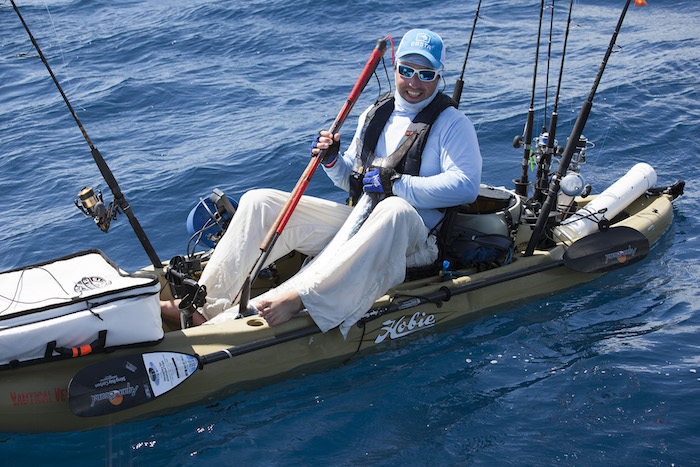 Photo: The EKFT Battle In The Bahamas winner was on the fish all tournament long.

Nick Weber – he usually fishes Lake Michigan – managed the feat in impressive style. His 39.1-pound grouper was the biggest ever in EKF competition. It bit an unconventional rig, a live goggle eye pinned onto a jig. That one fish was good enough for an overall fourth place finish and $1,500. Canadian Brian Arnold was fishing his first EKF tournament. The northerner’s debut was a record setter. He roped a series best 40.2-pound kingfish on day one of the two-day event. His single fish was good for third place and $2,000.

Floridian Brandon Nodal rounded off the podium. His 54.8-pound tally earned him second place and a Hobie Mirage Outback Limited Edition worth $3,400 from Nautical Ventures. Hector was impressed. Many of the competitors were up overnight each day to fish for bait – the critical edge. “The anglers make this event. They killed it,” Hector said. 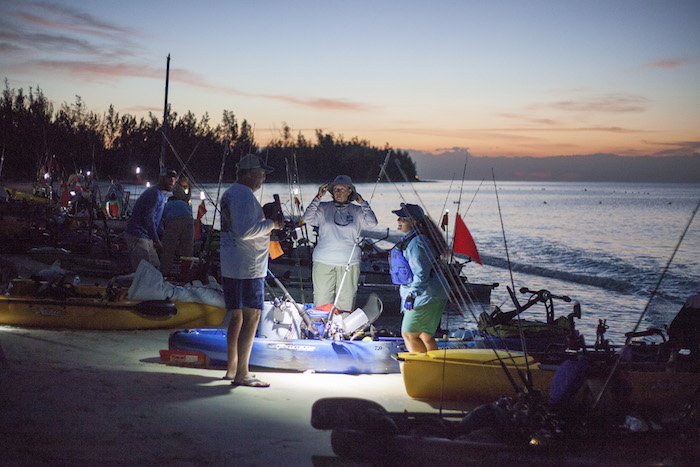 Photo: To win the Extreme Kayak Fishing Tournament Battle In The Bahamas. you have to get up really early and be ready to fish.

For more information about Extreme Kayak Fishing, or their Battle In The Bahamas, check out their website, ExtremeKayakFishingTournament.org.