New technology allows tournament anglers to send scores and photos to tournament directors. This speeds up the scoring and allows fans to follow the action from home. Check out these tournaments using iAngler and other live scoring apps.

Kayak Angler: What was your initial opinion of live tournament scoring (before you used it)?

Eric Henson: I had been using my waterproof camera for tournaments for years. The thought of using my phone on the water made me a little nervous.

KA: What were your concerns?

EH: My phone getting wet and not being able to see the screen of my phone in the sun. Also, cell service in some of the remote fishing areas and I was worried about how long the fish would be out of the water during the whole process.

EH: I like that there’s less room for cheaters and it’s easier to tally up my fish. It really makes the weigh in process go faster.

KA: What are your experiences with the technology?

EH: There was definitely a learning curve, but over all the experience has been good.

EH: Aside from speeding up the weigh in process I also like that you can watch the scoreboard and see where you stand.

EH: Once, a tournament director had to remove the pracice tournament stats from the iAngler app because anglers kept posting fish to the wrong event, and up onto the practice event. Some tournaments the scores have all messed up during the awards because fish were being posted in two different tournaments.

Other times it can be hard to see your phone screen in the sun and if your fingers are wet it can be tough to get the pic. The poor fish is like please put me back in the water!

KA: What have you learned about best practices for using the technology?

EH: Make sure that your fish is submitted in the right tournament. It can be tricky and anglers often enter their fish into the wrong tournament by mistake. Check your email to make sure that the photo of your fish has been approved. That way you can be sure that you get credit for all of your inches.

KA: Could you offer some tips and suggestions for getting the most out of the system?

EH: There is a feature where you can have the system log the locations that all of your catches came from. That becomes a great record that you can go back and use to see where and when you caught your best fish for future tournaments.

KA: What is your protocol when you catch a qualifying fish that you will enter with the system. Walk us through the step you take when you enter a fish.

EH: Keep the fish on Fish Grips in the water until you are completely ready to take picture. Place fish on the board and snap a few pics, making sure the whole entire fish is in the pic along with the start of the measuring board. Revive and release the fish.

Pull the app up on your phone. Log into your tournament, then click on “log catch.”  Load the best pic from the photo library along with length and species. Submit the pic. Check email for confirmation approval.

KA: What suggestions would you make for improvement?

EH: In the approval process, if a fish was declined, it would be nice if they would explain why it was not approved so that you can fix the problem. Also, make sure the practice tourney is taken down before the actual tournament begins to avoid problems with accidental entries into the wrong tournament.

KA: What advice do you offer tournament anglers?

EH: DEFINITELY try entering a fish into the practice tournament to ensure success. There is a definite learning curve.

KA: Any advice for tournament directors?

EH: Do a Q&A with your anglers at the captains meeting to make sure everyone is on the same page. It will save a lot of headache in the long run. 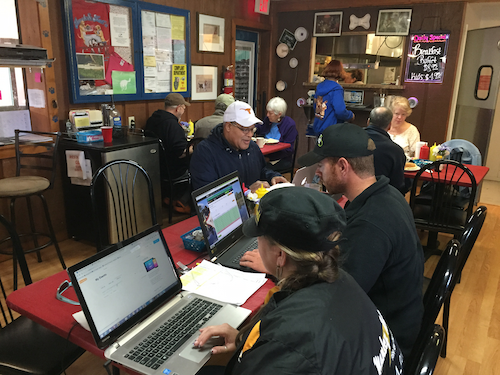 In 2015, the following fishing tournaments used the iAngler Tournament System: