Kayak fishing world records are poorly recorded and vehemently argued, but some records are unquestionable. Raf Vargas’ 170-pound dogtooth tuna, caught off the coast of Guam, is an island record and possibly an IGFA World Record.

One of the largest pedal-out fish, Vargas’ catch was fooled, hooked and landed without assistance. Then he caught a ride back to shore. Who needs kayak fishing records when paddle and pedal anglers are breaking world records?

I learned how to fish for bass when the Air Force stationed me in Louisiana. Then, I was transferred to Nebraska where I started a bass tournament series. Now, I’m stationed in Guam and I’ve turned my attention to offshore pelagics.

Working with local anglers, we’ve pushed the limit of kayak fishing. This year, I hooked up with a group of Japanese anglers who specialize in slow-pitch jigging, dropping special lures up to a 1,000 feet deep.

Dogtooth tuna are one of the most respected bluewater bruisers. Anglers all over the world list this snaggle-tooth silver missile at the top of their life list.

Dogtooth tuna aren’t really tuna. More closely related to bonita, dogtooth tend to live around reef structures instead of traveling the world like their pelagic cousins. I’ve caught a few dogtooth tuna and lost many more to their sharp teeth.

You can catch dogtooth on the reef with topwater poppers or light jigs, but I usually fish in water from 300 to 1,200 feet deep. This day, I was fishing over a steep drop bottoming out at 750 feet. I dropped 700 feet and made two bounces when the dogtooth slammed my lure.

Fishing had been slow. After five hours without a bite, I turned to pedal four miles back to the launch site. On the way in I marked a dramatic precipice on the fish finder, I stopped to investigate. I dropped the jig and the fish piled on in seconds.

I fought the fish for almost two hours. I couldn’t let go of my rod long enough to get a drink of water. When I saw the size of the fish, I realized I had another problem: how would it fit in my kayak? Exhausted, with the wind picking up to 20 knots, I slid the six-foot fish into my Hobie Pro Angler 14.

Shortly after I posted photos of the fish on social media, a representative from Guam’s Department of Agriculture called to tell me I set a new island record.

Then, people started saying the catch is a kayak fishing first. The next day, I contacted the International Game Fish Association about a possible world record. They coached me on filling the forms and sending data, measurements and line from my reel.

I am waiting for the results. My social media posts and videos have gone viral and the story has appeared in magazines and newspapers around the world. My dogtooth tuna was 170 pounds and 75 inches to the tip of the tail.

Regardless of IGFA’s decision, this fish is my biggest catch and the fish of a lifetime. 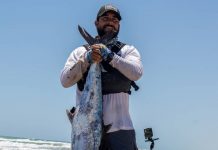 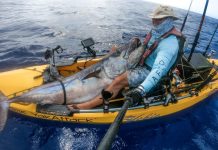 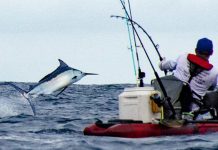 Proof That Kayak Fishing Has No Limits