For the kayakers of antiquity, a paddle was as valuable a tool as the harpoons and spears they used to subsistence hunt. That’s because the raw materials to build a paddle were hard to find in the rock and ice of the Arctic. And a person living in a coastal environment wouldn’t last long with a broken kayak paddle, so the design had to be robust.

To build a paddle, these early kayakers had to find driftwood washed up on the shore, logs carried by river torrents or wood gathered from distant tree lines. Then, they would carve the handle and lash together different components to make the blades.

There is evidence the paddles we use today were influenced by the maritime hunting styles of the earliest kayakers. Like modern kayak anglers, the paddlers of the past determined the length of their paddle by the size of the kayak and sitting position of the paddler. Ancient kayaks came in many sizes and shapes. Some kayaks had a higher cockpit. Some paddlers kneeled in the kayak while others sat on an elevated seat.

Single blade canoe paddles required less wood and were the primary style of almost every kayaking region throughout the Arctic and sub-Arctic.

Longer, double-blade paddles were more like flattened planks with ends fashioned out of a broader blade spliced into the handle. Some of these early kayak paddles were formed with a concave blade surface.

To reinforce the blade edges, paddles were fitted with whalebone or ivory inserts. Hard to believe these were the first composite paddles.

Other innovations inspired by early paddlers include an oval-shaped shaft for better grip and comfort. The wide side of the oval was aligned at right angles to the blade face and located at strategic gripping positions.

Travel forward in time to the early part of the twenty-first century. Many of these creative innovations are still apparent in today’s modern, high-tech, composite paddles.

For the kayak fishing industry, paddle innovations have advanced this heritage even further as adaptations to traditional kayak gear focus on the functional utility of a paddle as a tool. Ancient peoples used the paddle for more than propulsion and modern kayak anglers do the same.

Andrew Stern, marketing manager at Bending Branches has seen many years of paddle development. He starts, “Kayak anglers want to fish, and happen to do it from a kayak, so the paddle is a tool.”

The popularity of kayak fishing required a shift in thinking for a company that started making touring and canoe paddles. Bending Branches angler-centered paddles were introduced in 2011.

Making the transition from whitewater and touring paddles to kayak fishing paddles might seem easy. Stern and Robertson disagree.

First, fishing kayaks are significantly heavier and wider than a touring kayak. To move through the wind and current, a heavier boat requires a stronger paddle. On top of that, a sit-on-top paddler is perched up to a foot higher and standup fishing puts even more stress on the paddle.

Tyler Robertson at Werner recalls, “In 2011, a typical long paddle was 240 centimeters, now paddles are up to 280 centimeters.” That’s almost 16 inches difference. Andrew Stern warns, “You cannot simply take a normal paddle and make it longer and expect it to hold up fine.”

[ See also: Find The Perfect-Sized Paddle For Your Fishing Kayak ]

In fact, kayak anglers put further pressure on paddle designers by requiring a shaft with adjustable length. Many fishing kayaks have a seat that can be positioned in high position for fishing and low position for paddling. To accommodate multiple paddling positions, many fishing paddles have an adjustable shaft to dial in the perfect fit.

Many strengthening innovations evolved from whitewater kayaking pushing strength and durability to the limits. Like the best whitewater paddles, fishing blades are enhanced with tips and edges reinforced with fiberglass or the composite Dynal replacing the whalebone of early paddles.

Whitewater paddles are shorter with wider blades for a powerful stroke against river currents. Like a whitewater paddle, most fishing paddles are designed for a high angle stroke where the shaft is closer to vertical and the blade is drawn close and parallel to the boat. This is a power stroke so fishing blades are typically shorter, wider and often stronger than those used in low angle, distance paddling.

[ Read more: 7 Tips For Anglers Who Think They Know It All ]

The future of paddle design moves forward with other advances in kayak design. The popularity of pedals and motors requires paddle designers to reinvent the wheel. At Bending Branches, Andrew Stern admits, “The biggest problem for a paddle company…is the move towards pedal and mechanized kayaks.”

While he encourages pedal and power anglers to carry a quality paddle for maneuvering the kayak, Stern realizes non-traditional kayakers often forego the advantages of a good paddle. He teases, “We have a handful of exciting products on the horizon as we look for new tools to enhance the kayak fishing experience.”

Tyler Robertson from Werner adds to Stern’s optimism for paddle design, “We are constantly looking for new materials, new methods of construction and ways to improve on our production processes to become more environmentally friendly.”

Paddles are Your Most Important Tool

From the first paddlers to modern kayak anglers, paddle design has been the most important tool in our collective arsenal. Like the old days, the paddle remains a tool to address the demands of the kayak instead of the kayak being restricted by the limitations of the paddle. 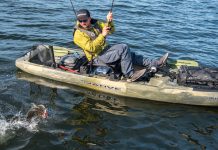 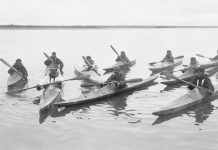