Melinda Parnell quickly went from kayak fishing newbie to old salt. Three years ago, Parnell and her husband Michael bought their first kayaks and started inshore fishing. Before long, the Pensacola, Florida, resident got a taste of offshore fishing out of Navarre Beach. Last summer, Melinda caught a 36-pound, 49-inch king mackerel to set a high mark in her pursuit for trophy pelagic fish. According to Parnell, she’s setting her sights even bigger.

I was one of those people who thought fishing without a motor was stupid. Fast forward a year, after my husband and I lost a combined 300 pounds, and some friends introduced us to kayak fishing.

A month later, we were pedaling our own fishing kayaks and exploring local inshore fishing. Eventually, we hit the offshore scene pretty hard, and this king mackerel was the result. I don’t really care much for inshore fishing anymore.

I wasn’t specifically targeting king mackerel, but I definitely wasn’t opposed to catching one. I was really hoping for a king or cobia. I hadn’t caught either, so they were on my bucket list.

After a long day fishing, I was trolling an Overcast Lure Company Squid Fish lure back to the beach. I decided to drop on one last reef before calling it a day.

[ See also: How To Troll From A Kayak And Catch More Fish ]

About the time I picked up my bottom fishing rod, the drag on my trolling rig started screaming and kept screaming. I got nervous. The weekend before, I lost two big kings because I tried to horse the fish to the boat. So, I babied this one.

When I got the fish close enough to see color, I couldn’t believe how big it was. Then, it took off again, pulling drag and taking me on a ride. As I worked the king close to the boat, I realized something: I had forgotten my gaff. I called my husband and he brought me his gaff so I could land the fish.

Looking to the Next Achievement

I was already pumped about offshore fishing, but this fish fueled the fire. I couldn’t wait to get back out and the excitement still hasn’t gone away. When the pictures hit social media, my catch got a lot of attention. Most people are surprised to see a woman kayak fishing offshore.

I’m not trying to be a one-hit wonder, so I’ve got to step up my game. I’m hoping for a cobia or even a grouper and, of course, I’d welcome another king mackerel any time.

Send your fish tale to [email protected] or use #kayakangler or @kayakanglermag on social media. We’ll choose the best, and maybe worst, stories to publish in the next issues of Kayak Angler. 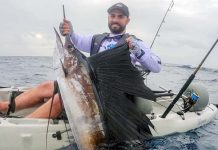 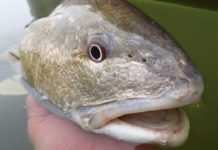