Speaker 1: Are you sure it’s still okay to go paddling today? Maybe we should check the forecast.

Speaker 2: No… it’s all fake news anyway. Besides, it’s probably going to be hot. Especially with all this global warming…

[ View all technical outerwear in the Kayak Angler Buyer’s Guide ]

Salty Jefferson: I learned that lesson the hard way!

Salty Jefferson: Me and my pal Dready Doug were headed out for a paddle. My eye socket was aching something fierce, felt like there was a storm a-brewin’. I went to check the radio, but Doug wouldn’t let me touch it. The only think he would listen to were those live Steely Dan cassettes. We got out on the open lake and the weather went to heck, felt like it was raining sour eggs and rancid T-bone steaks. We flipped, I washed to the beach, but never saw Doug again. Never listened to Steely Dan again neither. That’s why I always check the forecast. And you should too.

Paddle sports currently has an inordinately high rate of accidents and deaths that for the past five years has been increasing, while power boating stats have been decreasing during the same period. 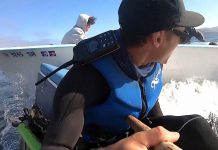 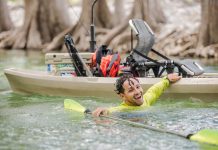