Whether you’re looking to stay close to home or travel to a bucket list getaway, half the fun of fishing is hitting the road. Despite recent restrictions on travel, anglers are looking for places to visit as soon as life returns to normal. This year, Kayak Angler is profiling the most popular fishing destinations according to Google.

We asked our pool of contributors to share their favorite fish story from these sought-after spots. Some of our sources are locals, while others were on the trip of a lifetime. Each expert provides all you need to know to plan the perfect getaway. As soon as the world returns to normal, and the roads and airports reopen, we’ll be ready to visit these top kayak fishing destinations.

Bart Swab, owner and guide at Action Kayak Adventures and a South Florida native, describes Daytona: “There are plenty of places to drop a kayak from the side of the road and sneak back into the grasslands. I often fish the scenic loop road north out of Ormond Beach. It’s a nice drive and there are great places to launch a kayak.”

Read Most Popular Kayak Fishing Destinations: Daytona Beach for Swab’s story on how to find snook at the northern end of their range.

Kevin Hofer has fished Northern California for three decades, but there was one place he had not explored. “I never fished Lake Tahoe,” he says. On assignment for Kayak Angler, Hofer hit the lake between the summer chaos and winter snow. “The crowds were gone but the water was still warm.”

Michael Thompson has lived in Minnesota for most of his life. After a year travelling the country to compete in fishing kayak tournaments, Thompson decided to explore his own backyard. “Minnesota is a wilderness state but, I caught my biggest muskie in sight of the Minneapolis skyline,” he laughs.

Check out Thompson’s Most Popular Kayak Fishing Destinations: Minneapolis, Minnesota to learn how you, too, can catch monster muskie within sight of downtown.

Alex Tejeda is a professional guide and regular Kayak Angler contributor. His playground is the Miami backcountry and Florida Keys. “One of the central locations is Sugarloaf Key,” he says. After years of experience exploring the mangroves and flats, Tejeda is still surprised by the incredible fishing.

Professional photographer and outdoor writer, Andy Hagedon travels the world from his home in Charleston, South Carolina. When he’s fishing at home, Hagedon has a difficult decision to make. “The Lowcountry of South Carolina offers access to trophy largemouth and striped bass only a few miles from redfish, trout and flounder,” he says.

With freshwater to the west and saltwater to the east, Hagedon helps you choose in Most Popular Kayak Fishing Destinations: Charleston, South Carolina.

Dustin Doskocil is one of the first photographers to focus on kayak fishing, having filmed the biggest names in the sport for the biggest companies in the business. Four years ago, Doskocil took a leap and moved to Denver, Colorado. Since then, every fishing trip has been a discovery.

In Most Popular Kayak Fishing Destinations: Denver, Colorado, Doskocil invites you to the snow-peaked mountains, bottomless lakes and fun trout fishing of Colorado.

Host of Next Level Fishing and Kayak Angler contributor, Chris Castro fishes Texas from border to border. He says some of the Lonestar State’s best fishing is in Galveston Bay. “Fishing Galveston Bay is guaranteed to get anyone out of bed early,” he says.

Check out Most Popular Kayak Fishing Destinations: Galveston, Texas, where Castro unlocks the secrets of the Lone Star State’s endless marshes and bays.

Southern California native and host of The Kayak Fishing Show, Jim Sammons has been paddle fishing the Baja California peninsula since before kayak fishing was invented. “When the waves were flat, we would paddle our surfboards out and catch calico bass,” he remembers. After decades fishing, paddling and exploring in Baja, Sammons says there is still more to discover.

The Bahamas are a short distance from southern Florida, but it took Extreme Kayak Fishing Tournament director Joe Hector to put the island chain on the map for kayak anglers. Each winter, for four years, Hector and his team organized the Battle of the Bahamas offshore kayak fishing tournament. Hector laughs, “Now I think, how the hell did I pull off that tournament?”

Continue reading Hector’s Most Popular Kayak Fishing Destinations: Bahamas for the lowdown on the wild side of fishing a tropical island paradise. 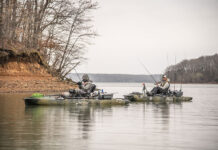 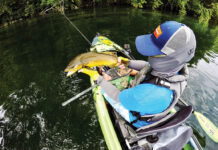