I found myself waking up sitting in a boat moored at Gaston’s White River Resort docks. The coffee hadn’t kicked in yet, but the jitters would start soon. Guide Roger Hicks untied the boat before I could realize what was happening and backed into the White River; banging and slamming against the surrounding boats and dock and anything else close by in the process.

The White River is a famous trout tailwater in the Ozarks of Arkansas; a fishery where the brown trout World Record has been broken more than once. The trophy trout mounted on the local tackle shop walls would make any expert fisherman weep. 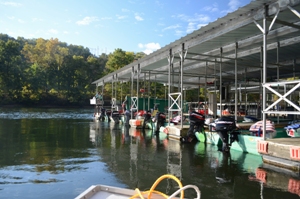 The docks at Gaston’s had more than 40 boats on it.

“This really isn’t the best time to be fishing here,” said Hicks, “if you come the last week of January, or the first two weeks of February you’ll catch those trophy browns. Early spring is the best time for trophy rainbows.” He explained that all the stocker sized rainbows grow 1-2 inches a month during the winter and become 18 or 20 inch fish by spring.  Too bad I was already sitting in the boat.

Hicks started me bouncing bottom with a Powerbait pink worm and white egg. As a fly fisherman, I should have scoffed at the idea. I should have turned up my nose like a proper snob and said, “no thank you sir, it’s dry fly or bust for me.” I was already sitting in a boat with a motor, so I shut up and started fishing. When there is one or more generators running at the dam, paddling the river in a kayak is possible, but very tough. There wouldn’t be much chance of fishing from a kayak unless you floated the river instead of paddling it.

Pretty soon I felt a bump, watch the line go tight and set the hook. Hicks netted the first rainbow trout I caught in Arkansas and said, “for this time of year, that’s a trophy.” The ‘bow taped out to a whopping 14 inches- a monster. 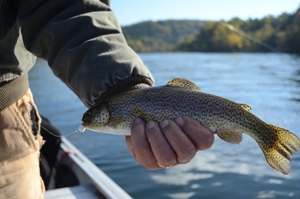 The rainbows were all stocker sized, but colorful and spotted.

The next three were all about the same length: a stocker sized 8-12 inches. These fish were healthy and fought well, but I wish the season was right. A 20 plus rainbow trout is what keeps us fly fishermen up nights. I might have even lied and said I caught it on a fly rod in a kayak. I’ll have to wait until next time for that morality test.

In between catching rainbows Hicks told me his life story: 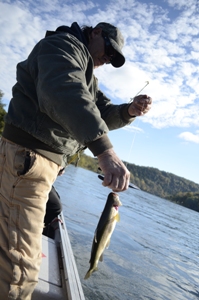 Roger Hicks unhooks one of the many rainbows caught that day.

My rod doubled while I was listening to the story. The drag wasn’t moving and the rod wasn’t bouncing like a normal fish. “Dude, that’s a trophy brown,” said Hicks.

Before we could find out who was right the fish/log slipped the hook. “Dude, that was a fish of a lifetime,” said Hicks.

I still think it was a log, but that may be a defense mechanism. A “fish of a lifetime” that you lost will keep you up nights even worse.

Join Ben Duchesney on the rest of his trip through the Ozark region of Arkansas. Tomorrow is his last chance to catch a trophy rainbow before going back home and facing reality. Fortunately, Ben  fishes enough that he can escape reality back home, too.

3 Reasons The Last Minute Trip Will Set You Free