We pulled off a main road cutting through a mix of canyons and valleys onto a gravel road leading into woods. We turned up a steep washout and came to a stop in front of a log cabin with a fire flickering in the front yard. After a four-hour flight from Boston, a three-hour layover in Houston, another one-hour flight to Little Rock and a three-hour drive to St. Joe, finally arriving at the fish-camp was an overwhelming relief.

The smell of barbque transported me from the van to a seat on a comfortable log next to the raging campfire. Big Springs Restaurant had set out two smoked chickens, slow-smoked barbeque beef brisket and red wine from musician Dave Matthew’s vineyard. 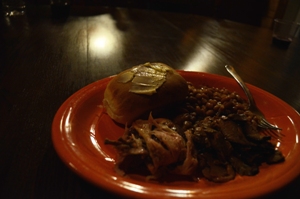 All homemade, all delicious.

Soon, an old, rusty Toyota pickup pulls in with a cooler loaded in the bed. A young bearded man steps out of the cab and says, “I brought cold beer,” and everyone cheers. “I also brought some moonshine,” he says, pulling a mason jar from his truck. He must be kidding; the liquid in the jar is the color of copper. “It’s apple pie moonshine,” he says. For the record, it is legal in Arkansas to make up to three gallons of moonshine for personal use.

We go inside the log cabin where it is warmer and cozy. The smell of cooking meat and simmering baked beans fills the room and seems to soak into the wooden walls. Campfire smoke creeps through the front door bringing with it a character with a white bear and red shirt. He looks like Santa Clause except a red and white bobber hangs from his hat and a banjo is riding on his shoulder. “This is Bear,” says the man who brought the moonshine. 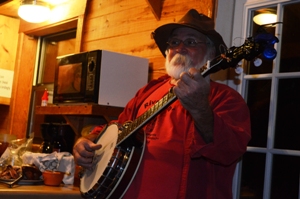 Bear serenades the group while we sip moonshine.

Bear entertains the onlookers who are already full of BBQ and buzzed on homegrown ‘shine. The songs are mostly full of jokes, but every few are hymnals for Arkansas or the love for the crooner’s mother. Someone asks Bear if he wrote all his songs. He laughs, pushes his moustache up and down like a cartoon and in a soulful southern drawl, he says, “I stole everything I’ve ever sung.”

After a little while Bear runs out of songs to sing and he fools with the strings of his banjo. “Drink some moonshine,” someone says, “it’ll help the songs to flow.”

Bear decides to sit outside by the fire. I go back to my own log cabin for the night and try to sleep. My head buzzed from the apple pie moonshine. It was as smooth as apple juice going down, but shook your consciousness as soon as it hit the bloodstream. It was tempting to drink the entire glass with each sip, but seeing the locals sip it slowly made me cautious- and thankfully so. 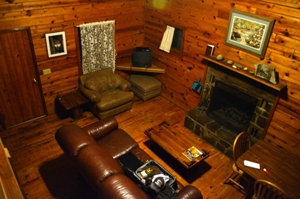 The log cabins were comfortable and the fireplace came in handy later.

Tomorrow morning I will be on the hunt for smallmouth bass on the Buffalo River. This night, the warm liquid and hot food have my head spinning with dreams of the trophy smallies and tricky rapids that lie ahead.

Join Ben Duchesney as he travels throughout the Ozark region of Arkansas. After this welcome, he expects the fishing to leave an even bigger mark on his senses, nerves and memories. 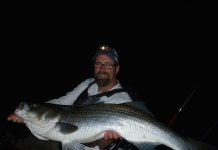