Mercury Marine has made history today by creating a new way to fish from your kayak, with a new outboard for your fishing kayak called: The Kayak Blaster. For only $4,012.016 you can now rig up your little plastic boat with a big 350 outboard to rip around the lake faster than a trucker runs to the can after a gas station breakfast burrito.

The outboard attaches to your kayak with the same transom mount you’d use for mounting the motor to your bass boat, only the Kayak Blaster kit also comes with a 200lb counter weight for the front of your boat.

As if releasing a revolutionary product like the Kayak Blaster wasn’t enough, Mercury has also partnered with an up-and-coming kayak angler and added him to their new kayak fishing pro staff team. JimJohn “I F$%&#@! Love Kayak Fishing” Bradford says he couldn’t be happier joining such a prestigious team and has already mounted the Kayak Blaster to his fishing kayak. “I couldn’t wait to get the motor rigged up on my kayak,” he said. “Plus, with that counter weight on the front, the bow only rides up about an extra foot or two in the air. Can’t get better than that.”

Bradford is planning to fish with the Kayak Blaster at his next tournament and says he’s already added Mercury’s logo to his kayak fishing jersey, along with 54 other brands. When asked if he was sponsored by any of the other brands, he shook his head and said, “No, but I know that once they see how truly dope I am at kayak fishing, I know they’ll all want to sponsor me.”

Other pro staffers are already trying to join the Mercury kayak fishing team. Famed pro staffer Bobby Forest says, “I think I’d chop off my left arm to get me one of those Kayak Blasters. I just know that it’s going to change the way we all fish.”

For more information about Mercury Marine, or to pick up your own Kayak Blaster, check out their website, MercuryMarine.com. 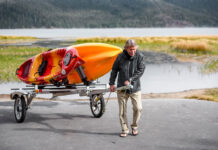 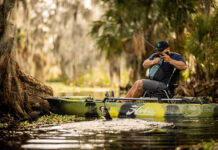 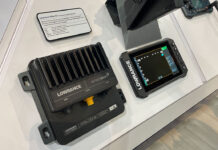 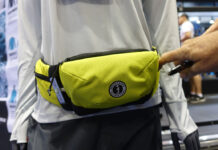