The best thing about editing a fishing magazine is four times a year I get to write the tackle column on gear I dream of using. For the Fall issue, I dropped in on Wilderness Systems pro guide and manager at Ocean’s East Bait and Tackle, Mark Lozier. “What’s hot?” I asked Lozier. And he took me on a tour of shelves full of the latest hard baits that haunt every angler’s dreams.

[ See also: Why Are Anglers Fishing With Larger Lures? ] 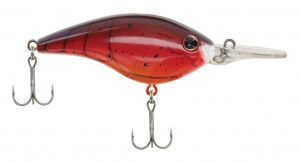 Bassmaster Classic champion David Fritts is a world-famous crankbait master, exactly the person you’d want designing a new line of old favorites. The Frittside crankbait comes in dive depths from five to nine feet, the deeper baits feature a weighted bill to get down fast. Fritts gave his new crankbait a classic flat-side with a tight wobble and pronounced flash. Berkley’s Fusion hooks have a non-stick coating to penetrate thick-jawed fish.

Spy baits are the hottest hardbaits to hit the water. Described as a finesse tactic, the long, narrow body is preceded and followed by small blades. To work a spy bait, cast the lure with a spinning rod and 10-pound braided line.

Designed by one of the top BASS Elite anglers, John Crews, Spro’s new Spin John 80 packs everything learned about spy baits in one package. The Spin John is ballasted to sink slowly and horizontally while slightly rocking. On the retrieve, the propellers spin on swivels, which also prevent a fish from using the lure to unpin the hooks.

Lozier’s first stop was an end cap stocked with realistic, life-size rats, spiders and frogs. He handed me a snake, “We can’t keep these on the shelves.” The eight-inch snake imitation looked real enough to slither out the door. Lozier explains the lure is designed around a 3D scan of a real snake. Savage Gear gives the snake through wire rigging and a spinning rear hook to snag an attacking fish and keep it hooked. Even if the snake doesn’t catch fish, I can use it to scare away the competition.

[ Read more: How To Keep Your Fishing Lures From Rusting ]

RipStop’s name says it all; the lure works best alternating between hard pulls and long pauses. The action starts in the Minnow’s boot tail that produces quick starts and abrupt stops.

“This one’s called Chug Norris,” Lozier chuckles, handing me a four-inch topwater popper painted like a mackerel. Upon closer inspection, the little popper is no joke. Designed by the famous Australian offshore fishing team on the Nomad, the Chug Norris features a cupped face with a square opening and round cup.

This creates a loud plop as water rushes into the opening and has no way to escape. Built to take abuse from the biggest predators, the Chug Norris is made with a thick ABS outer skin, foam core on a stainless-steel plate locking in the hooks, making Chug Norris as deadly as its namesake. 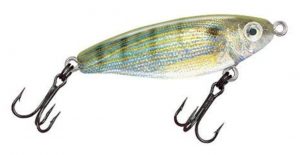 Even for a professional fishing guide, Mark Lozier is famously tight lipped. But he let his latest secret slip when we passed the wall of MirrOlures. “The new Skin Series is getting a lot of attention,” he divulges. My ears perked. MirrOlure’s iconic MirroDine series is now available with a lifelike image of real fish skin, complete with flash and depth. The suspending twitch bait works best when jerked violently, then paused. Trout, redfish and striped bass react to the shad, pilchard and pinfish imitations.

These hard baits will have fish wondering what hit them. | Feature photo: Ric Burnley 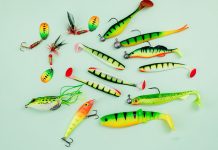 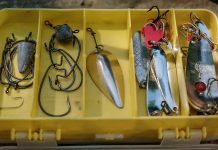 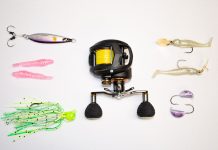 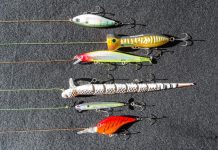 6 Hard Baits Both Anglers And Fish Dream Of 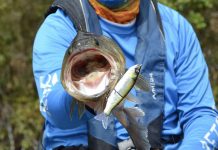 Why Are Anglers Fishing With Larger Lures?