I’m going to do something I’m not sure Kayak Angler has ever really done on this website, maybe ever, at least not to the extent of writing a whole article about it. I’m going to speculate folks. This isn’t meant to be clickbait, I’m not trying to even get you to read this. No, this is more of a call, nay, a softly begging request to GoPro (or any other action camera manufacturer for that matter) to take my advice and release something that will really change the game.

That’s what I heard in a very vague rumor from an unnamed source (not at GoPro, just in the fishing industry). “GoPro says their going to be releasing something that is going to change everything.” That’s the exact quote of the mystery person, that I honestly forget who it was, but I do remember that they’re usually on to something, whether it’s a good story or fish. That’s a person you can trust.

What do I think GoPro is coming out with? Honestly, it could be anything. Need a GoPro built right into your polarized shades? Maybe. How about an action camera bra…no not a chest strap, like a real one? Doubt it. A new editing software? Maybe, but I hardly think that’d change much in the action camera world. What do I think they should come out with? VOICE COMMAND! Please people who pull the strings over in the GoPro HQ, give me a camera, even if it’s still the same Hero4 Black we reviewed in the past, or the new Session (review coming soon), give us a camera that can listen to us when we’re paddling, fishing, running, mountain biking, and all the other weird stuff film these days.

Listen, many people have problems with GoPro cameras, but regardless, they’re awesome. The fact that you can have a handful of cameras (seriously, Robert Field had five on our Adirondack trip, watch this and you’ll believe me) that can handle practically any weather or conditions and still keep filming, even when tucked into ridiculous positions? Awesome. Even better though, can you imagine hooking into a fish or setting yourself up on a sick line on a section of whitewater and yelling out, “Hey GoPro, record video.” Like magic, you have your own camera person, mounted wherever you want. “Hey GoPro, switch to timelapse mode.” Bam, bam, bam, sick stills of your fish fight, ready for bragging on social media.

I can’t think of any other feature more game-changing than voice command in my action camera. If GoPro wants to really make me a believer that they’re working towards creating the best action cameras around, this is what they should be working on. Do I think I’ll be seeing this at ICAST 2016 this year? I hope so, but I wouldn’t be surprised if that’s still down the road. Do I think GoPro is going to read this and take my advice? Yea right. If they did, I wouldn’t be writing this, I’d be sitting on my kayak in the middle of some gorgeous flat halfway around the world with a cold one and a fly rod in each hand…forever. For now, I’ll continue to hope. 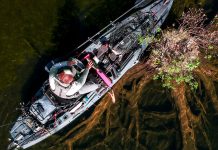 Measure Up Your Catch With The Right Bump Board 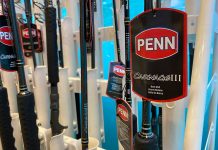 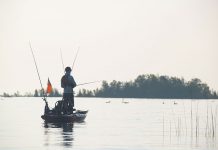 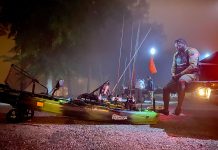