The Sun Dolphin Boss 12 SS is a fully featured, sit-on-top fishing kayak. With an elevated seat, huge tankwells and a standing platform built over a catamaran hull, Sun Dolphin clearly designed the Boss 12 to compete with dedicated and higher-priced fishing kayaks.

Sun Dolphin is a Michigan-based brand that’s part of KL Companies Inc., the largest kayak manufacturer by volume in the world. As such, you are likely to have stumbled across a large number of Sun Dolphin kayaks at retailers and on waterways.

The Boss 12 has what Sun Dolphin refers to as a catamaran-style hull, though it could even be considered a tri-hull of pronounced pontoon-like shapes that provide platform-like stability. The Boss 12 also comes with a raised seat; a flat, open cockpit for standing casts; and deep tankwells for loading up plenty of tackle.

These are all features which make the Boss 12 stand out as Sun Dolphin’s most fishing-centric kayak design. We will discuss each in more detail as we walk through this Sun Dolphin Boss 12 review. 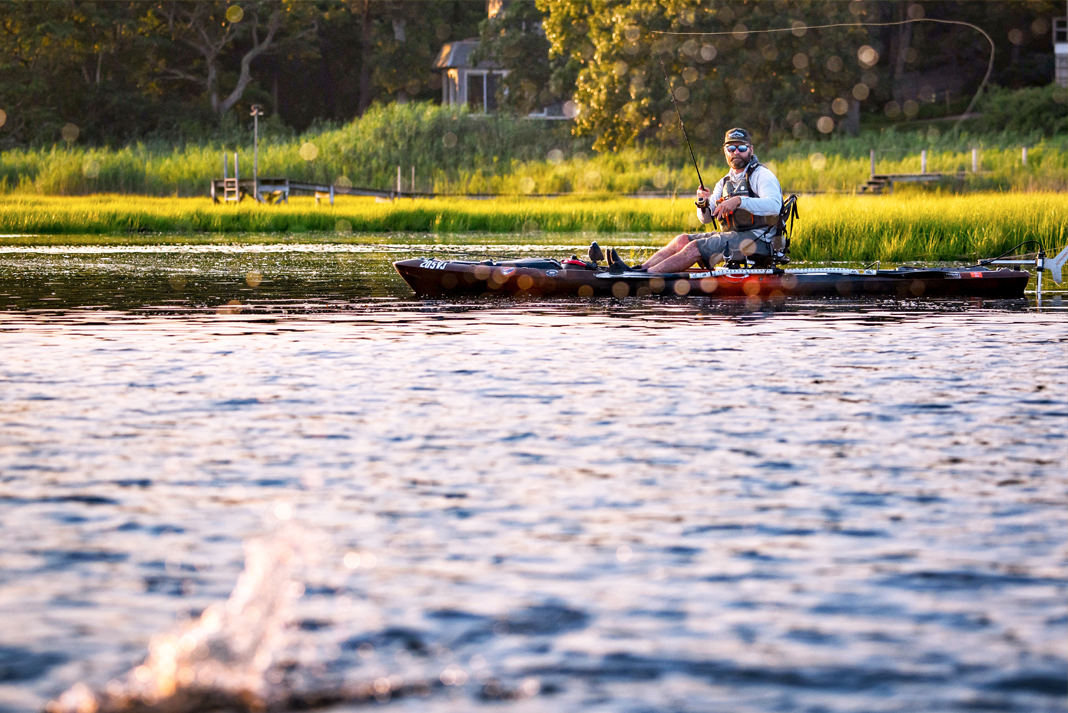 On the water with Sun Dolphin’s Boss 12

The Boss 12 has what Sun Dolphin refers to as a catamaran hull. This double-tunnel hull has a pontoon shape at each edge, set a short distance to either side of the large keel running down the center of the Boss 12. The tunnels between the keel and each pontoon are bridged with a shape similar to an upside down U. A pontoon-style hull is very stable and the ample 33.25-inch width also contributes. The Boss 12 SS’ stand up capabilities are aided by the large platform to make stand-up fishing safer and easier.

Just what does it mean for a kayak to be stable? Kayaks have what are called initial and secondary stability. The stability is influenced by how much surface area is making contact with the water. When a kayak is sitting flat on a calm pool it behaves according to its initial stability. When it rolls toward one side or another, such as in waves, this is the kayak’s secondary stability coming into play.

Through sheer surface area, the catamaran hull delivers good initial stability. It’s rounded edges, where the bottom and sides meet, also contribute to improved secondary stability, but generally there is a trade-off between initial and secondary stability. When it comes down to it, it’s hard to get this catamaran hull to heel off its base. Take that as a hint not try too hard to tilt it.

To take full advantage of this initial stability, the Sun Dolphin Boss 12 has a flat and open floor plan with a large traction pad. In traditional kayaks intended for staying seated you will notice there are curves within this footwell area following the overall shape of the hull. The Boss 12’s open flat area provides the standing platform for increased casting ability and sight casting.

Who is the Sun Dolphin Boss 12 SS intended for? Someone who takes their kayak fishing seriously. The standing platform, elevated seat, spacious tankwells and numerous rod holders leave little to be desired.

At 78 pounds, the Sun Dolphin Boss 12 is heavy. Without having a pedal drive or motor it isn’t going to cover a lot of ground as a paddle kayak. The elevated seat also does not provide as much leverage for powerful strokes under difficult conditions. The design is also meant to value stability over speed or maneuverability.

About the Sun Dolphin Boss 12 SS

Thermoforming is done by taking sheets of plastic and softening them to a pliable state. They are then put on a mold and shaped to form. The Sun Dolphin kayak begins as two major halves joined together at a seam. Thermoformed construction creates a plastic kayak that’s sleeker-looking than rotomolded polyethylene kayaks.

This Sun Dolphin Boss 12 SS fishing kayak is loaded with outfitting and accessories. Let’s take a walk from bow to stern and discuss everything pre-installed on the Boss 12.

At the bow of the Boss 12, a grab handle makes it easy to pull the heavy craft up on a beach.

The space in front of the paddler’s feet is occupied by a tankwell, a hollowed out storage area on a sit-on-top kayak. This forward tankwell is large enough to store a small cooler or bags of gear and also includes a bungee rigging system at deck level to keep gear secured.

Carry A Whistle (And A Light For Night Use)

An off-the-shelf Sun Dolphin Boss 12 has five rod holders, four of which are flush-mounted and located in pairs in front of and behind the cockpit. The fifth is an additional swiveling rod holder included with the Boss 12  that you insert in a centrally located port for active fishing.

There are two large rectangular hatches in the Sun Dolphin Boss 12. The first is in the cockpit between your legs.These hatches provide storage within the interior of the Boss 12 hull, as well as access to the inside of the kayak.

The hatches have a hinge opening, and a removable liner bag within. This liner keeps gear you stow inside the hatch from rolling around the interior of the hull. They are easily removable should you have to access part of the kayak for a small repair or accessory installation.

On the floor of the cockpit you’ll notice the wide open flat space and floor padding. This traction padding makes it much easier to keep your footing on a wet plastic floor while standing up to cast or land a fish.

Also on the floor of the kayak you will see the scupper holes. Scuppers are the drain holes which allow water to empty out through the floor of the kayak. The Boss 12 has eight of these scuppers all together. Water will also lap up through the scuppers, and scupper plugs are a great idea for flatwater days. If scupper plugs are not available where you purchase the Boss 12 you can buy them from Sun Dolphin’s accessory brand Extent Paddle Gear.

One of the best features of the Sun Dolphin Boss 12 SS is the elevated folding seat, which provides a higher vantage point for sighting and casting for fish. This could also be described as a lawn chair or stadium-style seat. The elevated seat has a high and low position, both of which keep you off the floor of the kayak, which equates to staying relatively dry.

Elevated seats are comfortable but they do provide a higher center of gravity, which can feel more unstable. If you are in calm water and seeking the most visibility and upright seat position, place the seat bar on the high position. If the ride is going to include a bit of turbulence, clip the Boss 12 seat in the lower position.

Behind the seat you will find the second gear hatch, which also includes a liner.

The stern tankwell is recessed and massive. It’s big enough to fit a cooler, or your favorite milk crate full of tackle.

Finally at the stern we have another grab handle, and one of two drain plugs (the other is at the bow). The drain plug allows you to empty any water which has found its way inside the kayak through screw holes and seams.

The outfitting and accessories included on the Sun Dolphin Boss 12 leave little left to add. One of the popular modifications made by users is not so much an upgrade as it is a repair to a potential seat issue.

Users have reported that in hot weather when plastic is more pliable the elevated seat tray has collapsed under loads, sending the seat to the floor of the kayak. If you purchase the Sun Dolphin Boss 12 you should be aware of the potential design flaw. Consider making a preemptive seat fix by providing additional support to the seat bars.

How the Boss 12 compares

The Sun Dolphin Boss 12 SS is far from the only option for fishing kayaks. The Sun dolphin lineup itself has less extravagant, yet more portable boats such as the Journey 10 and Journey 12. Beyond this there are other boats with similar features available at popular retailers.

Where to buy the Boss 12