When I first saw the new Ascend 133X at my local Bass Pro Shops, I pictured myself rigging the wide-open kayak with motor and electronics, loading it with camping and fishing gear and heading to a distant island too far for my paddle kayak and too shallow for motorboaters.

Standing in the Bass Pro Shops’ showroom, I also imagined using the Ascend 133X for afterwork getaways when I grab a couple rods, a box of tackle, paddle and PFD and slide off to my favorite local fishing spot.

With an open cockpit and large bow and stern deck, the 133X is begging for motors, electronics, lights, Power-Pole and other features found on a small motorboat. On the other hand, at 13 feet long and 36.5 inches wide, the Ascend is nimble enough to power with a kayak paddle. 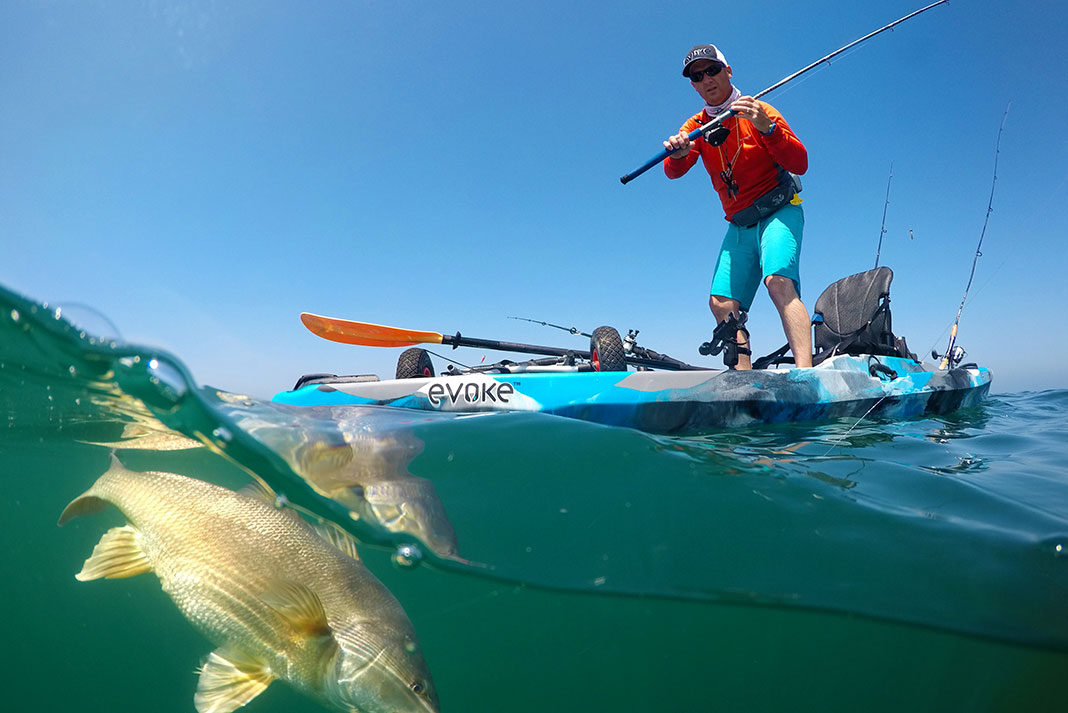 The Ascend 133X uses a catamaran hull with deep pontoons and a pointed, flared bow. This design makes the Ascend super stable, a prerequisite for standup fishing. The pontoons improve straight-line tracking and prevent the Ascend from sliding sideways under motor power.

The topside of the Ascend 133X is a gear junkie’s dream. From the bow to stern, the deck and tankwell are wide open for tackle, camping equipment, livewell and cooler with plenty of room for fishing.

Just ahead of the seat, a large, watertight square deck hatch offers below deck storage and access to rig wires. Speaking of access, the 133X has removable plates in the bow and stern to run wires and cables. A transducer scupper in the bow leads to a cavity on the underside that accommodates the transducer.

In the bow, the Ascend has a 12-volt plug to connect a trolling motor and an accessory plug for lights.

I was happy to see a premium high-low seat on the 133X. Rigging the boat with a motor leads to long days on the water. The Ascend splurges on a highback seat with padded mesh that dries fast and provides comfortable padding and support.

The Ascend 133X is a kayak with a split personality: small enough to paddle and big enough to motorize. To explore the boat’s versatility, I first tested the boat on an afternoon fishing trip.

Straight out of the cardboard and bubble wrap, the Ascend 133X is ready for fishing. Before I had time to rig the boat to the gills, I took the 133X on a bare-bones mission to test paddling capabilities.

To use the boat under paddle power, I cut the rigging to a minimum to reduce weight and improve convenience. I rigged the Ascend 133X with a YakAttack BlackPak Pro 13-by-16-inch crate.

Instead of the full complement of electronics, for my grab-and-go fishing trip, I simply attached my basic color FishTrax 1c fish finder and kayak mount. The fish finder display and transducer attach to a mounting base connecting to a gear track. The FishTrax 1c runs on 12-volt or AAA batteries, so I didn’t even have to rig wires to the four-inch fish finder.

Flush mount rod holders behind the seat provide a convenient place to stick my rod when changing lures or unhooking a fish. To paddle beneath overhanging limbs or through a low bridge, I stick my rods in molded horizontal rod holders in the gunnel.

Keeping it simple makes it easy to get on the water with the Ascend 133X. But, to reach the boat’s full potential, the 133X is begging for an electric motor. A flat area in the transom is pre-rigged with four inserts for a trolling motor or electric outboard. The bow is wide and flat with another mounting plate to easily accommodate a Power-Pole Micro.

To keep rigging simple, power the 133X with a GPS-enabled, remote-controlled trolling motor like the MotorGuide GPS Xi3 Kayak. The GPS connection is more expensive than a simple tiller drive, but the convenience of push-button control is worth a few extra bucks. I push a button on the remote, and the GPS engaged motor locks my position like a virtual anchor or hit another button and the motor holds my course like autopilot.

Of course, a boat with an electric trolling motor also needs an advanced fish finder and GPS. Coast guard regulations require motorized watercraft to have red and green navigation lights and a white anchor light. Adding electronics requires a second, smaller battery and power panel. To connect fish finder, lights and other accessories to one battery, the Ascend 133X includes a Yak-Power Master Control. I just plugged the accessories into each switch and 12-volt, 10 amp-hour battery into the panel.

So, that leaves the big question: can the Ascend 133X perform as a paddle kayak and a motorboat? Will I be able to take the boat on afternoon jaunts to my local honey hole and use it for weekend expeditions too far to reach with paddle or pedals?

To test the paddle capabilities, I grabbed the Ascend 133X and headed to the Great Bridge Lock Park in Chesapeake, Virginia, for an after-work speckled trout and redfish session. Paddling the tidal creeks and marsh banks of the suburban river is a perfect place to experience the standup fishing capability and paddle-ability of the 133X.

As soon as I pushed away from the boat ramp, I could tell the Ascend 133X favors stability. The long, deep pontoons keep the boat moving straight without a wobble. Once the Ascend 133X gets moving, the weight and hull design keep it trucking.

At the fishing grounds, I simply lifted the seat from the low position into the high position. The Ascend 133X is meant for standup fishing. I could walk to the bow, turn to face the stern and bend down without a wobble.

Adding an electric motor takes the work out of fishing. The Ascend 133X is well balanced with 550 pounds of capacity for batteries and gear. The pontoons keep the boat running straight and when I make a turn, they prevent the boat from sliding sideways.

The Ascend’s Yak-Power master control made it easy to switch on navigation and anchor lights, cockpit lights along with my fish finder and GPS combo. I figure I saved $100 on rigging with the included Yak Power switch panel.

In the end, I got an answer to my questions. Yes, the Ascend 133X is a paddle fishing kayak. Yes, it definitely is ready for motor power and all the accessories. And yes, $1,000 will buy a platform for rigging an ultimate adventure fishing kayak.

Where to buy the Ascend 133X

Where can you find the Ascend 133X available for purchase? Bass Pro and Cabela’s carry the 133X. You will also find Ascend kayaks available at a limited number of smaller local boating stores that carry White River Marine Group brands.

Shop at Bass Pro $1099.99
Shop at Cabela's $1099.99
Engineered for exceptional tracking and stability, the Ascend® 133X Sit-on-Top Kayak with Yak-Power delivers the perfect platform to enjoy the peaceful perfection of the Great Outdoors. The 133X kayak defines angling performance and versatility, with generous storage, comfort, and accessorizing options.
Learn more