Every kayak fisherman wants a boat that is lighter and faster than the next and Jackson Kayak has just announced the next level in smooth speed, their new Cuda LT, a lighter, faster, and more stable thermoformed version of their popular Cuda.

The Cuda LT is exactly the same as the Cuda, but only weighs 60 pounds, compared to the original Cuda’s 74 lbs. Since it’s thermoformed the Cuda LT’s hull is also stiffer, meaning you will feel a little more slide, a more zippy feeling with each paddle stroke and better stability.

Like a Ferrari with a fresh wax, the thermoformed hull also has a high gloss finish to it, instead of the matte finish on other fishing kayaks. Available in Red, Navy, and Lime over white. The Cuda LT has a few more new features than its predecessor, like the new YakAttack gear tracks for and aft and Jackson’s Elite Seat with Thermarest lumbar support.

“The Cuda LT is packed with the key features an angler needs to be successful,” said Jackson Kayak Factory Team member Drew Gregory, in a press release, “but now in this much lighter weight version making it easier to transport and more responsive on the water. Its hull design and length are also just the right shape and size to handle all water types; anglers who can only afford to buy one kayak will definitely want to consider the Cuda LT!“

“I had the chance to paddle the Cuda LT while filming Jim Sammons TV show and I have to say it is a fantastic evolution of an already great platform,” said Jeff Herman, a Jackson pro and ACA certified Kayak instructor, in a press release. “A speed improvement and a stability improvement done in tandem is next to impossible, but Jackson did just that with the Cuda LT. Lighter, faster, and more stable! Amazing.” 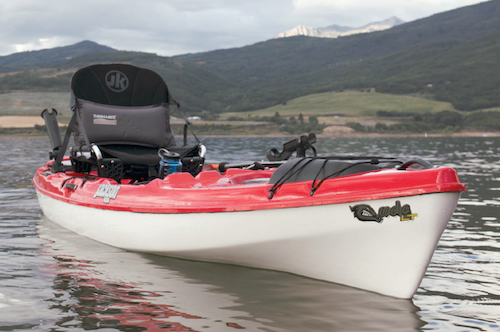 For more information about Jackson Kayak, or their new Cuda LT, check out their website, jacksonkayak.com.