The first thing pro kayak angler Tim Perkins says to me on the phone is, “There’s an art to team fishing, you can’t be selfish.”

I was talking with Perkins to try and get the secrets to his team’s success in the River Bassin’ Tournament Trail (RBTT). Since the trail first allowed teams in its second year, Tim Perkins and fishing partner Lance Coley have been at the top of the leaderboard every single year. If they don’t win first, which is rare, they come very close.

“We’ve competed in 17 National events together,” says Perkins. “We at present have won 12 of the 17 National tournaments. We have 5 second-place finishes. We’ve actually never finished below 2nd place as a team.” 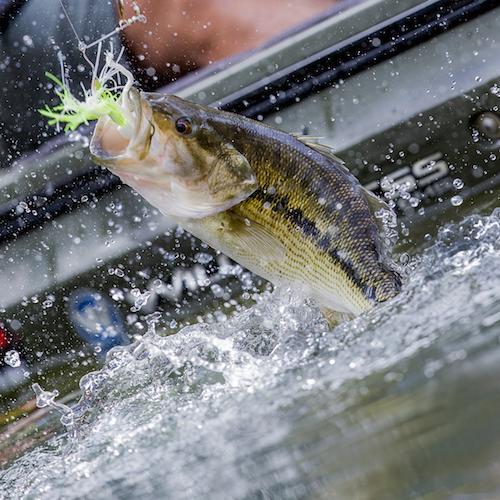 Before competing in the River Bassin Tournament Trail, the pair had never met. When Perkins first heard the trail was going to allow teams to compete, he knew exactly who he wanted to partner up with, Lance Coley, the trail’s first champion. “Mama didn’t raise know fool,” says Perkins. “I saw the champion sitting right there and I said, ‘hey do you want to be partners? The rest is history.”

“My first thought was, ‘Ummm….do I know you?'” says Coley. “I really didn’t know Tim from Adam when he approached me, but I figured if nothing else, it could improve the chances for some sort of payout. Not only did Tim turn out to be a great fishing partner, he also became one of my best friends.”

With a record like that there’s bound to be some perfect mix of talents that allows these two anglers to fish together and perfectly compliment each other’s skills. Like two arms of the same angler that always catches fish. As for tournament strategies, Perkins says, “We like to fish smaller waters if we can, because this whole river trail is about eliminating water. Theres no way you can dissect a river in just three days. SO instead, we try and find smaller waters on a map and dissect it and know without a doubt that I know what Im doing.”

When the team looks for in smaller waters, they’re not looking for smaller sections, or coves within the big section of river, they’re looking to get off the beaten path. “The average joe won’t fish where we fish,” says Perkins. “A beaver won’t even get in there where we fish, but that’s where the fish are.”

While Coley likes to “geek out over maps, hydrology, river geomorphology, and bass biology and speciation,” Perkins spends time hitting the water and finding what tactics are going to work in pre-fishing before the tournament. “Lance prints me out an agenda, gps locations and waters that hes studied on maps,” says Perkins. “I’m there three days ahead of time to prefish, testing out these spots.” 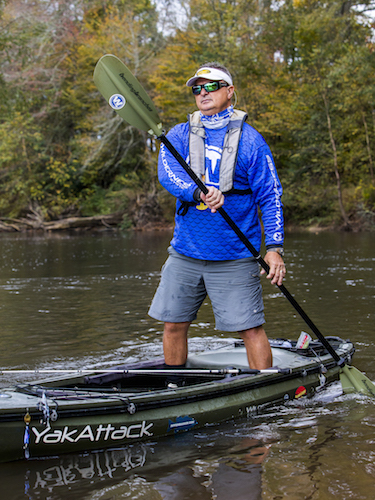 His go-to pattern to start pre-fishing, and to winning tournaments, is a spinnerbait. “I don’t care where youre at, you can take a ¼ spinnerbait in a Houdini color and you can catch a fish, no matter where you are in the country,” says Perkins. “I throw a black spinnerbait and I caught 5 and 6 lbs largemouth out of a river that wasn’t wider than two kayaks nose to nose. I like to have at least one brand new spinnerbait in my box every tournament.”

Coley also uses local knowledge to pinpoint which spots are working at a certain time of year, which helps him supplement his online scouting. “It’s impossible to know everything,” he says. “I have also been blessed with the friendship of many knowledgeable fishermen scattered around the eastern U.S. that are almost always willing to help me out.”

Sitting At The Top Of The Standings

Lance says the best part of being at the top of the leaderboard so often is the satisfaction of all the hard work of researching and scouting paying off. “To place high in the standings so consistently, in different parts of the country, in different conditions, I only have one word for the feeling that comes with that: BLESSED!” he says. 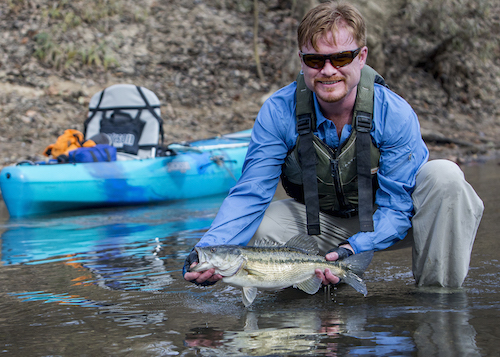 The winnings haven’t soured the pair’s friendship however, and neither has the glory of being called champion so often. “Lance and I are such great friends,” says Perkins. “No matter who wins, we split everything right down the middle, no matter what.” Even when only one angler is allowed to be named Angler Of The Year, the friends still have each other’s backs. “Last year Lance got Angler of the Year, we won team of the year, I was runner up for AOY,” says Perkins. “It is an awesome feeling to know your at the top of the game, but it runs deeper for me. I’ve always felt I must represent the guys that were bigger than life to me, that taught me to fish, like my grandfather, John D Blanton, who was the greatest river fisherman I ever knew.”

How To Become A River Bassin Expert

Coley says you can’t go at it alone if you want to start winning tournaments. “Make friends in the fishing community and learn from them,” he says. “Be humble and open-minded. Learn from them how, when, and where to fish, learn how to do it safely, and then don’t be too proud or have too much bravado to actually do so.” 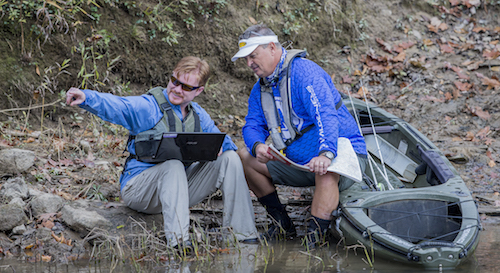 Another thing to think about he says, even with all of the technology available, is to keep things as simple as possible when fishing rivers or river tournaments. “Every tournament I’ve won I’ve done so out of a $700 kayak with about 3 rods on board, and about 6 or 8 confidence lures,” he says. “I’m of the opinion that bells and whistles and endless options tend to confuse and hinder more than they help.” 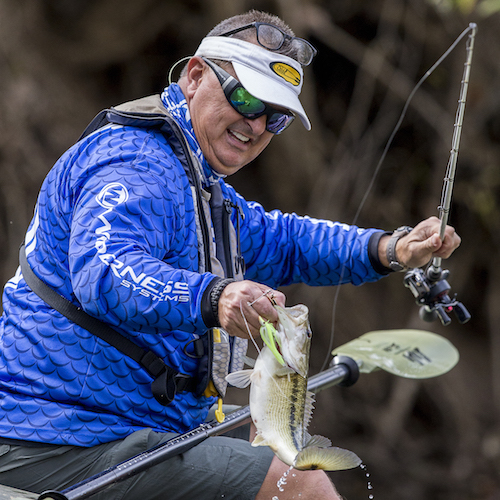 Where The Team Is Headed Next

While chasing National titles has been fun, and successful, the team seems to be slowing down and starting to focus on other aspects of fishing and of life. “I’m a bit of a purist when it comes to river fishing for bass, so I don’t see it going much beyond the RiverBassin trail, or perhaps similar river-based competitions,” says Coley. “I’m not saying I won’t be competing at all, but I’m looking to expend less energy chasing titles in 2016, and hoping to spend more energy doing more river exploring, chasing fish I’d normally avoid on tournament day like the various species of Redeye Bass, and giving back to the sport and the rivers that have given me so much.” 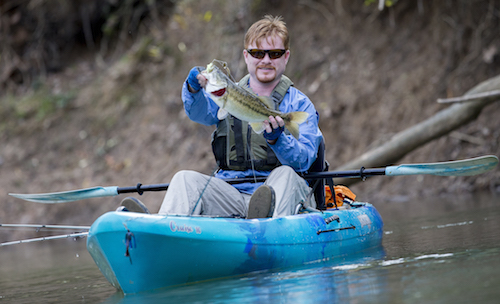 Perkins agrees, saying, “We’ve become much more than a team, we’re best friends. I do see spending a little less time chasing National titles and more time taking our achievements and promoting river fishing to the next generation.”

The pair says they also have some “innovative surprises for the kayak industry,” that they hope to reveal soon, including a series of custom spinnerbaits with the lure company Premier League Lures, for which Perkins is a pro staffer. “I had the opportunity to design the River series for Premier League Lures in 2011,” says Perkins, “and we’re coming out with a box of our baits with them.” 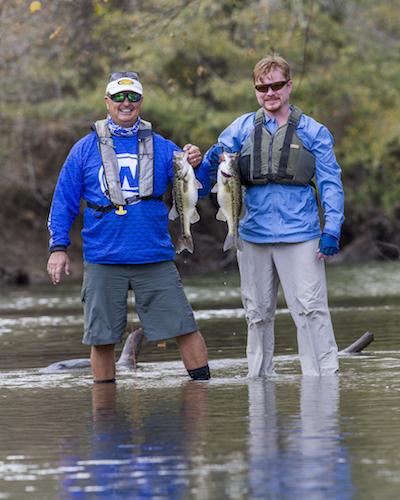 What kind of baits should you expect? Spinnerbaits. And lots of them. “85% of the time we’re thowring a spinnerbait,” says Perkins, “and I owe Drew Haerer the tip to put a craw on a black spinnerbait, which changed everything. Now if its overcast, I throw black. I’ve won more money on that than anything else in my entire box. Especially on a full moon.”

While the pair agrees that they’re ready to start slowing down on chasing titles, Perkins has some reservations. “Who knows about the two of us,” he says, “We have the same calling to tame rivers and I don’t see that changing. Now to what capacity we’ll have to see.” Much of the redirection of the pair’s attentions will be towards promoting the next generations of river fishermen.” I personally want to promote my 9 yr old twins on the RB trail,” says Perkins. “They’ve both fished one tournament and each won their division.” 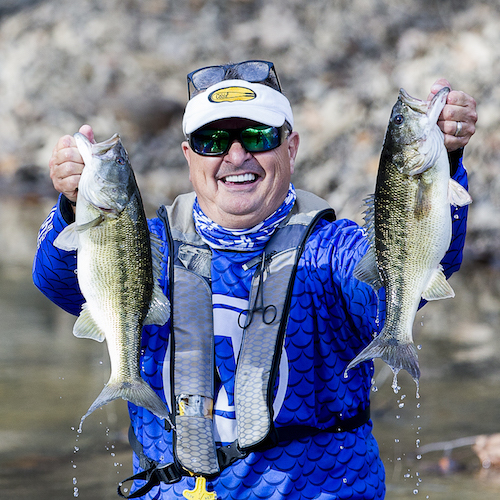 You Can Become The New River Bassin Champion

“I had the Awesome opportunity to start fishing with a river legend, my grandfather, at an early age,” says Perkins. “At the ripe age of 10 I learned so many lessons by watching a master at work.” Spending time with other great anglers can teach you more than you’ll ever learn by yourself, so finding a group of experienced anglers can be a great way to make leaps and bounds in your kayak fishing skill set.

“I think that also motivated me to raise the bar for my own skills,” Perkins says. The more you surround yourself with fishing, the more likely you are to want to excel and will work that much harder to achieving your goals, either in fishing or in life. You have a chance at becoming the next River Bassin Tournament Trail Champion. Maybe start by tying on a black spinnerbait.

10 Expert Rigging Skills To Level Up Your Game

15 Expert Fishing Skills To Level Up Your Game