Have you ever have one of those days? A bad day where nothing goes as planned, or maybe a day so good that you judge other fishing trips against its memory. Well, I had one of those days when I got lucky and had a twofer while kayak fishing the Snake River. This memorable trip turned around in a hurry thanks to a swarm of Mormon crickets.

One of many reasons I kayak fish is the ability to launch just about anywhere and access great fishing areas without doing much travelling. On this particular day I needed to be home by noon, so I planned to search out some channel catfish in the Brownlee Reservoir near Huntington, Oregon. I launched my kayak at the mouth of the Burnt River and quickly baited up with crappie that I brought as fresh cut bait. This area is usually a very reliable spot to find some nice cats and I had high expectations for the day.

I anchored in the confluence of the rivers and cast out two rods, one with crappie and the other with more crappie. Expectation turned to boredom, then to frustration as I recast with fresh bait every 15–20 minutes. With not a sign of life for four hours and well on my way to an epic skunking, I knew I needed to make a change.

I called a coworker who lived nearby for advice. He relayed that the shield-backed katydids known as Mormon crickets (Anabrus simplex) were migrating up the Idaho side of the reservoir and anglers were hammering the kitties using them as bait. I had never seen a live specimen of this cyclical insect before and had no experience using them as bait. Nonetheless, I pulled anchor and pedalled my Hobie Outback across the current toward the Gem State.

Mormon crickets derived their common name in the mid-1800s after invading the crops of Mormon settlers in the Salt Lake valley. They are considered a pest and can devastate crops and orchards in a short time when swarming. When migrating in large numbers, they will even cause hazardous road conditions by making driving surfaces as slick as ice. These swarms can be found throughout the West. Idaho regularly sees swarms in certain areas, letting anglers easily collect them for bait. Frozen crickets can also be used with success, and many sporting goods shops in Western Idaho and Eastern Oregon stock them in the freezers.

As I neared shore I noticed lots of debris in the water with fish crashing bait on the surface. A wide open topwater bite? The flotsam turned out to be rafts of Mormon crickets everywhere. They ranged from two to three inches long and were the creepiest critters I’ve ever come across while on the water. Most were still alive and actually started to board ship. Within minutes my kayak gained a dozen new passengers.

The constant topwater action helped me to summon the courage to grab one of these aliens and thread it on a hook. I cast out the angry cricket on a small jig head under a bobber and set the rod in my Stealth QR1 rod holder. I grabbed my second rod to bait up, but the first was already doubled over and the kayak was doing a hard left turn. I was finally hooked up! A quick battle on light gear put a smile on my face and also lifted my hopes for the day.

Channel Catfish Have a Taste for Crickets

Cricket contestant number two was crawling on my leg, so he got a piercing and a bath. The floater didn’t have time to settle from the cast before it shot under—game on! I abandoned the thought of working two poles as the action did not let up.

Armies of Mormon crickets could be seen marching upriver along the shore. I found a cricket-covered rock jutting out into the river that had turned into a lemming leap. Catfish surrounded the rock, picking off jumpers and even grabbing the ones that got too close to the water’s edge. For the next six hours I never went more than one cast without fighting a fish. I called my wife and explained that I would accept any punishment for missing my appointment, but a guy doesn’t get a chance like this very often.

All the tackle I needed for the day was a 1/16-ounce naked steelhead jig head with a stout hook tied directly to the main line. It was so simple and deadly effective that I even put the floater away. The cats would hit the cricket immediately upon splash down, or as the rig slowly sank within the top foot or two. An unweighted hook would also have worked, and I suspect a fly fisherman could have had a day for the record books. I constantly retied after several fish to be sure the cat’s sandpaper teeth wouldn’t compromise the four-pound test line on my crappie rod.

Hammer the Cats with Mormon Crickets

With some luck and local intel, what started off as a fishing fail turn in to one of those days that I’ll never forget. I’m already counting down the years until the next Mormon cricket invasion. 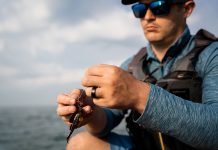 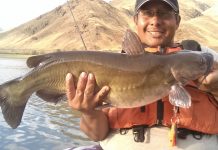 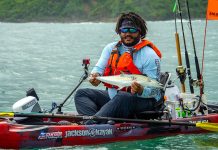 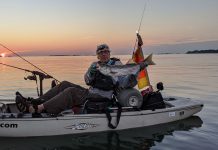