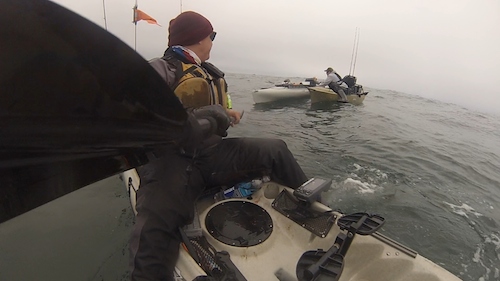 He struggled with righting his kayak. I could tell that he was fatigued at that point. I radioed for anyone close to come and assist. Another guy came to our aid and positioned himself next to the new guy’s kayak; who was still struggling to get back in. I moved in and we sandwiched his kayak with ours and kept his stable. He was able to climb in over the stern.
Once on the kayak he was laying belly first over the length of it. He was clearly exhausted and he started vomiting. We did our best to comfort him and keep him calm. We urged him to take a few minutes to catch his breath before trying to get back in his seat. Getting him back in the seat of his 2015 Revo 13 proved to be difficult. He also had a custom deck mount for his fish finder and rod holder that was adding to his struggle to get in the seat.
Eventually, we were able to get him to climb over the seat so we could get him sitting down. We kept him sandwiched for a while longer and let him rest. When he appeared to be stable enough to pedal on his own we let go. I asked him if he wanted to go back to the launch or continue fishing. It was at that moment that he leaned over to vomit again. That’s when he fell in again. He was too exhausted to get himself in the kayak this time and he needed to be pulled back into his boat. The guy in the PA12 held onto him and his kayak and I swung around the other side of the PA12 and held on to the rail to help prevent them both from going over.
I made the call to escort him back to the launch after the last spill. He was tired, wet, and cold. He didn’t have the neck gasket cinched down and he ended up with some water in the suit. He wasn’t wearing the proper base layers. He was wearing a T shirt and pajama pants. He was quickly losing core body temp so I made sure to keep him moving as we made the pedal back toward the launch. I was nervous that he’d fall in again. He was shaking pretty bad and not speaking very clearly. A few times he was having a hard time following me; he was wandering in the wrong direction. I had to work to keep him focused on getting back to shore.
Once back at the launch, he was able to walk on his own and get to his truck. I took care of getting his kayak ready to load and I noticed it was full of water. I suspect that he took on some water through the rudder lines while trying to flip his kayak. This may have contributed to him flipping several times.
I learned a lot from that experience. I’m not sure I want to be responsible for someone’s life in the event of something like that happening again. That split-second decision to risk your own life to save another’s is not a situation I want to experience again. I realize in this sport that I take that risk.
I urge people to dress appropriately and spend a lot of time practicing getting back in their kayaks. Practicing buddy rescue is also a good idea. I am going to organize a kayak safety day soon. I think it will be a good way to show people how to perform buddy/self rescue.
Kayakers Perform Buddy Rescue

The scary truth about the increase in paddlesports related fatalities