Without a doubt, advances in kayak rigging are driven by competitive bass anglers. Pro anglers hit the lake looking to get a leg up on their fellow competitors. To meet this need, anglers are rigging their kayaks with the highest level of electronics, accessories and propulsion. We spoke to custom boat designer Romel “The Wizard” Labrador for his state of the art on kayak rigging for lake fishing.

Interesting may be the understatement of the century, today’s competitive anglers are looking for every advantage. “If a boat angler can have it, a kayak angler wants it,” Labrador laughs.

Labrador, an electronics specialist who installs communication and lighting systems in safety vehicles, is known as the Wizard for customizing kayaks with carbon fiber panels, LED lighting, flush-mounted electronics, custom rod holders and personalized engraving. We asked Labrador to share some of the latest rigging trends at the forefront of the sport.

At the top of the list, Labrador says electric motors are dominating the latest generation of custom rides.

To meet the needs of customizing a kayak, Labrador looks for a blank canvas with plenty of flat, open space. His personal boat is a NuCanoe Pursuit. Pre-rigged gear tracks that accept accessories from a variety of manufacturers make it easier to add custom touches. Also, the Pursuit has a 500-pound capacity to accommodate motors, gear, tackle and batteries.

But adding all the bells and whistles requires a sturdy boat. “Look for thick plastic, extra support in the bow and stern, and gusseted areas for more strength,” Labrador says. Still, he likes a boat to paddle well when he enters water too shallow for the motor.

To search an area and find the fish, tournament anglers demand the best electronics. Labrador laughs, “I remember when a seven-inch display was cool.” Now anglers are looking for multiple 10- and 12-inch screens to run sonar and GPS on separate units.

Labrador designs his custom installs to keep weigh centered and low. “I weigh the boat at the bow and stern to determine the balance.” He also aims for a low center of gravity, which improves stability and performance. “Anything mounted above the gunwales will act like a pendulum,” he says.

To achieve this, he creates carbon-fiber panels to flush mount the display unit. He can also integrate sun shields to keep glare off the screens. “Everything is rock solid,” he says.

Tournament anglers launch in the dark, so Labrador integrates LED navigation and deck lights. “I look for lights that run cool,” he says. Before permanently installing the lights, he tests the location to make sure the beam will shine down without blinding the angler.

[ See also: The Best Battery Setup For Your Fishing Kayak ]

Another tip: Labrador encourages anglers to use the correct size wire. “I use 8-gauge wire, don’t go over 6-gauge,” he instructs, pointing to online charts indicating the best wire for the current and running length. 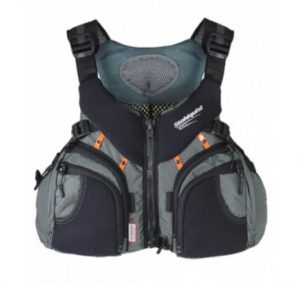 Most tournaments require anglers to wear a PFD, so Labrador chooses the lightweight and slim Stohlquist Keeper. “It has really soft foam that forms to fit,” Labrador says. He carries his wallet, keys and phone along with line clippers and river knife. “The Keeper has hand-warmer pockets, too,” he adds.

Since motorized kayaks were approved in most tournaments, Labrador has seen a drag race among his clients. While several kayak companies offer factory-rigged motorized boats, Labrador says many anglers prefer to add an electric motor to their favorite paddle kayak. Mounting a motor to the bow or stern allows the angler to maintain deck space and paddling performance.

Labrador says Minn Kota’s AutoPilot trolling motor is all the rage. The GPS integrated motor can be operated with a remote control. “Spot Lock allows me to hold the kayak in one place with the push of a button.”

Labrador can also replay his last track. “I use replay feature to work a grass line or drop off,” he says. Labrador will map the edge of the structure once, then hit replay and the motor will take the kayak back along the same path. He says, “I can pick a spot apart and use different technique on each pass.”

On his personal boat, Labrador has been using the Bixpy J-1 motor. “It’s simple connection and remote control make it easy to install,” he explains. The Wizard has even rigged a custom steering system controlled with a machined aluminum knob beside the seat. “I used a high-torque digital servo to give the motor 175 degrees of steering throw.”

Plano 3600 trays hold Labrador’s tackle. He also installs tackle trays under the seat to hold the lures he uses most often.

To hold his kayak in shallow water, Labrador uses a Power-Pole Micro. He says it is important to mount the base on a sturdy spot. “The Micro can lift a kayak out of the water,” he laughs.

Other Rigging Tips for Lake Fishing

While it might seem like a motorized kayak allows anglers to pack the kayak with accessories and gear, Labrador is obsessive about saving weight. In addition to balancing the kayak, extra weight will cut speed, torque and battery life. Labrador suggests running an electric motor at 80 percent capacity to preserve battery life. “At 80 percent the kayak isn’t going much slower, but the power savings are significant,” he says.

Tournament anglers have to quickly land, measure, photo and release a fish. Many anglers have lost a tournament when a photo was disqualified, or a trophy fish escaped before it was measured. Labrador keeps his measuring board in easy reach and maintains open space on the deck to lay the board and measure the fish.

Labrador designs horizontal rod holders to stage his rods while he’s fishing. “The system holds my paddle and two rods I am using most,” he says. The rods are easy to reach whether Labrador is standing or seated and the holders keep lines and lures from tangling.

This boat is rigged for the future of lake fishing. | Feature photo: Romel Labrador