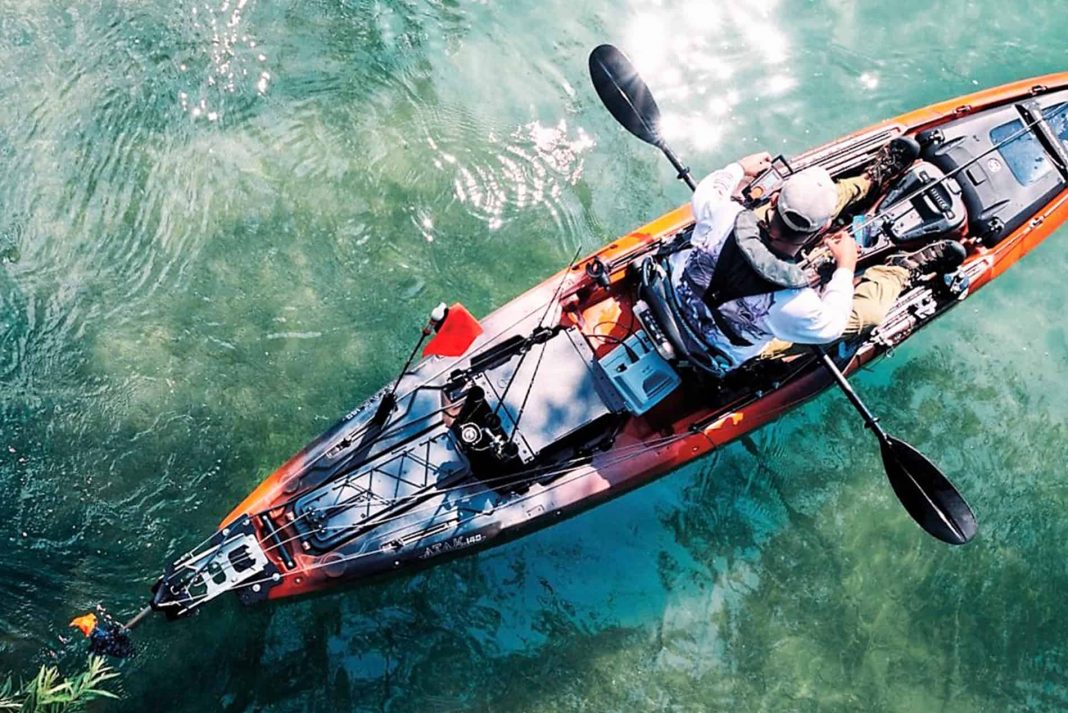 Demo days allow kayak anglers to get some seat time in a variety of kayaks to tell which one “feels right”. The experience hopefully leads them to purchase the right kayak for their needs.

The feel of stability ranks as a high priority. Sales personnel discussions on “primary stability” and “secondary stability” sometimes float over the head of the buyer. They just want to know that they don’t feel like they are going to tip over.

The same discussions on kayak speed or efficiency can be lost on buyers, but they can feel if a kayak “paddles well” or has a quick response to hitting the pedals hard from fully stopped. Purchasing a fishing kayak is a subjective experience, influenced by marketing, price point, color, features and the experience of feeling speed and stability of each kayak at a demo day. I would like to offer a few objective measures that can help with one part of the decision.

Bring a tape measure to the demo day. Take measurements of the position of the seat relative to the length of the entire kayak. Take note of the percentage of the kayak behind the seat and compare to other kayaks you are looking at. When considering seating, most folks just sit on it, wonder if it’s comfortable enough to spend 10 or more hours on it, or want to know it’s highest adjustable position for sight fishing. But where the seat is positioned relative to the length of the boat is hugely important relative to how long you stay on the water. It has a big impact on the question “does the boat paddle well?” 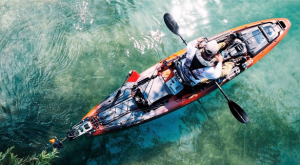 Here’s the reason why. When a seat is too far back, the stern dips low, the bow pops up and the paddling gets tough. So does the pedaling. And if you’re using an electric motor like the Torqeedo Ultralight I sell, the battery will be drained faster.

I know this to be true from my testing of a variety of kayaks, and keeping track of each kayaks “seat ratio”. I had a hunch that seat position, and therefore angler weight had a big impact on the kayak’s top speed with the motor. Truth be told, it was less of a hunch and more of learning from bass anglers who fish electric-only waters. They customize flat bottom jon boats to attain the fastest speeds on tournament day. The concept is simple: move weight forward so the boat rides flat under power and your speed and range grows. It’s easily measurable on a Torqeedo throttle that provides your speed and Watt draw (used to calculate the remaining range). The speed and range data I have collected on a variety of kayaks make this a more objective study.

In the chart below, I have the three most important factors on efficient propulsion: Seat ratio, weight and length. Hull design is a factor as well, but for the sake of making new discoveries based on objective measures on a broad base of fishing kayak models, I stuck with recording these three.

If you focus on seat ratio alone, the trend may not be as apparent. For instance, there’s a 45% at top and a 42% at the bottom of the speed ranking. But if you look at the kayak weight of the 42% seat ratio kayak at the bottom, it explains that the weight of that kayak was likely the primary limiting factor. The only kayak with a sub-average seat ratio in the top half of the speed rankings had the advantage of the lightest hull tested at 72 lbs. The longest kayak also had the best seat ratio, and not surprisingly had the best speed in the data set at 5.7 mph.

So what’s the ideal set up? A long, lightweight kayak with the seat at least 45% of the length of the kayak behind the seat. But it’s possible that none of these kayaks have actually found the “sweet spot” of seating. Here’s why, and here’s what is specifically overlooked when fishing kayaks are designed.

Kayak anglers bring a lot of stuff with them. To quantify exactly how much, I conducted a poll. In order to get people to accurately capture all the weight of their gear, I weighed all of mine. Then I weighed myself wearing all the stuff I wear when kayak fishing. I ended up adding 434.9 lbs of weight to the kayak. My wife thought that I was crazy when she found me placing depth finder batteries, Power Pole motor, a YakAttack BlackPak full of tackle, my usual stash of food and drink, then myself on her bathroom scale. It wasn’t the first time she had the thought.

Subtract my own weight from that tally, and you’re left with over 200 lbs of gear. Guess where most of it goes. If you kayak fish already, you know that the answer is “behind you”. The Black Pak goes in the rear well. The rods go in assorted holders behind you. The Power Pole motor is usually on the stern, never on the bow. I could go on, but you get the idea. The result is a boat that rides high in the front and low in the back – exactly the type of efficiency that my testing has proved to be inefficient. My testing of the electric motors on 12 different kayaks was completed without gear, so the disparity between boats that perform well and those that are less efficient is actually a much wider gap once gear is added. 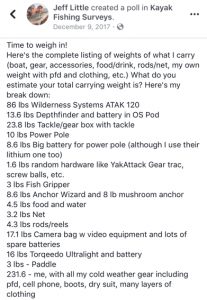 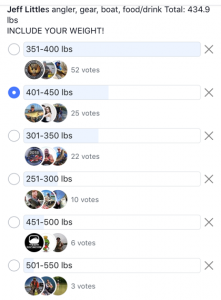 The negative consequences of a boat that ride “bow up – stern down” go beyond inefficient motor propulsion. Because the electric motors are operating within the displacement range of speed, not planing speeds, the same inefficiencies seen in motorization are echoed in paddle and pedal propulsion. Simply stated, bow up, stern down makes for tough paddling, arduous pedaling and a battery charge that doesn’t last as long.

Incidentally, hull weight matters too. Kayak manufacturers strive to keep hull weight low, while maintaining the width and volume required for fishing kayak stability. One way they do so is by keeping the folds, creases, channels, hull based handles and other textured effects on the hull to a minimum. If the hull features predominately flat surfaces running in straight lines, it just requires less plastic to mold. The saying “the shortest distance between two points is a straight line” applies to two and three dimensional designs like kayak hulls. The lightest kayaks are designed with this in mind. It’s tempting to build every cup holder, rod holder, tackle compartment and water channeling groove into the hull because it looks cool and functions well with your gear, but it makes for a heavy kayak.

So getting from point A to point B requires more energy input if your seating ratio is sub-par. What about once you get there? You just paddled to a spot that you identified as a likely place for a fish to hang out. Let’s make an assumption of your being in a kayak with a low seat ratio, say 0.34, and poor efficiency for this example. You stopped moving forward, so the handicap ends, right? Wrong. The weight on the back carries forward. With a kayak that has a pronounced keel, that’s probably not too bad. But if it’s a kayak designed with a heavy rocker (rounded up at both sides), the heavy stern will swing toward the target that you just paddled so hard to reach. You made a cast, the kayak does a 180 slide. Within a few seconds you are looking over your shoulder wondering if you can set a hook in an awkwardly contorted yoga pose from your super comfortable kayak seat.

Most fishing kayaks aren’t that rockered, so that’s not a huge deal with most models. But how many of us fish in the wind? How frustrating a windy day can be! What makes it even more frustrating is having a bow that catches the wind because it’s higher than the stern. It’s maddening! You mean to focus on your presentation, but you’re either constantly one handing the paddle, pumping the pedals while twisting the rudder knob or fussing with the motor, just to keep the boat pointed in the direction of where you just made a cast. 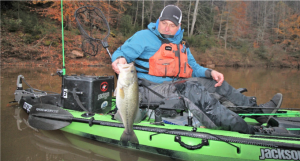 What happens when you reverse that scenario? Bow down, stern up and catching the wind? Yes please! That means that you’ll not get caught sideways and pushed off point by the wind. The wind will help you stay pointed at the spot you are fishing, not turn your back to it.

So why have all the kayaks been designed with a large voluminous bow? I believe that the idea of having a storage space up front for dry bags has been inherited by touring and recreational kayak design. It also helps with maintaining a “dry ride” for kayak anglers. Speaking personally, I would be just as happy to keep my relatively light weigh dry bag in a stern compartment. I also think that a “dry ride” is over rated. Of course my roots are at least partially in whitewater, where “a dry ride” is synonymous with having chosen a boring float trip. If you want to stay dry, get a dry suit.

Another aspect of having too much bow out in front of you is fishing-specific. Most kayak bass anglers can deal with a bulldogging bass crossing underneath the mid ship area to the other side. But once you start to tangle with larger species, being able to cross your rod tip across the bow from one side to the other is a nice option. Its why many kayak anglers choose longer rods. Why not make that easier and shorten the bow, while lengthening section of the kayak behind the angler?

Maybe kayak manufacturers believe that kayak anglers value the front storage. My experience has been that if I can’t reach it from my seat, it’s probably dead weight. Many fishing kayak manufacturers have created space for tackle under the seat, on the seat back, on the rails within arm’s reach, in trays and hatches between the anglers legs, and other spots within arm’s reach. More of that is needed.

So why the value placed on bow storage? I honestly don’t know. Here’s a poll that shows how other kayak anglers view and value bow storage. 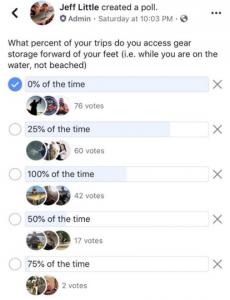 A kayak with limited bow storage could make room for a complete shift of the seating area forward that the previous points made have called for. It’s not just the seat that needs to move forward. The frontmost portion of the foot well must also travel forward to match the new seating position. Otherwise, we’ll all be paddling, pedaling and motoring around with our knees up at our ears.

At the beginning of this, I listed kayaks anonymously with their top end speed and the efficiency related attributes of seat ratio, length and weight. I didn’t want to bias the reader’s though process by revealing the brands and models. If you really wanted to know, you could look up the specifications of several kayaks and figure them out. But a hard look at these attributes when looking to purchase or design a kayak might be more helpful than a revealed ranking of what already exists in the market. I hope that it leads to further innovation, people buying better-designed fishing kayaks, better speeds, improved range and better fishability in tough conditions like wind and current. 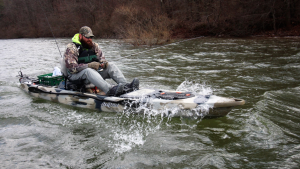 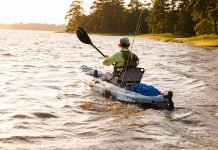