The famous Mosquito Lagoon did not disappoint the anglers fishing the Kayak Fishing ClassicS 2016 Lagoon Classic. True to the lagoons fame, the redfish and trout bite was on and the big girls came out to play.  First time lagoon anglers were shocked by the size of the trout and redfish that have a variety of nicknames such as monsters, stud reds, gator trout, troutzilla and on and on. In short, they were there and tricky to establish a friendship with. This is great news in light of what has and still is going on in the system of lagoons and rivers.

Using Tech To Win It All

Anglers were fishing for their best 2 redfish & trout, scored by iAngler Tournament which automatically culls out the smaller catches and keeps our electronic leader board up to date. The kayak anglers launched at 5:45 am ET and headed to their favorite places to hunt fish on a beautiful, perfect day. The weather remained that way throughout the day with a slight breeze for some comfort in the 90 plus degree afternoon. Weigh in was at 2:30 pm at the famous Goodrich Seafood & Oyster House in Oak Hill, Florida who has hosted the entire  East Coast Division series this year.

The leader board began to light up almost as soon as the launch kayaks order was given. It was looking like an amazing day was on the horizon as I verified the catches that just kept coming in…all day in fact. Usually the bite will be on in the morning or later in the day however, it did not stop or slow. With building fish activity the scores just kept mounting and lead kept changing hands.

Many anglers reported brawls with monster size reds in the upper 30” to upper 40” ranges and believe me they are powerful as the straightened out hook and broken leader count soared  to new heights. The trout engaged a bit later and their numbers were impressive as well with the larger ones playing later in the day or at least landed later in the day. 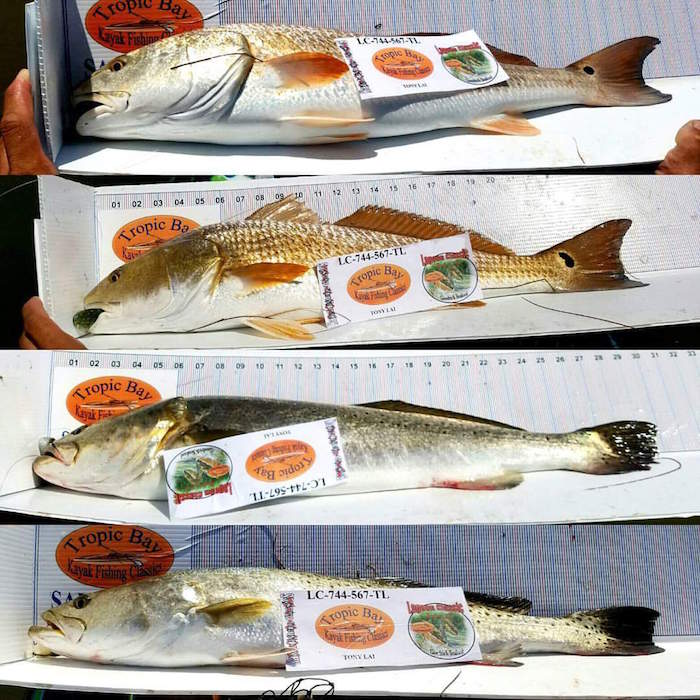 Photo: This is what it takes to win the Kayak Fishing ClassicS Lagoon Classic–big fish.

The water was in good shape and required a light leader to fool the brutes in shallow water with bright sunshine, using a soft plastic bait or hard plastic lure. The results were devastating to dreams of grandeur and fame as echoes of disappointment could be heard from around the lagoon. I knew exactly what was going on having been a member of that club a time or two.  Some of the normally successful anglers were all but quiet for most of the day…game plan is everything and sometimes you’re just not wear the fish are.

Tony Lai, an angler from the Gulf Coast Division had never fished the Mosquito Lagoon before this event. He has been a man on fire this year, not only in the KFCTS Tournaments but in others as well. He made what proved to be a great game plane and chose the correct combination of lures and baits to fool some very nice residence of the lagoon.

And The Winners Are…

1st Place: Tony Lai 2 redfish & 2 trout scored a total of 109.9” for his overall win in the Lagoon Classic. Tony used a combination of DOA Lures 4” shad rigged weedless and FINS 15 lb braid that he had won in a previous KFCTS tournament. He fished the shallow grassy places with some water flow for most of the day…I know where he was but can’t say…sorry. Other anglers in the tournament watched Tony put together a monster catch, fish after fish but could not beat him. Congratulations from DOA Lures and FINS Braid to you Tony and from all your competitors in the event. It was awesome to watch.

2nd Place: Darren Frost 2 redfish & 2 trout scored a total of 104.2” and put on a good show. He tried to catch Tony as the two top anglers watched each other catch fish. The KFC iAngler Leader Board was turned off around 11 am and everyone knew it was going to be close…Darren didn’t disappoint. A 104.2” is a first place catch most of the time but it proved to be the solid 2nd place on record. Congratulations From all of us at the ClassicS Darren and from all of our sponsors. Thanks for the great show!

3rd Place: Derek Engle 2 redfish & 2 trout scored a total of 100.9” and was definitely in the hunt as he put on a fishing clinic. The Top 3 Anglers went back and forth all day with others jumping into the fray only to get nosed out fish after fish. Congrats Derek, you did an awesome job.

4th Place was earned by Marvin Engle with 2 redfish & 2 trout for a total of 80” Congratulations on a job well done form all of our sponsors.

5th place was earned by local and friend Capt. Pepi Vidal with his 4 fish total of 77” Pepi can tell you how the Goon as many call the Mosquito Lagoon, can be. He is no stranger to the winner’s podium or catching huge redfish. Congratulations Pepi and we’ll see you at the nationals.

The Bending Branches Big Ole Fish Award was captured by Connor Jones who caught a beautiful redfish that measured 33”…now that’s a stud. Congratulations Connor from Bending Branches. We know you will enjoy that awesome paddle.

We thank all of the anglers for fishing the Lagoon Classic, Goodrich Seafood & Oyster House and all of our amazing sponsors who get as excited as the anglers do….see you at the next one.