The 2017 Kayak Bass Fishing National Championship was held March 31-April 1 on Kentucky Lake in Paris, Tennessee. The two day tournament saw more than 300 anglers competing for a chance to win $35,000.

Learning from a rough experience in the KBF Open last year at Kentucky Lake, Kurt learned to make adjustments. “Last years Open, we pre-fished like champions. In one cove we had 100” of fish in an hour, with just five fish. We went back next day for the tournament and there wasn’t a single fish in there. I learned from that tournament to make adjustments.” “Always have a plan B.”

This year, Kurt approached the fish with adjustments in mind. “On day one, when I first got to my spot, I caught them on pretty much everything. But I started seeing what the bigger fish were relating to, and how they were relating to the structure and current breaks. For me it was all about the currents. The wind was super strong causing a lot of current where I was at. And I found that some of the bigger bass were hanging out by the stake beds, and they were using them as a current break. 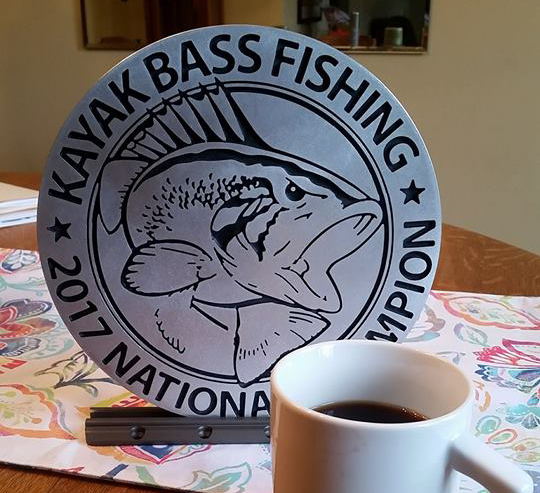 “I ended up fishing a little Texas rigged plastic worm that I could drag through the stake beds and illicit some great strikes this was. Im a huge Texas rig fan. I got lucky that the fish were biting on my go-to.”

On the second day, the weather changed and so did Kurt’s approach. “Day two was totally different that day one. The wind changed direction and the water temperature cooled overnight almost six degrees where I was fishing.

“And I had to switch up everything I was doing because the fish weren’t relating to the stake beds. They had moved out to a ledge, and I caught four fish from one spot and my fifth fish off of the stake beds. The weather did a 180.”

While every angler would love to win the KBF National Championship, this win was extra special for Kurt. “This is life changing,” he said.

“I personally was at a cross roads coming in the tournament. I sold a business over a year ago and spent the last year not really having to work a ‘job.’ I just really decided to chase the tournament scene half way through last year to get the qualifications to go to nationals. I really hit it hard all winter.

“Leading up to this event my wife and I were talking about me getting a job again when I got back from the tournament. I thought, ‘The kayak fishing scene is exploding, if I can just do well enough in this one event.’ Sometimes your prayers are just answered.”

Kurt is a member of the Buckeye Kayak Fishing Trail, a Hobie pro-staffer and is sponsored by Strictly Sail Inc. in Cincinnati, Ohio. “I would not be at Kentucky lake doing this without the sponsorship and support from Strictly Sail. Those guys have made all of this possible to me. They took a chance on me years ago and I wouldn’t even tournament fish if it wasn’t for them.”

As for what this tournament means for kayak fishing as a whole, Kurt said “What Chad Hoover (and all the staff at KBF) is doing with this one event is literally going to change the whole perspective on kayak fishing all the way down the line.

“This is way bigger than me. This sport is growing and is going to be huge. I see nothing but massive potential for this sport.”

Congratulations to Kurt. You deserve the win. Now don’t spend it all in one place.