Anglers are always trying to improve their game and learn new skills, but part of improving as a fisherman is learning where not to go fishing. This year I achieved a degree of enlightenment; I discovered several new fishing holes. And one place, thankfully, where I will never return. Does that mean I learned my lesson?

[ See also: Fishing For A Purpose Beyond Comparison ]

Where Not to Go Kayak Fishing

Last summer, while scouring satellite images, I discovered a place that checked all the boxes for monster pike. First, I found a series of ponds buried deep in a large section of state game land. The isolated holes offered limited access, even by foot. The lowest pond looked big enough to support a pack of water wolves. Reaching it required three portages across small scrubby berms.

On a quest to find a magical pike pond, I decided to explore the place. When I arrived at the hopeful honey hole, the only indication of public access was a rusted, BB-pinged sign: “Clean Your Watercraft of Aquatic Vegetation.” There were other signs, which I ignored. Another clue: I spotted pieces of a broken paddle buried in the weeds. I followed an overgrown trail of rotting boards half sunken in the mud.

[ Read more: When It’s Okay To Bend The Rules To Bend Your Rod ]

At the end of the trail, I shoved my kayak into a substance that gleamed like it was wet. That’s when I remembered a middle school science lesson where I learned about three states of matter: solid, liquid and gas. On this trip, I discovered a new state: gravy.

To launch, I first had to step into the gelatinous, black, stinky substance. I figured I would never see my wading shoes again. After submerging my foot just above the ankle, I was surprised to hit firm bottom.

Satisfied that I wasn’t going to end up slogging through the mud, I climbed aboard and paddled towards open water. Each stroke lifted and plopped a great mass of black gravy across my shins. To make headway, I had to paddle fast and keep up my momentum. Before long, my clothes, legs, and kayak looked like I tried to make a kale smoothie without securing the blender lid.

When I reached a narrow channel in the goo, paddling got worse. I figure the break in vegetation was a sign other anglers had forged a path, maybe the owner of the broken paddle I had seen in the grass.

I spooned great globs of dark pungent pudding across my legs and fishing gear while using my weight to scootch forward an inch or two at a time. When I finally reached glorious open water, movement on the water’s surface caught my eye. I worked to catch my breath and cast a small weedless rubber worm.

Reaching the Point of No Return

The good news was the pond is full of fish. The bad news was the pond is loaded with carp. The giant goldfish are slimy, stinky and hard to hook with pickerel gear. As if surprised to see an angler stupid enough to explore their pond, huge herds of reckless carp panicked across the pond breaking water in every direction.

I didn’t give up hope.

This was just the first pond, my destination was several portages away. I paddled along the shore looking for a place to land. When I spotted an animal path through the undergrowth, I paddled hard to slide my kayak over the gravy. Stopping short, I eased my feet over the side. This time I sank to my upper thigh. I could barely wiggle out of the mud and flop back into the boat.

[ See also: 3 Easy Moves To Get Through The Marsh Muck And On The Fish ]

I was glad no one was around as I began to curse. A sailor would have blushed to hear my cries. I had reached the point of no point—no point to go on. My tolerance was exceeded. Not only was I unable to reach my Holy Grail pike pond, but I doubted my safe return to the truck.

There is a meme on social media about not messing with kayakers because we know places where a body would never be found. This was one of those places.

I did manage to return to safety, but I didn’t learn my lesson. I’m already searching the maps for more remote fishing holes. If a pike paradise exists, I will find it—because finding fish is what’s important, everything else is gravy. 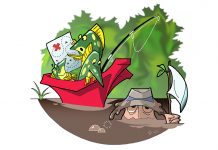 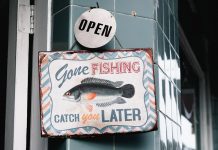