It’s hard to concentrate on your dinner when the two guides are showing off pictures of their latest largemouth catches. The warm dinner rolls at the Coppermill Steakhouse were no match for pictures of five, six and even seven pound bucket-heads. Even though we’d spent a day fishing Nebraska’s Swanson Reservoir, I was still hungry for more largemouth bass action.

Guide Steve Lytle wasted no time finding fish. After my flight into Denver, Colorado was delayed for 2 1/2 hours, we drove another four hours to Trenton, Nebraska. Since we were already behind schedule, we decided to leave the kayaks and take Steve’s boat. We launched at Swanson Reservoir and Steve wasted no time finding fish. The rock jetty next to the boat ramped produced several largemouth strikes before the boat was even ready to run. 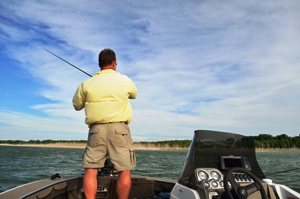 The same wind that swept the Great Plains ripped across the water and would have made for a treacherous paddle; not to mention take up precious time that we did not have. Storm clouds on the West end of the reservoir were rearing up like an enraged bull. The rain and lightning had been following us since leaving the Denver, Colorado airport; which apparently had also been the site of a tornado shortly after our departure.

Across the reservoir there were two spots that Steve wanted to hit before the storm chased us off the water. One was an old railroad track that was now covered with water, tree stumps and large bass. The other was a rocky drop-off where wind was pushing shad down towards the waiting “wipers.” Wipers are a cross between a striped bass and a white bass, also called a hybrid, sand or whiterock bass.

Steve positioned the boat to drift over the edge of the drop off so the shad colored crank baits would mimic the flushing bait. On his second cast he hooked up. Nearly every cast afterwards received a strike and many ended with a fish on the deck. 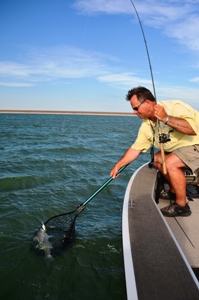 Tomorrow the kayaks are coming out to play. There is a backwater cove in this same reservoir where Kayak Fishing Guide Marty Hughes is more than confident that fat largemouth will be stacked up. Looking at the hawgs on his cell phone, I take his word; even if he is a fisherman.

Stay tuned for the rest of my trip around southwest Nebraska. Future posts include the Box Butte Reservoir, Lake McConaughy and the Valentine National Wildlife Refuge, which Marty Hughes called, “Little Canada”.