X
2022 Rapid Media
Home Hotspots Fishing Reports 31 Days: Living Through An Online Tourney
Facebook
Twitter
Pinterest
Email
Mix
The sight of so much red in the whites of my eyes startled me. It was 5:20 a.m. and I was fifteen minutes into a drive to the Susquehanna River for the final day of a month long online tournament. I wondered, “Did I hit my eye in my sleep and burst a blood vessel?” Leaning forward to look closer into my rear view mirror while driving 58 miles per hour, I decided that it was just the cumulative result of too much fishing and not enough sleep.
I had spent a total of six nights and two days on Lake Marburg and another five days on the Susquehanna River in an effort to have the largest sum total of inches from three bass. At that moment, I held a tie for second place with a total of 61.75 inches: three smallmouth 21 inches, 20.5 inches and 20.25 inches. A 20.75 inch smallmouth would give me the lead. Actually, because the other angler who had 61.75 inches had one fish longer than any of mine, I was in third. In any case, I needed fish better than 20.25 inches to advance.
The month long competition had been marked by lead change after lead change. Thanks to an online “live scoring” board, all 52 anglers in the Mid Atlantic Kayak Bass Fishing July Challenge could keep track of who caught what and when. Many anglers, like Alberto Tabian and Dave Thompson fished through the week after work each day, so the action was far from limited to the usual weekend trips. I had been tied for first early in the month, once in a three way tie.
Posting on Facebook, tagging the other two anglers I was tied with, I called them out, saying “Come on Chris Watts and Matt Yuschak, someone needs to break this tie!”  Matt obliged rather quickly with another largemouth over 20 inches. I asked for it.  Jeffrey Rabbit quickly made that lead change meaningless with the first total over 60 inches.

My own focus early in the month was on largemouth. One particularly large fish from day three at 11:34 p.m. is still haunting me. I knew that I had to throw something that would be heard and tracked by only the largest bass while fishing at night. The near full moon was obscured by overcast skies. I chose a River2Sea Whopper Plopper. It enters the water with the force of someone dropping a brick out of an airplane. It then proceeds to travel across the surface with the sort of water sputtering that could be replicated with a gas powered weed whacker. It doesn’t usually get bit unless it’s by something huge.
A huge something took it under following a shoreline cast. I could feel it dive into submerged weeds, and by the way it readily pulled my drag while pulling my kayak out into deeper water, I assumed that it was one of the many Musky in Lake Marburg. I sort of thought, “This will be interesting – my first Marburg Musky. I’ll release it and get back to trying for a big bass.” By the time I brought the fish to the side of the kayak, I clicked on the little LED light clip on the brim of my baseball cap.
Turning to get the first glimpse of the toothy critter, I instead saw green, white and a well defined big black blotchy stripe. Reaching for my net, I could feel an early tournament lead coming on. As the net dipped into the water, the big plug popped up, the fish faded into the dark lake. A smothering feeling of despair washed over me. This wasn’t the last, “If I could have only landed that fish” moment of the tournament, but it was the worst.
By the last day, I had given up on largemouth. I’m just a better smallmouth than largemouth angler. On each of the first few trips to the river, I caught a 20 inch or better smallmouth. My total grew, but I never quite got back to the lead, or a tie for the lead. A second place tie was all I could muster, but the lead always seemed to be a quarter or a half an inch away.
My total of 61.75 was built upon a bottom bashing crankbait bite. It catered to the river smallmouths propensity to forage on the crawfish that seem to inhabit every third rock on the bottom of that river.  Dave Thompson and I discussed the forage base on one of our many phone calls about the tournament standings throughout the month. He summed up why the Susquehanna grows so many big smallmouth with this analogy; “If I lived in a house that had a plate of chocolate chip cookies on every counter, chair, bookshelf or table top, I would get big and fat too!” 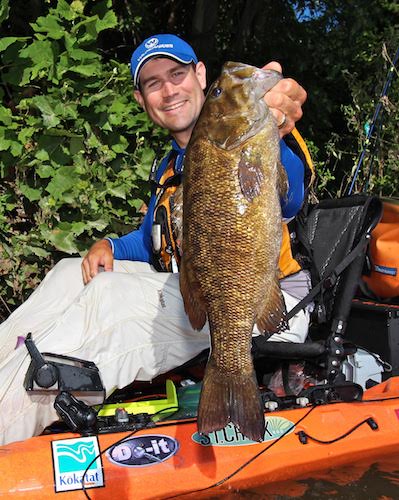 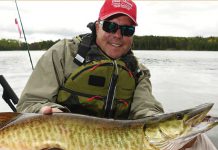 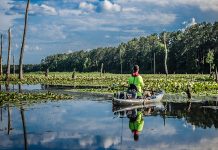 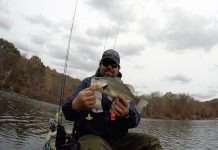